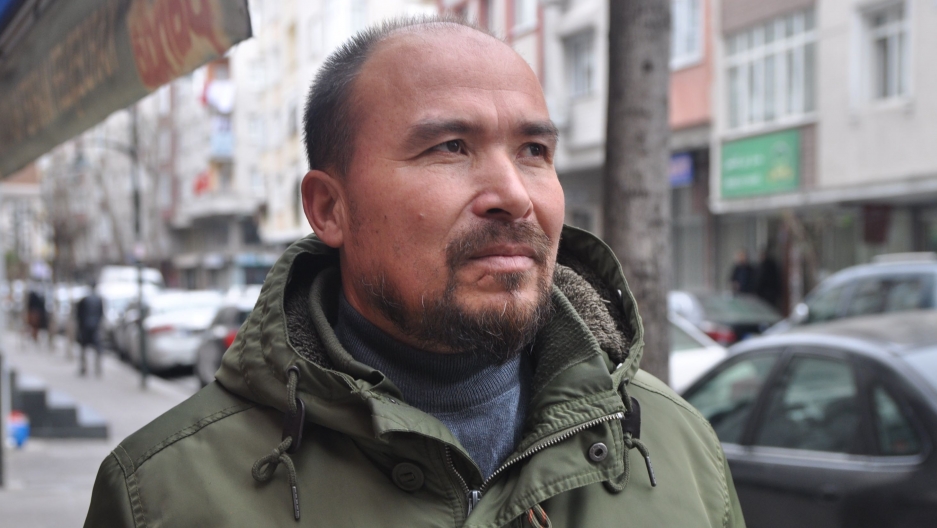 Turgunjan Tursun is a father of four boys, but he hasn’t seen them in five years, ever since he fled from China’s Xinjiang Province to Turkey, after the country’s brutal crackdown on Uighurs and other predominantly Muslim ethnic minorities.

Turgunjan Tursun is a father of four boys, but he hasn’t seen them in five years.

That's when China unleashed a brutal crackdown on Uighurs and other predominantly Muslim ethnic minorities living in the Xinjiang region. Tursun fled to avoid arrest, but a plan to get his family out of the country failed at the last moment.

“I didn’t know what happened to them,” said Tursun, who once owned a real estate business in Xinjiang and now lives in Istanbul. “I assumed they were arrested.”

Using mapping software and leaked government documents, human rights observers estimate that the Chinese government has detained up to a million people, many of them ethnic Uighurs, in so-called “re-education camps.” Former detainees recount being forced to sing patriotic songs, speak Mandarin Chinese and being beaten and starved if they do not comply. Chinese government officials and state-run news outlets maintain that the camps are job training centers, part of a national effort to prevent extremism.

Uighurs in China risk detention if they try to communicate with relatives living abroad, leaving their families to wonder if they are alive or dead.

As Tursun sits in a chilly, basement-level bookstore in Istanbul, he lovingly swipes through photographs of his family on his phone. The images were sent through intermediaries — friends of friends who were able to leave China in 2016 and brought news of his family. 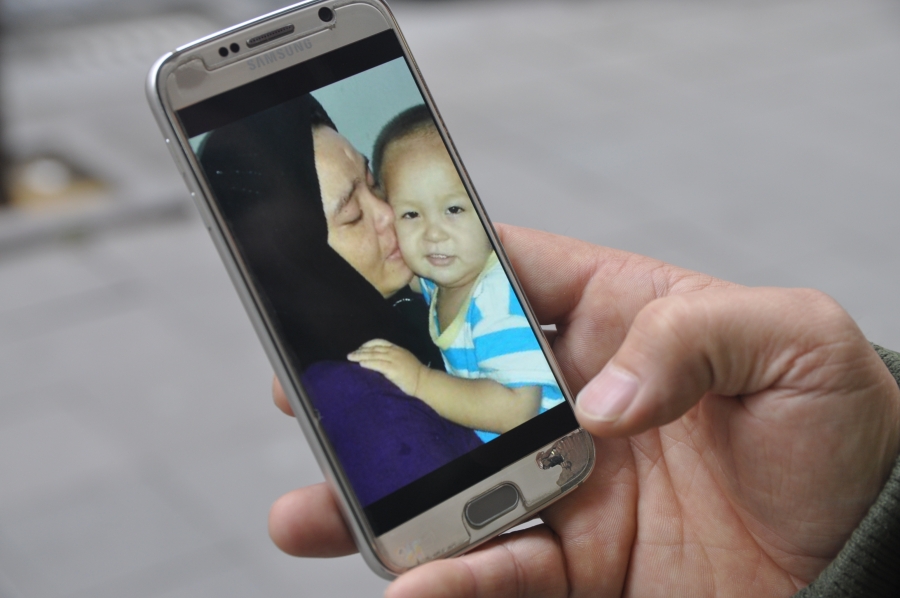 As Tursun sits in a chilly, basement-level bookstore in Istanbul, he lovingly swipes through photographs of his family on his phone. The images were sent through intermediaries — friends of friends who were able to leave China in 2016 and brought news of his family.

For three years, this is how he has begun to piece together what happened.

He knows this: In the fall of 2015, his wife and four sons headed for the Chinese border. At the time, his three older sons were ages 20, 14 and 6, while his youngest was just a few months old. His oldest son, who is particularly bright, learned some English to ease their passage.

But the family never made it out of China. Tursun was told his oldest son was arrested as well as an 18-year-old nephew. He suspects they were targeted because they had communicated with him through encrypted apps. The two youngest children were taken away from his wife. He hopes they are with their grandparents, but they may be in one of the state-run orphanages where China is reported to be keeping the children of detained Uighurs. As for his second-oldest son, he’s had no news.

“I want to ask this question — for Uighurs here in Istanbul, why can’t we call our parents and cannot call our family members?” Tursun said through an interpreter. “We don’t know what’s happening there. If they are not oppressing us, why cannot we call them?”

“I want to ask this question — for Uighurs here in Istanbul, why can’t we call our parents and cannot call our family members?” Tursun said through an interpreter. “We don’t know what’s happening there. If they are not oppressing us, why cannot we call them?”

According to Maya Wang, a senior analyst for Human Rights Watch in Hong Kong, Tursun’s family is not unusual.

Even storing large amounts of food, owning a tent or buying exercise equipment are listed among 75 indicators of “extremism” in Chinese government documents uncovered by Human Rights Watch, she said. 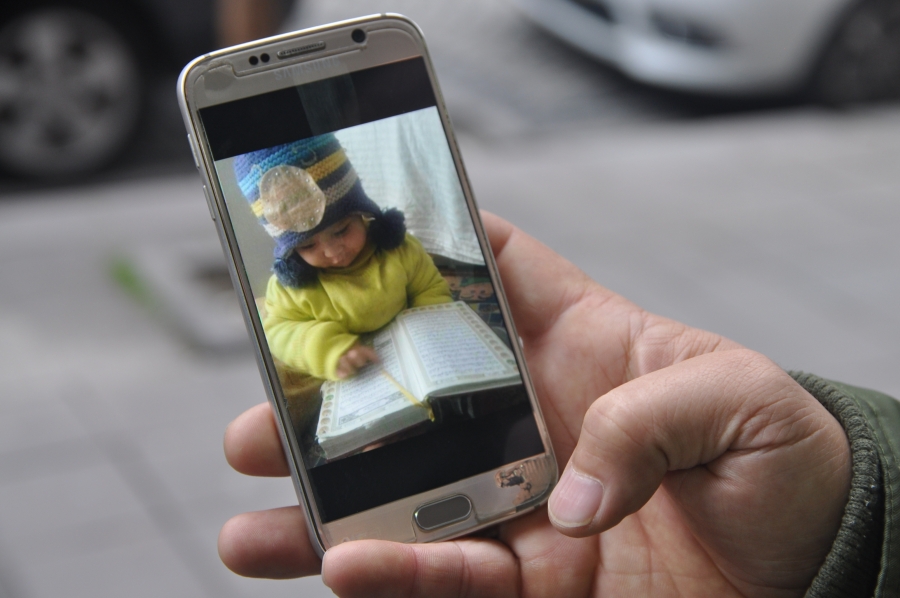 Turgunjan Tursun scrolls through photos of his family on his phone.

Uighurs are a predominantly Muslim ethnic minority in China, descended from a Turkic empire that controlled the Central Asian steppes in the eighth and ninth centuries. Their language is similar to Turkish but written in Arabic script. A separatist movement claims Xinjiang should be an independent nation, called East Turkestan.

China’s crackdown on Uighurs and other ethnic minorities began in 2009 after riots in Xinjiang Province killed almost 200 people, many of them from the Han Chinese majority. The country launched a “Strike Hard” campaign to control Xinjiang’s population. An initial ban on long beards and wearing veils has escalated into a massive system of detention, surveillance and control.

There have been international calls to condemn and sanction China over its treatment of Muslim ethnic minorities. But critics say it doesn’t go much beyond that, in part, because of China’s clout.

On Saturday, Turkish leaders broke a yearslong silence on the fate of the Uighurs after the reported death of folk poet Abdurehim Heyit while in detention.

In a statement, the Turkish Foreign Ministry called on China to “respect the fundamental human rights of Uighur Turks and to close the internment camps.”

“The policy of systematic assimilation against the Uighur Turks carried out by the authorities of China is a great shame for humanity,” read the message, attributed to ministry spokesman Hami Aksoy.

In 2016, China recalled passports held by Uighurs in Xinjiang. The application process to get a passport back is difficult, so only a small minority have been able to leave the country, said Wang of Human Rights Watch. With life in Xinjiang now heavily monitored, and communications out of the country cut off, people have no choice but to conform.

“It’s about people having their identity re-engineered."

“It’s about people having their identity re-engineered,” Wang said. “It’s a conversion process.”

Safe in Turkey, but far from secure

Istanbul has boasted a sizable Uighur community since the 1950s, after Chinese Communist Party troops took control of Xinjiang in 1949. An estimated 30,000-50,000 Uighurs live in Turkey today.

Within a few blocks of Istanbul’s Zeytinburnu neighborhood, you can visit a Uighur halal butcher, or a restaurant serving Uighur noodle dishes and crispy bread. Nearby, you can stop by a Uighur-owned publishing house for titles about the history of Xinjiang Province. A Uighur translation of George Orwell’s “Animal Farm” sits in the window.

Tursun says he chose to come here because the Uighur language is so similar to Turkish. He figured that would make it easier to find a job to support his family.

“I used to run a company; I can drive a car; I can do construction,” he said.

“So, Uighurs do very dirty, very low-income jobs,” Tursun said. “Even doing this, we feel afraid because of the working permission.”

No way to get a message home

Though sparse news of Tursun’s family has found its way to him from 2,930 miles away, it’s close to impossible to try and send a message back. Though sharing his full name publicly may carry a risk back home, he feels it is the only way to draw international attention to the Uighurs’ plight.

“If they can hear … I want to tell them that I’m not here to escape, to leave you alone,” Tursun said. “I’m here to save you, I tried to save you.”

He fears that his two youngest — now 4 and 9 years old — believe he abandoned them. 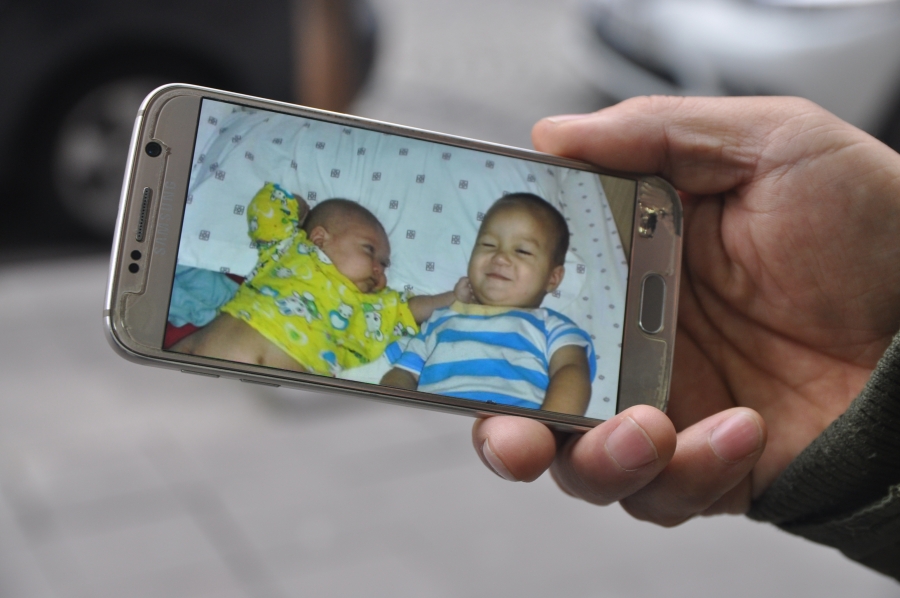 Turgunjan Tursun is a father of four boys, but he hasn’t seen them in five years.

Translations and additional reporting for this story were provided by Abduweli Ayup.