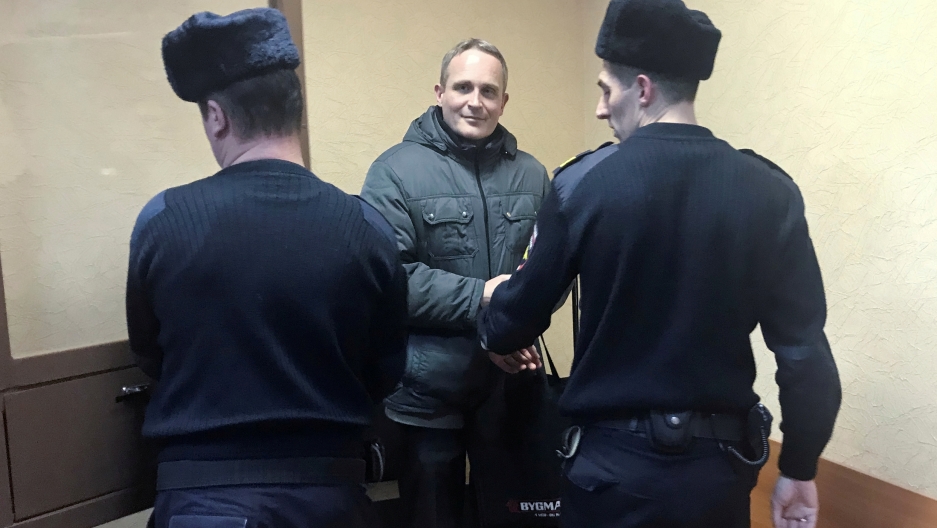 Dennis Christensen, a Jehovah's Witness accused of extremism, leaves after a court session in handcuffs in the town of Oryol, Russia, Jan. 14, 2019.

A Russian court on Wednesday found a Danish adherent of the Jehovah's Witnesses guilty of organizing a banned extremist group and jailed him for six years in a case critics condemn as crushing religious freedom.

Armed police detained Dennis Christensen, a 46-year-old builder, in May 2017 at a prayer meeting in Oryol, some 200 miles south of Moscow after a court in the region outlawed the local Jehovah's Witnesses a year earlier.

The court in the city of Oryol on Wednesday found Christiansen guilty after a long trial, his lawyer, his wife and a representative for the Jehovah's Witnesses told Reuters.

Christiansen had pleaded innocent, saying he was exercising freedom of religion guaranteed in Russia's constitution.

Danish Foreign Minister Anders Samuelsen called on Moscow to respect religious freedom and criticized it for classifying Jehovah's Witnesses on a par with terrorist groups.

The US-headquartered Jehovah's Witnesses have been under pressure for years in Russia, where the dominant Orthodox Church is championed by President Vladimir Putin. Orthodox scholars have cast them as a dangerous foreign sect that erodes state institutions and traditional values, allegations they reject.

But Russia's latest falling-out with the West, triggered by Moscow's annexation of Crimea from Ukraine in 2014, spurred a more determined drive to push out "the enemy within."

With about 170,000 followers in Russia and 8 million worldwide, Jehovah's Witnesses are a Christian denomination known for door-to-door preaching, close Bible study, and rejection of military service and blood transfusions.

They believe the end of the world as we know it is imminent, an event "the obedient" will survive to inhabit the Kingdom of God they believe will follow.

Christiansen moved to Murmansk in northern Russia in 2000 where the Jehovah's Witnesses were already well established and met his wife Irina there. The couple later moved to Oryol because the climate is milder and housing cheaper.

He speaks Russian and says he is a fan of Russian culture.

Anton Bogdanov, Christiansen's lawyer, said he planned to appeal Wednesday's verdict, which he termed illegal and feared would set a dangerous precedent.

More than 100 criminal cases have been opened against Jehovah's Witnesses, with another 24 people in prison awaiting or on trial and a similar number under house arrest. Some of their publications are on a list of banned literature.

Yaroslav Sivulsky, a representative of the European Association of Jehovah's Witnesses, said the verdict evoked the atheist Soviet period when Moscow persecuted the group.

"In essence, we have returned to Soviet times," said Sivulsky, whose own father Pavel was jailed for seven years in 1959 for printing bible literature. "It's sad that in the 21st century people are being jailed for holding what the authorities believe to be the wrong beliefs."

Dmitry Peskov, a Kremlin spokesman, said there were clear reasons for Christiansen's arrest but he was unaware of details.

Irina, Christiansen's wife, said she and her husband were calm despite what they saw as an injustice. Before the verdict, she said state TV had nurtured existing widespread prejudice in Russian society against Jehovah's Witnesses, a strategy she said helped distract people from low living standards.