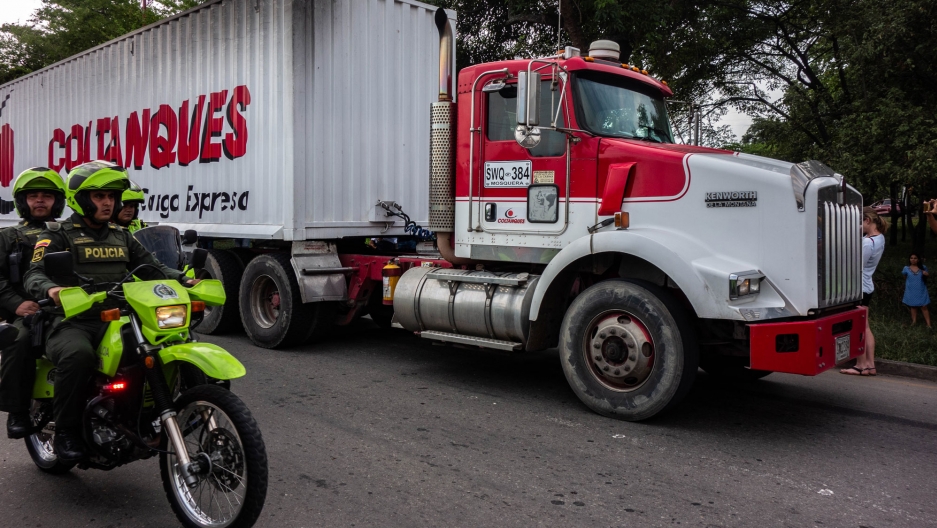 A convoy of trucks carrying humanitarian aid arrives in Cúcuta, Colombia, intended to cross the border into Venezuela, but the day before, the Venezuelan military blockaded the road, preventing aid from entering the country. The photo was taken Feb. 7, 2019, Cúcuta, Colombia.

The first convoy of trucks carrying 50 tons of aid for crisis-stricken Venezuela arrived at the humid, Colombian-Venezuelan border town of Cúcuta on Thursday afternoon. Their arrival comes a day after the Venezuelan military barricaded the bridge set to transport the aid with overturned trucks and a giant oil tanker.

Escorted by siren-lit police vans and motorcycles on the main road leading to the bridge, skirted on all sides by cameras and TV crews keen for a glimpse, the much-anticipated trucks were met by the sounds of car horns, applause and people shouting, “Free Venezuela!”

Venezuelans in Cúcuta waiting under the beating sun were lifted by the arrival of the giant trucks and held aloft signs that read: “Maduro Out,” and “Humanitarian Aid Now,” in protest of Venezuela’s spiraling economic and political crisis and President Nicolás Maduro’s continued grasp for power.

But as the fence slowly closed behind the two articulated lorries — and the seven smaller vehicles that trailed them — the press quickly dispersed, and hope retreated in favor of logistics. The challenge is now getting aid across the border.

The decision to send aid across the border is also a provocation to Maduro’s military to disobey his orders to reject it.

Fresh-faced Venezuelan opposition leader Juan Guiadó announced the aid on Jan. 31 and the United States pledged $20 million in support. The US and Colombia, along with a coalition of international donors, orchestrated this first initiative to send food, medical supplies, hygiene kits and nutritional products to the Venezuelan people via Colombia. Two more deliveries are expected to arrive from Brazil and a yet-to-be-identified Caribbean island later this month. 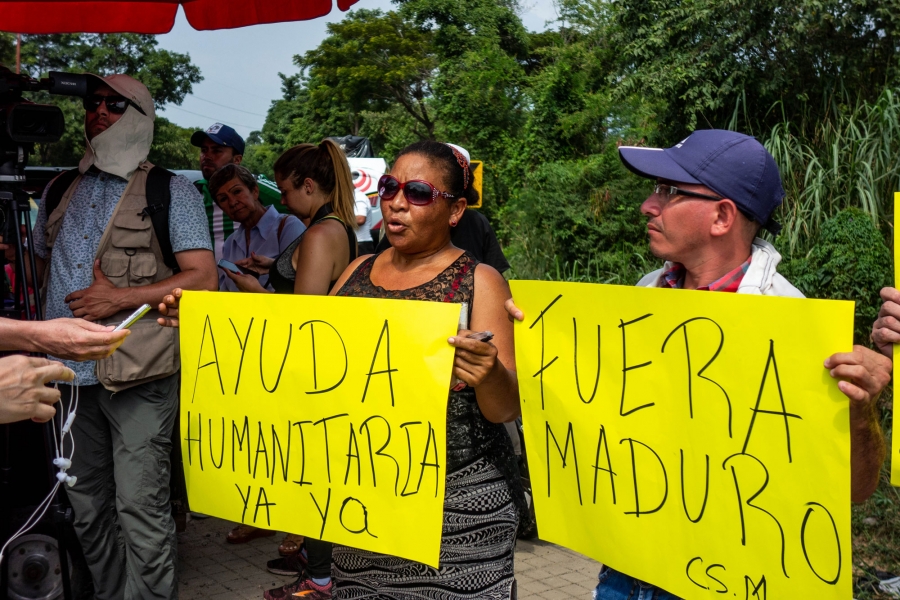 Venezuelans gather at the site of arrival of the aid to protest President Nicolás Maduro's actions and demand that he allow the aid to pass the border. Photo taken in Cúcuta, Colombia, Feb. 7, 2019.

Despite the mass exodus of 3 million Venezuelans due to severe shortages of basic needs, Maduro has consistently denied the existence of a humanitarian crisis and labeled the efforts to send in aid a US-led plot to depose him. The decision to send aid across the border is also a provocation to Maduro’s military to disobey his orders to reject it.

Maduro must increasingly rely on his military as popular support dwindles and more countries back Guaidó, who invoked constitutional powers on Jan. 23 to assume the role of interim president while calling for fresh elections. Many have accused Maduro of holding sham elections in May 2018, among other constitutional and human rights violations. Many European, North American and Latin American nations have rushed to recognize Guiadó as legitimate.

Tienditas, the vast, three-lane bridge that connects the two neighboring countries, was built in 2016, but its inauguration delayed due to political disagreements between the two countries. Authorities finally decided to open it as the aid’s pathway into Venezuela, but the Venezuelan military shut off the bridge with a makeshift blockade consisting of two giant, overturned trucks and an oil tanker in anticipation of its arrival.

The boxes that could potentially save lives now sit in warehouses indefinitely until authorities hatch a solution. 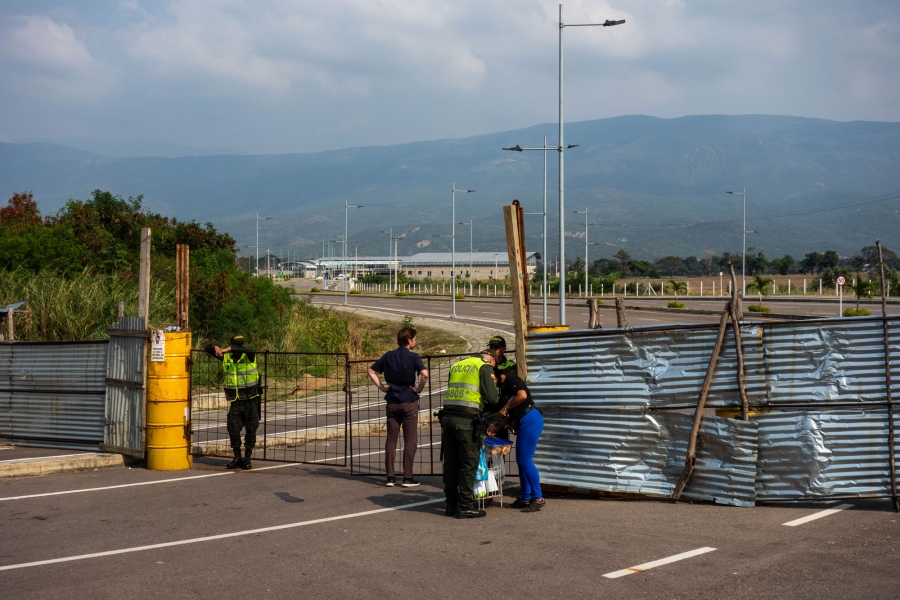 The Colombian police stand watch over the Tienditas bridge which was set to transport aid to Venezuela but is now barricaded off. The photo was taken on Feb. 6, 2019, Cúcuta, Colombia.

“Maduro, put your hand on your heart, stop being selfish, and open the bridge so the aid can enter."

“Maduro, put your hand on your heart, stop being selfish, and open the bridge so the aid can enter,” pleaded Albertina Aguei, 49, one of several Venezuelan demonstrators holding up a sign. “While he is there relaxed, there are many hospitals without supplies and kids dying. There are mothers, fathers and the elderly who need humanitarian assistance,” Aguei said.

Poor economic management and rampant corruption have left the world’s most oil-rich nation facing widespread food and medicine shortages and hyperinflation of over 1 million percent, rendering even the most basic of items unaffordable.

Twenty minutes away from Tienditas, nearly 40,000 people cross the chaotic Simón Bolívar bridge into Colombia from Venezuela each day to flee, buy goods or seek refuge.

“We are dying of hunger, we have no work, we have nothing,” said Carina Melendez, 27, from Maracaibo, standing on a dusty dirt track next to an illegal border crossing utilized by scrap metal and gas smugglers.

“It’s the most despicable human act that the government impedes aid only for pride, and to say, ‘There in Venezuela, you don’t need anything,’” said Dalia Guerrero, who crosses the border several times a week to buy milk and diapers for her two babies. “They don’t let us work or give us opportunities, neither do they let us be free or let other countries help us.” 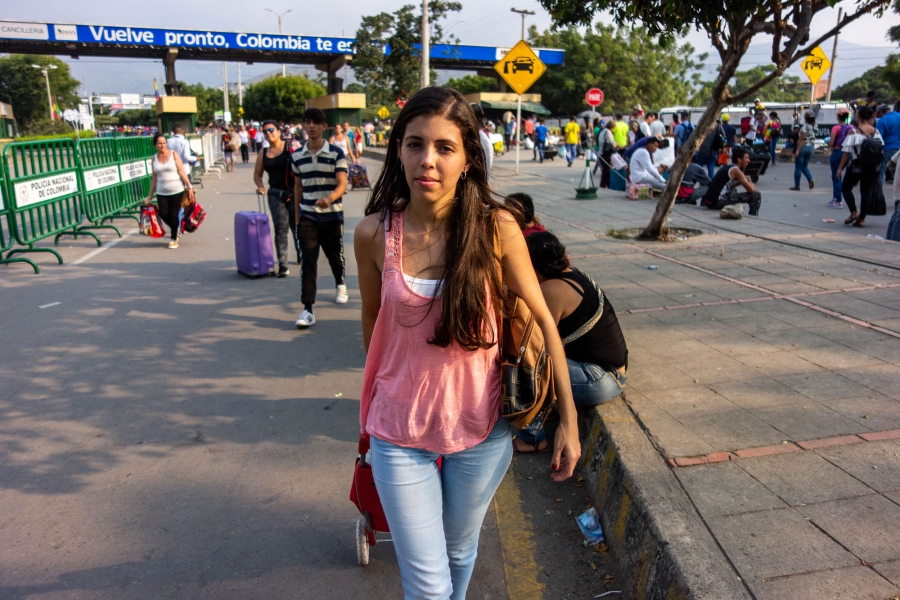 Venezuelan Dalia Guerrero regularly crosses the border into Colombia to purchases basic goods for her two babies. The photo was taken on Feb. 6, 2019, Cúcuta, Colombia.

Some analysts say the impetus behind the efforts to send supplies across the border is largely political rather than altruistic, with Venezuela’s humanitarian crisis being capitalized on for political gain.

The maneuver now places Maduro in a lose-lose situation. If the military disobeys Maduro’s orders and lets the aid in, it would undermine their loyalty, which is increasingly vital in propping up his unpopular rule. And if they deny it, he will be slammed for denying food to the 300,000 whom Guiadó says are “starving of hunger.”

“It’s less about actually channeling aid to the Venezuelan people than it is about a very clever push to encourage a split within the armed forces."

“It’s less about actually channeling aid to the Venezuelan people than it is about a very clever push to encourage a split within the armed forces,” said Geoff Ramsey, Venezuela director at the Washington Office on Latin America.

The Red Cross has criticized the plan to send in aid without Venezuela’s cooperation and has said any efforts should be "shielded from this political conversation.”

The tone surrounding the aid has become particularly political in recent days. Sen. Marco Rubio, a vocal anti-Maduro critic, tweeted that the future of military leaders in Venezuela will depend on their response to the incoming aid.

Guiadó himself has described it as a “new test” for the armed forces. 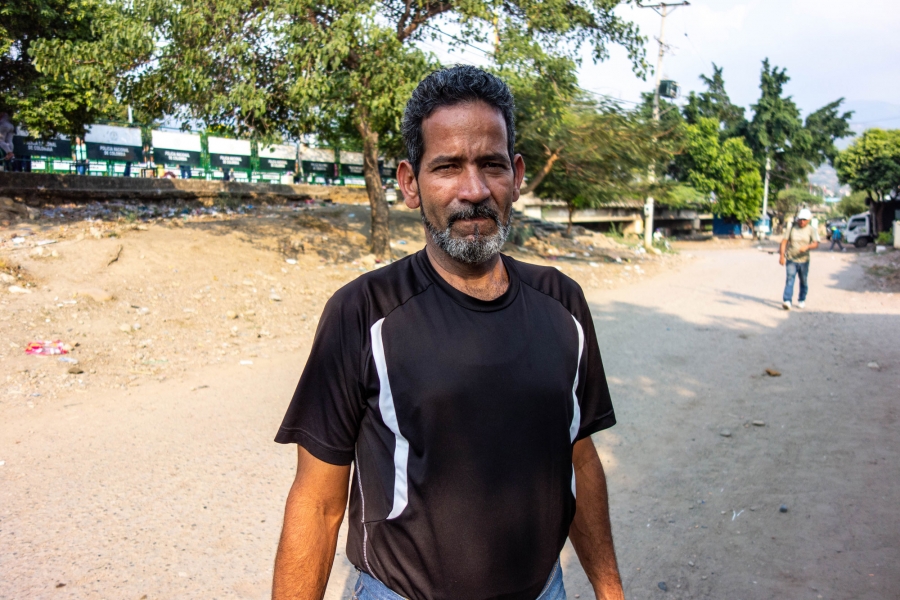 Jose Miguel, from Venezuela, is afraid Maduro's National Guard will confiscate any humanitarian aid that makes it over the border for their own gain. The photo was taken on Feb. 6, 2019, Cúcuta, Colombia.

It remains unclear how the aid can now be transported across the border without sparking conflict, and US and Colombian officials refused to comment on their motives and strategy to get the supplies across the border.

But for those fleeing the crisis, they are less concerned about how the aid gets into Venezuela or the political motives behind it — they want to know what happens once it gets there.

“The National Guard [of Venezuela] will steal everything; they strip you naked until they find the last dollar,” said Jose Miguel, 56, who struggles to make ends meet in Cúcuta and says national security services will continue compounding the suffering of the poor.

“They will rob everything.”