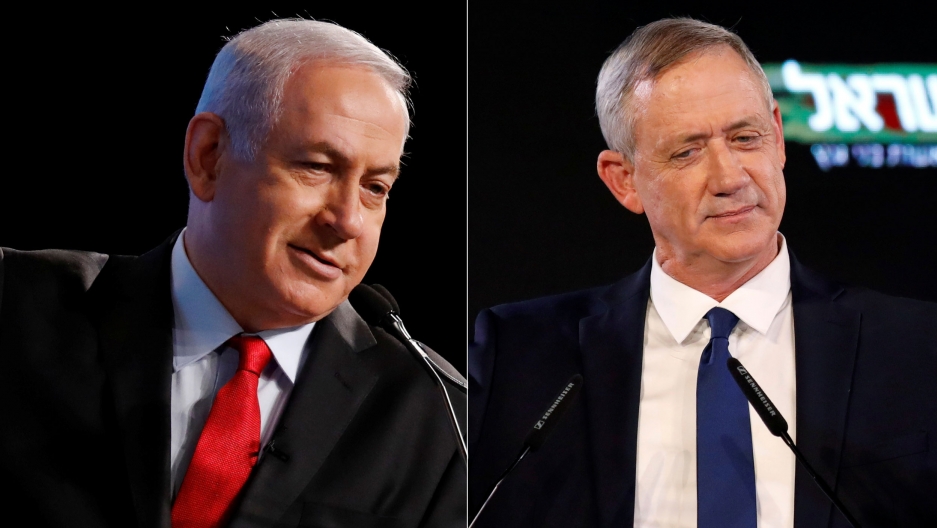 For the first time in a decade, Israeli Prime Minister Benjamin Netanyahu (left) has a serious challenger: Benny Gantz (right). The former chief of staff and military general launched his own party last month, quickly proving to be Netanyahu’s toughest competitor for prime minister.

In April, Israelis will vote in national elections, and if re-elected, Benjamin Netanyahu will become the country’s longest-sitting prime minister. Netanyahu — often called Mr. Security, has held power since 2009 and ranks first in polls despite his corruption allegations and a looming indictment.

Netanyahu’s fragile, right-wing coalition dissolved the Knesset (Israeli parliament) in December and called for early elections amid struggles over a military draft rule for Orthodox Jews.

Now, for the first time in a decade, Netanyahu has a serious challenger: Benjamin "Benny" Gantz, former chief of staff, launched his own party last month, quickly proving to be Netanyahu’s toughest competitor for prime minister.

Gantz’s Israel Resilience Party was estimated to win more than 20 seats in parliament just one day after his inaugural campaign event, according to polls by local media. The increase puts his party second only to Netanyahu’s right-wing, Likud party, estimated to win around 30 seats.

No party is likely to win a majority in the Knesset and that means any leader would need to form a coalition to govern.

Unseating Netanyahu is unlikely, but the prime minister is facing corruption charges — he’s accused in three separate cases of doing favors for one of Israel’s biggest telecom companies, Bezeq, in return for favorable media coverage, among other charges. And it’s possible that by the April election, Netanyahu could be indicted on these corruption charges. Netanyahu has pledged not to resign even if he is indicted and his case eventually goes to court.

Related: This Israeli Facebook group is a lifeline for women caught in a cycle of prostitution

At his Jan. 2 campaign launch in Tel Aviv, Gantz pledged a “zero tolerance” policy for corruption.

“The notion that in Israel, a prime minister can remain in office while under indictment is ridiculous."

“The notion that in Israel, a prime minister can remain in office while under indictment is ridiculous,” he told the crowd at the rally, taking a direct stab at the prime minister.

But most of all, Gantz seems eager to make it clear that he can be Israel’s Mr. Security and brush off accusations that he’s a leftist — an increasingly unpopular label in Israel lobbed at those who don’t take a strong national defense stance.

At Gantz’s rally, screens behind him flashed phrases like, “Israel before all else,” in white and army-green letters. Moshe Ya'alon, another former Israel Defense Forces chief, joined Gantz on stage to announce his support for Gantz and to show that generals will likely join forces for the elections. There are rumors that a third former general, Gabi Ashkenazi, could join, as well.

Before the rally, Gantz released a series of videos themed "only the strong survive," listing military accomplishments of the Israel Defense Forces under Gantz’s leadership.

Related: Israel-Gaza border ignites in most serious fighting since 2014 war

One shows a Gaza neighborhood destroyed in the 2014 Israeli offensive — which Gantz led as head of Israel’s army.

Captions say 6,231 targets were destroyed, and 1,364 terrorists were killed. The video boasts that “parts of Gaza were returned to the Stone Age” and that it resulted in 3 1/2 years of relative quiet.

The UN says more than 1,400 Palestinian civilians were killed in that offensive. But despite Gantz’s military bragging, Gantz’s opponents have accused him of being too soft, too far left — something Gantz is trying to escape.

“There is no more right or left, just Israel — before all else,” blasted his theme song from the speaker at the Tel Aviv Convention Center as the crowd waved Israeli flags and chanted his name.

Gantz has promised to revise Israel’s controversial, nation-state law passed in July, reasserting Israel’s Jewish character and downgrading Arabic from an official language to special status. Critics in Israel and abroad say the law is discriminatory toward the one-quarter of non-Jewish Israelis, mostly Palestinians.

Gantz also talked about the importance of making peace with Israel’s foes. Another video shows a series of Israeli leaders meeting with Arab heads of state for peace talks over the decades since Israel’s founding. He says there is no shame in making peace and asks Israelis, “In 25 years, do we still want to be sending our children to fight?”

It’s a departure from Netanyahu's hard-line rhetoric and has opened him up to attack from Israel’s far-right.

Israeli journalist Gad Harel says decades of a failed peace process with the Palestinians has pushed Israelis to the right over the decades.

“They say left is no good,” said Harel at the campaign launch. “A lot of people, they don’t like it.”

But Israeli resident Albert Shaltiel, who also attended the rally, says he doesn’t see a big difference between Gantz and Netanyahu when it comes to their platforms and policies.

“He’s not much different than a Likud,” said Shaltiel. “He has the same … political opinion as Netanyahu. It’s very much similar.”

Gantz echoed Netanyahu on Israel’s refusal to leave the Syrian Golan Heights, which Israel has occupied since the Six-Day War of 1967 and pledged to keep Jerusalem united for the Jewish people — most of the international community recognizes east Jerusalem as occupied territory.

Despite the corruption allegations, Shaltiel thinks Netanyahu should continue as prime minister, citing Gantz’s lack of civilian political experience. Gantz was a good military leader, but Israeli politics are too complicated for him to move from military head to head of state, Shaltiel said.

“Generals are good to salute, but not to vote for,” he added.