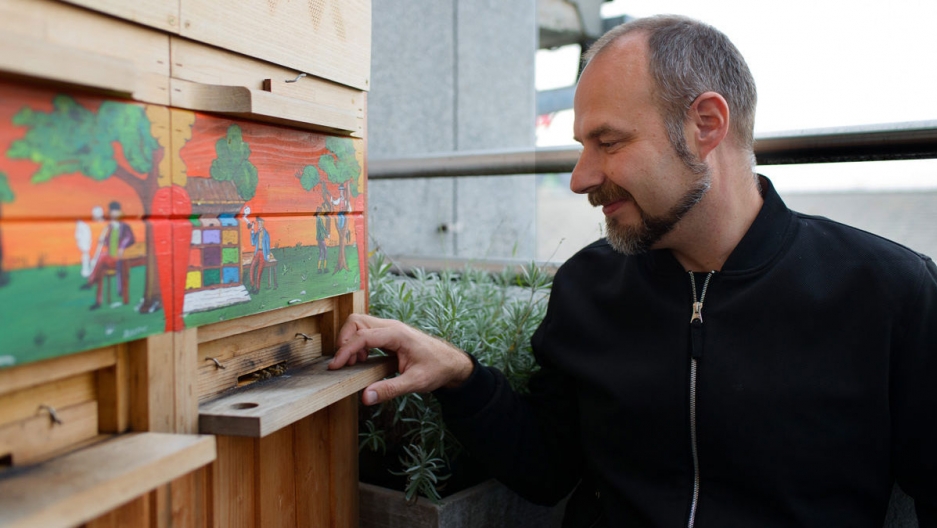 Gorazd Trušnovec, a professional beekeeper in Ljubljana, tends to the beehives on the balcony of the offices of the prime minister of Slovenia.

Bees swarm in and out of a wooden hive on the balcony outside the office Marjan Šarec, the prime minister of Slovenia. It’s early November in the tiny nation’s capital, Ljubljana, and the city’s bees are busy collecting the last bits of pollen to prepare for a long, deep winter sleep.

Bee colonies have faced massive declines around the globe, prompting doomsday scenarios of a world without these vital pollinators, but in Slovenia, such worries are almost unheard of. Colonies are thriving here, exemplified not only by the healthy hives the country’s top politician keeps, and the jars of honey he gifts foreign dignitaries.

Wedged between Italy, Croatia, and Austria, Slovenia boasts about 10,000 beekeepers among its population of just over 2 million — about five for every 1,000 people. In the US, on the other hand, there’re an estimated 125,000 beekeepers for a nation of 327 million, or about 0.4 per 1,000 people. Many attribute this concentration of experts to the Slovenian people’s ingrained love for bees and honey, the country’s historic ties to beekeeping, and a government that recognized the benefits to the economy early on.

“Maybe taking care of bees is just in our blood,” says urban beekeeper Gorazd Trušnovec (pictured above), who inspects the health of the prime minister’s colony as well as dozens of others around Ljubljana.

In the US, about 60 percent of honey is produced by commercial beekeepers, who own more than 300 hives. Many of them will be on the move this spring, when about 1.5 million hives are needed to pollinate California’s millions of almond tree blossoms. By pollinating trees and other plants, honeybees contribute an estimated $15 billion to the US economy, and are said to help produce every third bite of food we eat.

Between April 2017 and April 2018, however, American beekeepers lost about 40 percent of their honey bee colonies to pesticides, habitat loss, fast-spreading diseases, and mite infestations, as well as colony collapse disorder, a puzzling phenomenon that has seen entire hives suddenly die. Rapid loss of pollinators across the world has worried experts, farmers, and policymakers for years. 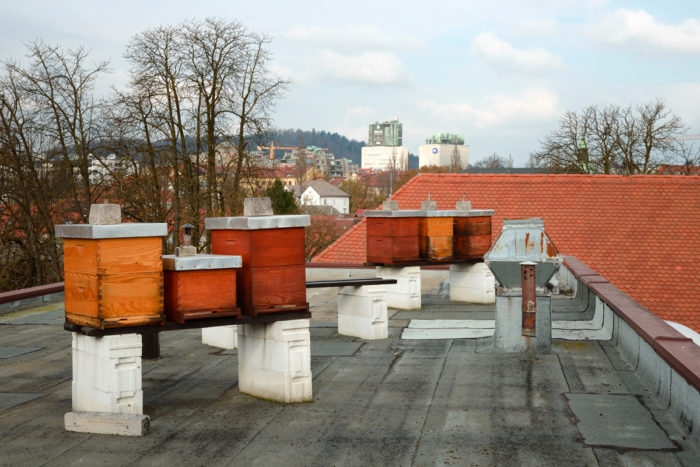 Beehives are set up on the roof of the urban planning institute of the Republic of Slovenia (UIRS).

“The ramifications of pollinator loss, and insect loss generally, is an unraveling of the fabric that holds life on earth together,” says Phyllis Stiles, the founder of Bee City USA, a bee-saving initiative by the Xerces Society for Invertebrate Conservation.

While various initiatives in the US are working to support dwindling bee populations, bee advocates say that what’s needed is a concerted, nationwide effort to protect bees and other pollinators — and that’s where Slovenia’s lessons enter the picture.

“Beekeeping is something we just really like to do,” says Nika Jere, whose family uses its 300 beehives to produce not only different types of honey like acacia, but also mead, which is made by fermenting honey and water, and is the world’s oldest known alcoholic beverage. They’re among the biggest producers of honey in Slovenia, she says, and the entire family —Nika, her parents and her brother — are in the beekeeping business.

Turning their business into a success has taken a lot of hard work, but they’ve had a strong ally along the way: the Slovenian government. In recent years, the nation has put in place a number of policies and regulations to protect bees, which could serve as a model for nations interested in sustainable beekeeping and healthy colonies.

In 2002, the government put the local honeybee—the docile, industrious Carniolan bee—under conservation status, which has helped raise public awareness and regulate breeding: To keep the Carniolan strong and relatively resistant to diseases, no other species of honeybees can be imported to Slovenia, and trading of the bees is regulated. 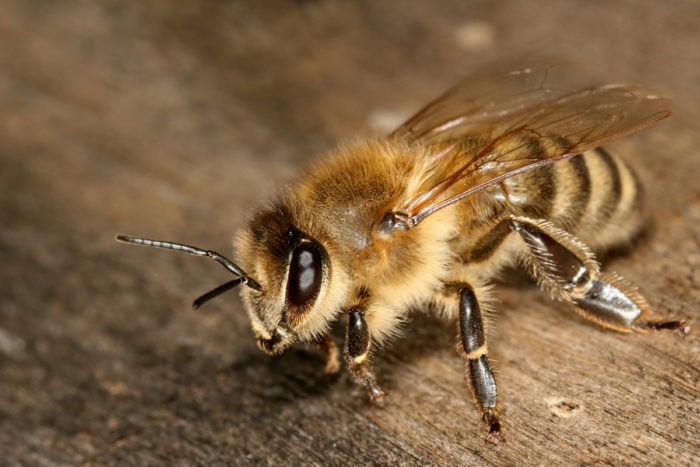 While the beekeeping association and the government are hoping to see bees protected as an endangered species across the E.U., they have already managed to get the tiny pollinators honored with the first annual World Bee Day, which the United Nations recognized on May 20 last year—the birthday of Slovenian Anton Janša, the forefather of modern beekeeping. Janša, who lived from 1734 to 1773, designed stackable hives, and became the first to teach professional beekeeping at the imperial court in Vienna in the 18th century. Ask any Slovenian about the country’s love for bees, and they will tell you about Janša.

For those wishing to follow in Janša’s footsteps today, the Slovenian government has set up training courses that ensure that future beekeepers have the necessary knowledge and experience to keep bees, such as the ability to recognize an infestation of pests like the Varroa, a deadly blood-sucking mite. (Such pests could quickly spread from hive to hive, beekeeper to beekeeper, and threaten entire beekeeping industries; this is already happening in the US, where the mite has spread rapidly since the ’80s, affecting more than half of all hives.)

Slovenia also distributes free medication and treatment to combat the mites. Should that not help, the government offers a full refund for infected hives, thus stopping the plague from spreading further.

Although most Slovenian beekeepers have never experienced colony collapse disorder, beekeeping here, too, has faced difficulties. Around 2011, some areas saw a dramatic number of bee deaths believed to be due to the use of pesticides. The government moved quickly and banned a number of pesticides harmful to bees. Jere thinks that these nationwide bans on the use of carcinogenic pesticides, resulting in forests and meadows free of such substances have played a vital role in keeping her family’s colonies healthy. A similar ban was approved E.U.-wide in 2018.

“I think bees here are so healthy because there is so much awareness about how important they are—it’s a hot topic for the public, and beekeepers know their responsibility,” Jere says. “And for the government and the ministry of agriculture, it’s really important as well, so there are a lot of rules and inspections.”

Urban buzz: Beekeeping in the capital

The countryside is not the only place where bees are thriving; they flourish in Ljubljana, too—again, due in part to government regulation. With a population of about 300,000 and about 35,000 trees, the city government stipulates that residents can only grow nectar-producing plants. Chestnut and lime trees, sunflowers, and meadow flowers, as well as herbs like sage and mint, now serve as food sources for the city’s bees. 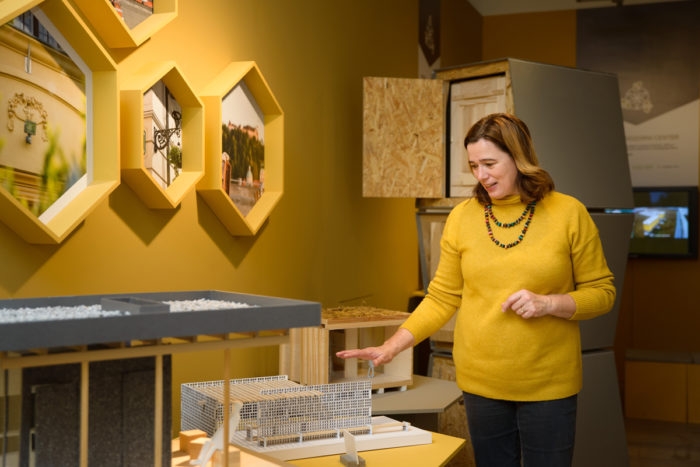 Curator Barbara Sosić guides through the special exhibition “Where the bees are at home” at the Slovene Ethnographic Museum, open through August 2019.

To ensure that there isn’t too much competition for these food sources, the city specifies that only 10 hives be kept per location and that each location be at least a 400-meter radius from the next. Additionally, within the city limits, herbicides and pesticides have both been banned. “It means a lot more work in removing weeds mechanically, but we’re happy to do it,” says Maruška Markovčič, a senior advisor for the city’s department of environmental protection.

Markovčič has helped introduce some of the policies that keep bees healthy today, and she envisions more: She hopes Ljubljana and Slovenia will become known as the world’s first and foremost destinations for apitourism. Indeed, tourists can already stay overnight in honeycomb-shaped chalets and view traditional, wooden hives that depict a wide range of scenes from everyday life as well as religious scenes, such as the devil enticing villagers to harvest honey.

A two-hour guided tour includes a walk down a historic street where honey from across the country is still sold, an introduction into the city’s beekeeping history, and a stop at the City Savings Bank, whose door is adorned with a bee and bee nest—a symbol that attracts customers to deposit their money, just as bees bring their honey back to their hives, says Markovčič. The tour ends at Kolovrat, a traditional Slovenian restaurant which serves honey-inspired dishes like honey panna cotta, along with the Jere family’s mead.

The US, too, has recognized that more needs to be done to save bees—and guarantee the future of agriculture as we know it. President Barack Obama established a Pollinator Health Task Force to address threats to pollinators across the country, but much of this work has now been reversed under President Trump, who, for example, rescinded a ban on pesticides proven harmful to bees in dozens of national wildlife refuges.

Still, some initiatives are growing, such as those of Bee City, which has worked with dozens of colleges—including Auburn University, Vassar College, and Pennsylvania State University—and cities including Washington, D.C., Raleigh, Albuquerque, and Atlanta to create healthier habitats free or nearly free of pesticides and featuring a rich variety of plants. Overall, Bee City has seen pollinator-friendly conservation areas expanded over the course of their work.

Slowly, Americans are recognizing the benefits of Slovenia’s style of beekeeping. Some traditions are already being exported to the US, for instance, a traditional type of hive known as an AŽ, which allows beekeepers to access brood and honey chambers by sliding them out like books from a shelf, as opposed to having to lift each part. From Alaska to Hawaii, hundreds of US beekeepers now use the hives, says Suzanne Brouillette, who has been selling them since 2014.

Brouillette, who lives in New Hampshire, also organizes small study tours to Slovenia each year. The close relationship between beekeepers and the government is a noticeable difference, she says. “They are more involved, on many levels,” she says of Slovenian beekeepers, explaining how, for instance, the nation’s beekeepers association advised on the pesticide ban, and how beekeeping is taught in more than 200 elementary schools, some of which have their own apiaries.

“They do a lot of education with the young and this is critical for the future of all pollinators. We fall way short in this area,” she says.

With better organization and more government support, experts say that similar measures could be implemented in the US. The biggest difference, however, becomes clear when Brouillette lets Slovenian beekeepers speak about their apiaries during her tours. “You have a sense of real love,” she says. And that, she believes, is harder to accomplish.

The original version of this story appeared at Civil Eats.