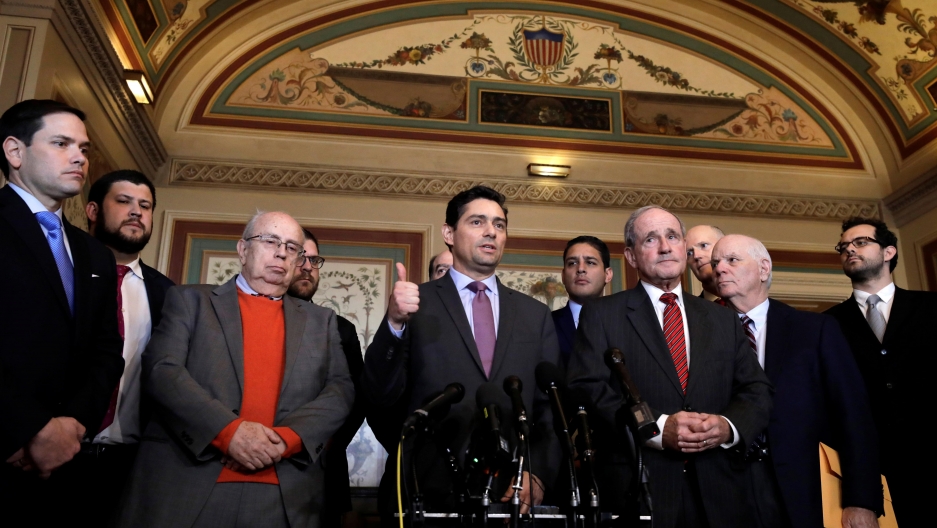 Venezuelan diplomat Carlos Vecchio is an ambassador without an embassy. Vecchio is part of the diplomatic corps representing Juan Guaidó, the self-declared interim president of Venezuela.

It's not an easy gig for Vecchio. Venezuela's embattled President Nicolás Maduro closed down his country's Washington embassy in January.

So, Vecchio is working in borrowed office space. While he waits to get the keys to the embassy, he told The World's Marco Werman that he and his collegues are trying to get control of other Venezuelan assests for Guaidó's administration.

Marco Werman: What can Guaidó's administration get done without an official embassy?

And what is your concern? That the Maduro regime might just try and plunder all that before they get pushed out of power?

Yes, absolutely. I mean, they have destroyed all that we have.

Is any of that legal though? Because as much as you want to recognize Juan Guaidó as the president, you're in a constitutional crisis with two people arguing that they're in power. So, right now is it legal, and does it make sense to be doing this preemptive grab of Venezuela's assets?

We have assets that belong to the republic. I represent the republic and [am] working on that. And also we have public entities, which are under a legal structure that we need to comply with certain regulations in each country. And we need to do that. So, we are the new government. We need to take control of those assets, to preserve them for the reconstruction of Venezuela and to help the Venezuelan people, to stop our suffering.

Yeah, there is enormous suspicion of the corruption around Nicolás Maduro, especially among the military leaders. Juan Guaidó however has offered those leaders amnesty. Do they deserve amnesty?

That amnesty law does not include crime against humanity and people who have killed Venezuelans on the street in the recent protests and demonstrations. Okay? And we are just giving these to the officers who will help us to restore democracy. What we want is to push harder in order to facilitate a smooth transition in Venezuela.

Vecchio, you're also bringing your own sort of pressure by attending President Donald Trump's State of the Union address Tuesday, as a guest of Sen. Marco Rubio. What are you hoping to hear from Trump, in particular when it comes to the possibility of US military intervention? Are you hoping to hear Trump present that as a viable option?

For me, it's an honor being there. This is a recognition of the courage of our people who have been fighting in Venezuela to recover our democracy. And I'm expecting that he will ratify what he has said publicly. He stands with the Venezuelan people in order to recover our democracy. And this is not a fight between the United States and the Maduro regime. This is a fight between the free world and the dictatorship of Maduro, which is controlled by Cuba.

What about military intervention though? Because that has been raised as a possibility that the US might send troops. Would you want to hear that? Would that disappoint you or worry you?

We haven't discussed that. I hope we don't get to that point. I hope we can just resolve this peacefully.

There's also the Cuba-Venezuela connection I want to ask you about, Vecchio. National security adviser John Bolton, as you may know, has been especially vocal about this:

"The problem that makes it particularly acute in Venezuela is the control exercised by Cuban security forces," said Bolton. "You know, in many respects that actually intimidates the Venezuelan military. It's not an accident that around the hemisphere people now call the country 'Cuba-zuela' because the Cubans are so much a part of the Maduro regime."

Do you see the same connections?

Cuba is in Venezuela. Cuba is [making decisions about] Venezuela jointly with Maduro. And we need to liberate Venezuela — not only from the dictatorship of Maduro — but also from the Cuban regime.

I mean, no doubt that Cubans are in Venezuela supporting Maduro, but hasn't it been corruption and mismanagement at the center of Venezuela's crisis? Is pointing the finger at Cuba really missing the point?

I'm curious, Carlos Vecchio, do you have friends or relatives who support Maduro?

I had just a few. I used to have many family members, you know, close to the Chavisma, to put it in some way. But not anymore.

Just I want to keep their relationship with them. We don't discuss about politics. OK. And I think they realize that the situation cannot continue as it is in Venezuela. Twenty-three days before, nobody knew in our country, who was Guaidó. Now he's the most popular person in Venezuela.