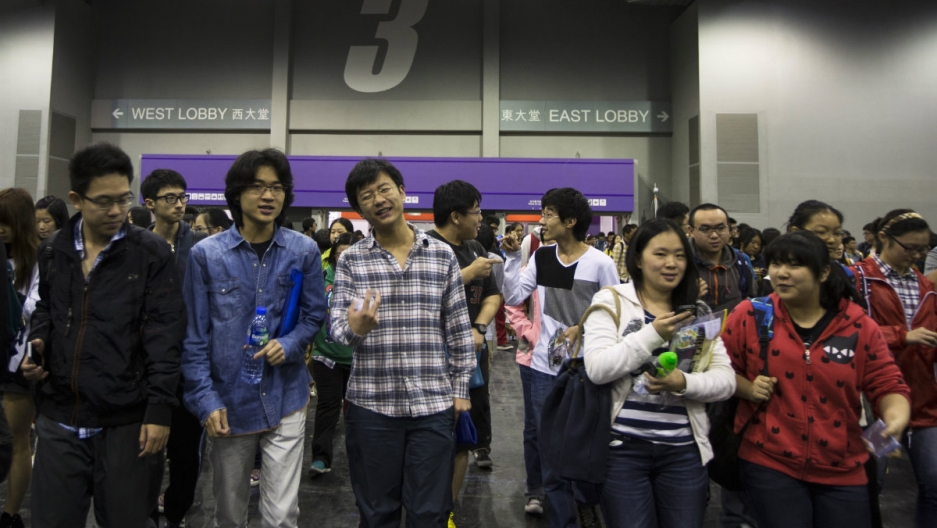 Students leave after a Scholastic Assessment Tests exam at AsiaWorld-Expo in Hong Kong Nov. 2, 2013. Chinese students form the largest overseas group at US universities. In recent years, the number of Chinese students coming to the US has stopped growing at the pace it was a decade ago.

For Chinese families, sending a student to the US to study is time-consuming and costly. Alexandra Shi didn’t want to go. Her mom made her. She thought it was the only way Shi would get a job.

Shi started at Boston University in 2012, studying broadcast journalism. She roomed with Chinese friends and adopted a Western name, like a lot of Chinese students. And she tried to make American friends.

“My accent was OK. My problem was that when Americans talk to me, within a couple minutes they would think that I would have no problem understanding anything that they would say,” she says.

In reality, she didn’t understand much. So the conversations didn’t last long. Shi stuck with her Chinese friends. And that didn’t help her English.

“Whether we want to admit it or not, a lot of us definitely have problems — especially with a large number of us — with ... keeping it up academically because of the language barrier,” she says.

Some people may feel like Chinese students “throw their weight around” because they’re the biggest international group on many campuses, says Linda Lim, a University of Michigan international business professor.

“When you're in a very large minority you tend to cluster among yourselves, and that creates certain dynamics that people elsewhere on campus might react to,” she says.

And some Chinese students are very wealthy.

“Rich kids of any nationality — including, first of all, Americans — throw their weight around,” she says. “A lot of Westerners might have had a very recent view of China being a poor country. And therefore it's kind of jarring to them to see Chinese whom they think are or should be poor being richer than them.”

Late last month, a Duke University graduate program director sent a memo to Chinese students, urging them to speak English “100 percent of the time.” After an outcry, Duke administrators apologized, and the program director stepped down. The Chinese foreign ministry spokesman commented that the memo might not have been appropriate.

If the US gets a reputation for being unwelcoming of Chinese speakers because of incidents like the one at Duke, it could be a big problem for American higher education institutions. US colleges and universities are in a global race with Western Europe and other countries to recruit Chinese students.

“Many schools, my own included, have developed sophisticated administrators who go actively to these countries, to China, to spread the word about our institutions and try to get high paying but also qualified students to apply to our schools,” says Susan Blum, an anthropology professor at the University of Notre Dame.

An estimated one-third of international students in the US are Chinese. Many pay full tuition, providing a financial lifeline for some colleges and universities.

“I think there’s recognition if the universities are not hospitable to these students, the students will go elsewhere,” Blum says.

Americans already have a bad reputation when it comes to tolerating languages other than English, she says.

“The US tends to celebrate monolingualism,” Blum says.

In mid-19th century, for example, many American leaders expressed concern that German immigrants and their children weren’t speaking English. There were similar concerns about Italians in the early 20th century and Spanish speakers in recent decades.

More: Fewer international students coming to US for grad school in science and engineering

So far, life for Chinese students on American campuses hasn’t changed, says Shihao Han, 26, a graduate student in the University of Washington political science department. But he’s seeing more negative comments online. And, in 2017, Chinese students at Columbia University had name tags with their Chinese-written names ripped off their doors.

“So there is this kind of perception of the United States not being as friendly as before when it comes to Chinese students,” Han says. “But so far the trend in China— of getting an education abroad — United States is still the number one destination.”

The number of Chinese students coming to the US has stopped growing at the pace of a few years ago, but there are many possible reasons why. It’s harder to get a visa to the US, and new Chinese policies encourage students to stay in China. Also, parents may not have as much to spend. The Chinese economy is slowing.

Boston University journalism student Alexandra Shi’s back in Beijing now. More Chinese students are returning after studying in the US.

“Once you’re overseas you look at your country differently,” she says. “And I love that there are more people coming back to China.”

She thinks they’re changing the way business works there, hiring people more on merit than because of connections or gifts. But if the economy doesn’t improve, she’s worried Chinese students who studied abroad will again look outside the country for a job. She’s thinking about it herself.

“If this keeps going, if this keeps getting worse, I would probably think about having a backup plan, as much as I would love to stay here and keep my life here,” Shi says.

She hopes she’ll have options others don’t — because she studied in the US.