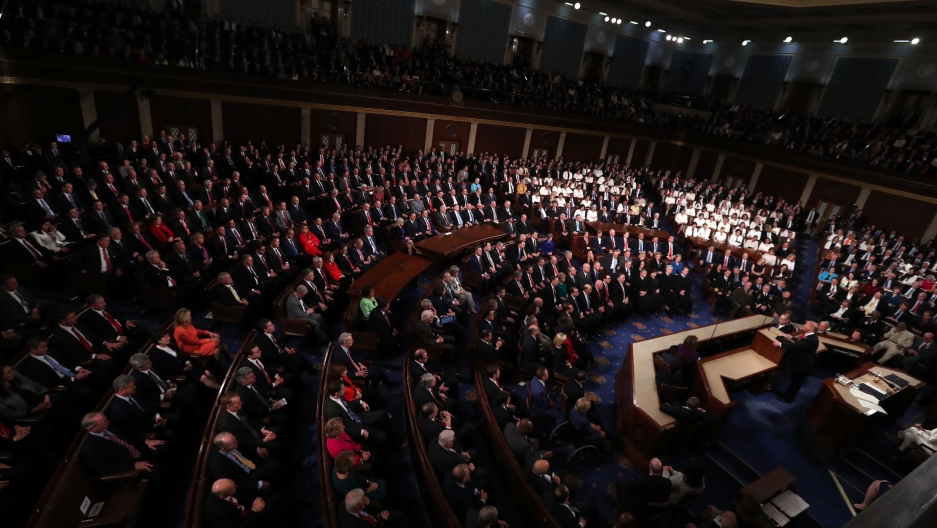 US President Donald Trump delivers his second State of the Union address to a joint session of Congress at the US Capitol in Washington, on Feb. 5, 2019.

President Donald Trump vowed in his State of the Union speech on Tuesday to build a border wall that is a source of a deep partisan divide and said Democratic attempts at "ridiculous partisan investigations" could damage US prosperity.

Trump spoke in the chamber of the House of Representatives facing political discord over his demands that Democrats end their opposition to funding for a border wall he says is needed to stem illegal immigration and smuggled drugs.

He called illegal immigration "an urgent national crisis," but stopped short of declaring a border emergency that would allow him to bypass Congress for wall funding. Instead, he urged Democrats and Republicans to find a compromise by a Feb. 15 deadline.

Related: Washington just spent a month in gridlock over the wall. Will Trump's State of the Union speech change anything?

"In the past, most of the people in this room voted for a wall, but the proper wall never got built. I will get it built," Trump said in the highly anticipated speech before a joint session of the US Congress, with his main Democratic adversary, new House of Representatives Speaker Nancy Pelosi, watching over his shoulder.

Democrats call the wall a waste of money and ineffective.

At the same time, Trump warned that Democratic efforts to investigate his administration, along with the possibility of US involvement in wars abroad, would endanger the US economy.

"An economic miracle is taking place in the United States and the only thing that can stop it are foolish wars, politics, or ridiculous partisan investigations," he said.

His remarks came as Democrats who now control the House planned a series of probes into the Trump administration and a special prosecutor investigates Russian meddling into the 2016 presidential election and possible collusion between the Trump campaign and Moscow. Russia denies meddling and Trump has said there was no collusion.

Related: Trump gave his first State of the Union a year ago. Where is US foreign policy today?

Apart from lauding economic accomplishments - unemployment near a five-decade low and manufacturing job growth among them — Trump's speech was light on new initiatives to further stoke growth in an economy seen as losing momentum as it began 2019. A Reuters poll last month forecast economic growth would slow to 2.1 percent this year after likely averaging around 3 percent in 2018.

Pelosi, who wore white like many Democratic lawmakers to celebrate the 100th anniversary of American women gaining the right to vote, applauded half-heartedly at times and frequently sat stony-faced through Trump's address.

She has shown no sign of budging from her opposition to Trump's wall-funding demand. That has led Trump to contemplate declaring a national emergency, which he says would let him reallocate funding from elsewhere without congressional action.

Some of Trump's fellow conservatives have urged him not to declare an emergency. Such a move would "upend" the balance of powers between the White House and Congress, Republican Senator Susan Collins told reporters on Tuesday.

Trump used part of his speech to offer a spirit of compromise, particularly in areas such as lowering the price of prescription drugs and funding a $1 trillion upgrade in US roads, bridges and other infrastructure.

But whether Trump and his opponents would follow through was far from clear, with both sides entrenched in long-held positions and girding for 2020 elections, reluctant to give the other side a political victory.

The Republican president appeared in the House chamber just weeks after his demand for $5.7 billion in funding for a US-Mexico border wall triggered a historic 35-day partial government shutdown that more than half of Americans blamed him for, according to Reuters/Ipsos polling.

The nationally televised address gave Trump his biggest opportunity to date to explain why he believes a barrier is needed on the US southern border with Mexico. The speech was delayed for a week because of the shutdown, which ended on Jan. 25.

"Simply put, walls work and walls save lives. So let's work together, compromise, and reach a deal that will truly make America safe," Trump said.

Trump also called attention to his efforts to rewrite trade deals with China and other nations to make the terms more favorable to the United States.

As his economic advisers work to complete a trade deal with China, Trump said any agreement "must include real, structural change to end unfair trade practices, reduce our chronic trade deficit, and protect American jobs."

He also called out Iran for threats against Israel.

"We will not avert our eyes from a regime that chants Death to America and threatens genocide against the Jewish people," he will say.

Trump also addressed foreign policy, including support for an effort to coax Venezuelan President Nicolas Maduro into leaving power and declaring the Islamic State militant group all but defeated.