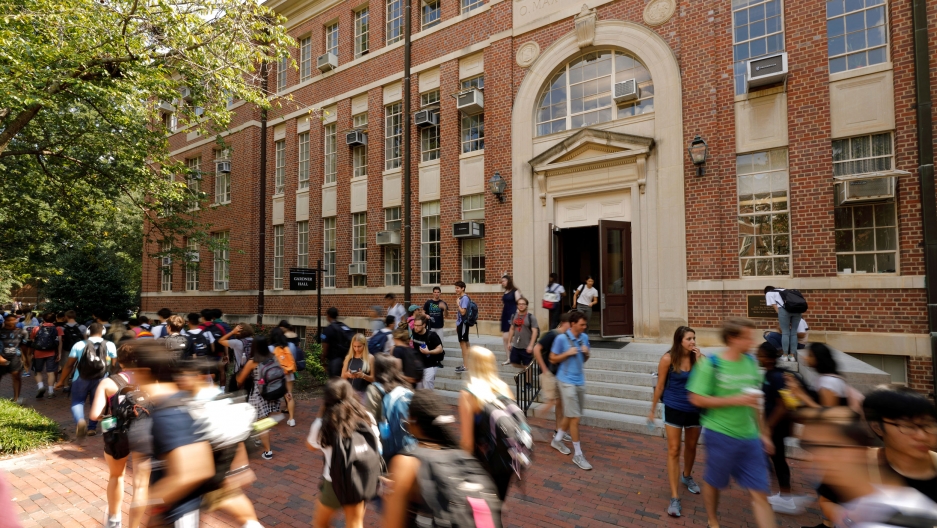 Students walk past a classroom building on the campus of the University of North Carolina at Chapel Hill, North Carolina, in September 2018.

Not that long ago, a high school diploma was enough to land you a job as a secretary or an administrative assistant, but that’s not the case anymore.

According to a 2014 report from the labor market research firm Burning Glass, 34 percent of job postings for secretaries and administrative assistants requested a college degree.

“You need to give more education now to get the same job that your parents or grandparents could have gotten with a lot less,” said Bryan Caplan, an economics professor at George Mason University, and author of “The Case against Education: Why the Education System Is a Waste of Time and Money.”

Caplan argues that college degree requirements make it harder for many to enter the workforce. He is also concerned that college doesn’t provide students with useful technical skills.

“Really most of what education is, is a passport to the world of real training. So you go and spend all these years studying stuff that you don’t need to know,” says Caplan. “And that lets you go get a job that’ll teach you how to do the job.”

Yet many education leaders, including Rhett Allain, an associate professor of physics at Southeastern Louisiana University, believe college education isn’t all about preparing students for a job.

“A college education is not about job training,” Allain wrote in WIRED. “You can become a better human with an art history major. After that, you don't absolutely have to do something in art. In fact, many art history majors go on to do other things.”

But Caplan believes the primary responsibility of college is to make students job-ready. He also argues that much of what students learn — including history, literature, and foreign languages — is soon forgotten.

“Right now, people spend many years allegedly studying this stuff. And yet when you test adults, they know next to nothing,” said Caplan. “They just forgot it after the test. ... People forget what they do without practice.”

If education is a waste of time and money, as Caplan argues, what about the fact that people who finish college by his own account, “earn, on average, 73 percent more than those who have only a high-school diploma”?

Caplan says earning more money doesn't mean that you have great job skills. “It could also cause you to make more money because you're impressing employers with your credentials,” he said.

He notes that we often get degrees confused with skills — just because you have a degree doesn’t mean you’re necessarily smarter or more prepared for a given job.

Caplan has a couple of solutions that he thinks will improve our current education system. The first is to cut public funding for higher education.

“We're spending way too much on this,” said Caplan, noting that he’s not worried that cutting funding would result in a widening education gap that disadvantages low-income students.

“Look around, we're in a class society. I mean, it's really a question of what is the most sensible way to go and spend taxpayer resources,” said Caplan.

“How about we go and explore 20 realistic options for two weeks each, when you're 12 years old? And then start trying to narrow it down,” said Caplan.

“It would make more sense to prepare people for jobs that they are likely to have,” he added.