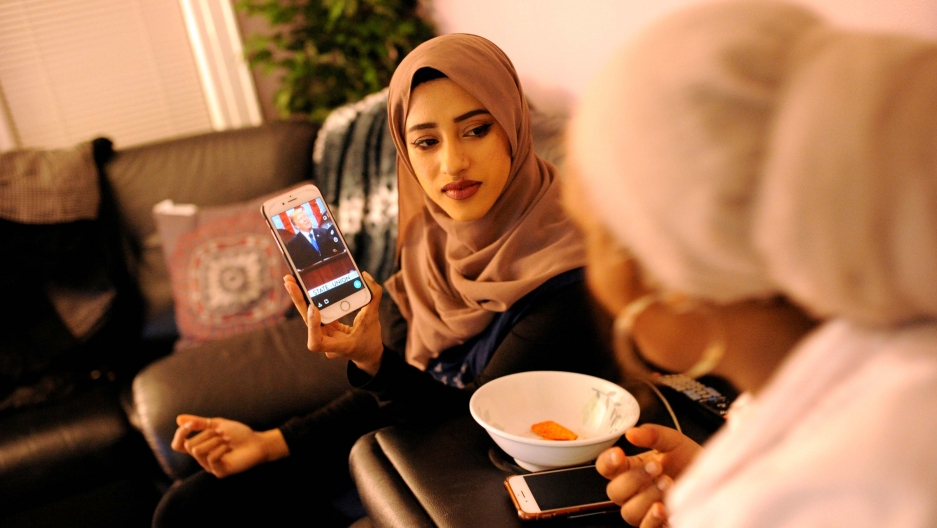 Tasnim Bushra, left, and Lina Mohammed watch US President Donald Trump's 2018 State of the Union address in the Brooklyn borough of New York City, Jan. 30, 2018. Bushra's parents are from Bangladesh and Mohammed's parents are from Ethiopia.

President Donald Trump is expected to highlight his immigration agenda Tuesday in his second State of the Union address to Congress. But after months of acrimonious debate, it’s unclear whether his speech can actually translate into bipartisan action on an issue that has come to define his presidency.

In last year’s address, Trump outlined his own four-pillar plan for comprehensive immigration reform. It included a path to citizenship for some 1.8 million unauthorized immigrants who came to the United States as children — about 700,000 of whom benefit from temporary legal status under the Deferred Action for Childhood Arrivals program — in exchange for measures that would tighten both legal and illegal immigration: a southern border wall, ending the “diversity lottery” visa program and reallocating slots on the basis of “merit,” and limiting the categories of family members immigrants may sponsor to the US, which the Trump administration calls “chain migration.”

“These four pillars represent a down-the-middle compromise, and one that will create a safe, modern, and lawful immigration system,” he said. “... So let’s come together, set politics aside, and finally get the job done.”

Though unpopular among Democrats and immigration advocates, it was a framework many members of Congress thought they could work with — especially since it came from the president himself.

But a year later, the gridlock has only gotten worse.

“Things have deteriorated,” said Theresa Cardinal Brown, director of immigration policy at the Bipartisan Policy Center in Washington, DC. “There was a point … where Democrats thought they could work with him. And now we hear very clearly that they don't think he's a reliable partner in negotiations.”

Since then, the president has focused almost solely on the wall, leading to an intense standoff that prompted a 35-day partial government shutdown over his insistence over $5.7 billion in wall funding that ended Jan. 25. He stormed out of an Oval Office meeting with congressional Democratic leaders last month, calling shutdown talks a “total waste of time.” He has tweeted often about Central American migrant “caravans,” characterizing them as full of criminal invaders who can only be kept out by a wall.

Related: Trump signed an order for the wall 2 years ago. The US just ended the longest shutdown ever over it.

The other three pillars from last year’s proposal seem to have fallen by the wayside. The president has been unwilling to compromise on immigration even as the Feb. 15 deadline approaches to reach a deal on border security and avoid another shutdown. On Friday, he hinted he might declare a national emergency in his State of the Union that would allow him to act unilaterally in building his wall.

With Caravans marching through Mexico and toward our Country, Republicans must be prepared to do whatever is necessary for STRONG Border Security. Dems do nothing. If there is no Wall, there is no Security. Human Trafficking, Drugs and Criminals of all dimensions - KEEP OUT!

Last year, the House and Senate rejected a handful of immigration bills, some which included Trump’s four pillars and others that covered just part of what he outlined in last year's State of the Union. Tying the fate of “Dreamers” to funding for the wall — for which Trump has requested $25 billion over 10 years — was a major point of contention. Trump’s deal-making style, in which everything appears to be a zero-sum game, has been a roadblock for passing legislation.

“The bills failed in the House and Senate because the things that could get the most support were overtaken for other things the president demanded that didn’t have as much support,” Brown said.

And though it’s certainly been an eventful year for US immigration policy, most of what has changed has come via executive action by the president himself or policy guidances from the Departments of Justice or Homeland Security, rather than Congress.

“They’ve done zero,” said Leon Fresco, an immigration lawyer and former deputy assistant to the Attorney General in the Justice Department’s Office of Immigration Litigation under former President Barack Obama. “There have been no changes that have have been made to immigration law. They’ve made tweaks to make it more difficult for people to access the system, but it’s come in dribs and drabs. It’s gotten slower and more onerous.”

Several people scheduled to be in the State of the Union audience Tuesday are immigrants affected by recent policy changes and Trump’s anti-immigrant rhetoric.

Among the guests will be Victorina Morales, an undocumented Guatemalan immigrant who worked for years as a housekeeper at one of Trump’s golf clubs in New Jersey and told her story to The New York Times in December. She is attending as a guest of Rep. Bonnie Watson-Coleman, a Democrat from New Jersey.

“I hope that in his State of the Union address, Donald Trump will finally acknowledge the real face of immigrants in this country — women and children fleeing violence, law-abiding, tax-paying people who would do almost anything to be Americans,” Watson-Coleman said in a statement. “And if he can’t, I’ve invited Victorina so that he may look her in her eyes to tell his lies to a familiar face.”

Morales will join Jin Park, the first Deferred Action for Childhood Arrivals recipient to be awarded a prestigious Rhodes scholarship, attending as a guest of New York Democrat Rep. Grace Meng; Albertina Contreras Teletor and her daughter Yakelin Garcia, who were separated from each other at the southern border last year and will attend as guests of Democratic Sen. Jeff Merkley from Oregon; and Linda Clark, a Liberian immigrant who faces possible deportation because the Trump administration has ended the Deferred Enforced Departure program for Liberian Americans. Clark will attend with freshman Rep. Ilhan Omar, a Democrat from Minnesota.

Morales’ lawyer, Anibal Romero, told The World his client is attending Trump’s address on behalf of other undocumented immigrants in the US.

“She wants to tell the world this immigration debate is really silly,” he said. “There are millions of undocumented people in this country in that have done nothing but work hard. Border security is a concern, but what about the people who are already here? Especially the people who are working for the president?”

Next: Trump gave his first State of the Union a year ago. Where is US foreign policy today?