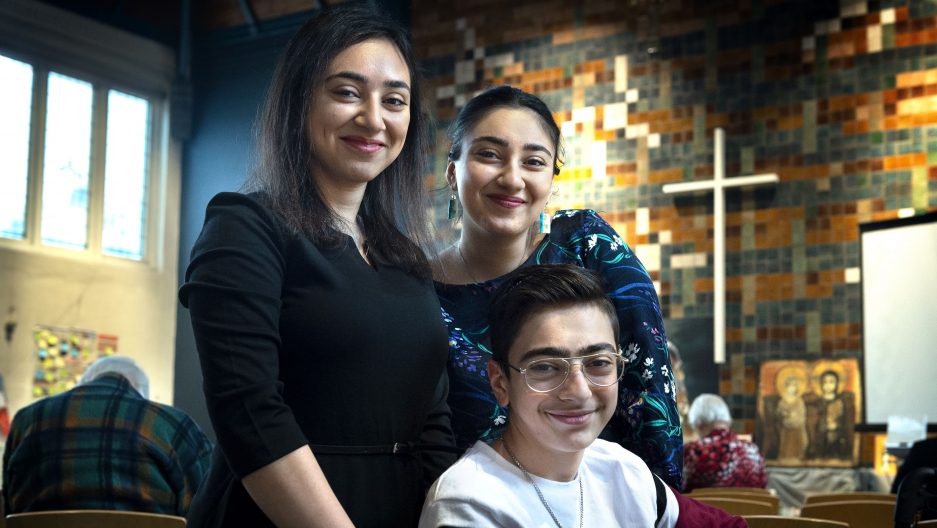 Hayarpi, left, Warduhi, middle, and Seyran Tamrazyan may leave Bethel Chapel in The Hague after three months, now that four governing parties have agreed to review hundreds of asylum cases involving children who grew up in the Netherlands.

After 96 consecutive days, a Dutch church has ended a round-the-clock liturgy it held to protect an Armenian family from deportation after receiving confirmation that the government would not deport them.

The Tamrazyans, a family of five whose asylum claim had previously been denied, were spared deportation after the four government coalition parties on Tuesday agreed to review several hundred asylum cases involving children who’d spent most of their lives in the Netherlands or were born there. More than 600 children facing deportation will likely now be allowed to remain, Dutch media reported.

The Tamrazyan family — which includes two daughters, Haryarpi, 21, Warduhi, 19, and a son, Seyran, 15 — has been residing in the Netherlands for nine years. Their father fled Armenia for political reasons and brought his family with him. Their asylum case dragged on for six years, during which Dutch courts twice ruled in their favor, but the government won its third attempt to get an order for their deportation.

Until this week, they’ve not left the grounds of Bethel Chapel. The Protestant church in The Hague agreed to organize a 24/7 service to protect them, citing an obscure Dutch law that forbids immigration authorities from entering a church to make an arrest while a service is underway. A rotating cast of nearly 1,000 pastors from across Europe — and at least one from the United States — volunteered to take shifts since it began Oct. 26. Their effort gained international media attention, pressuring the Dutch government to negotiate a so-called “children’s pardon.”

The three-month church service ended in a small ceremony Wednesday. At a news conference afterward, Haryarpi Tamrazyan thanked the volunteers and said the deal would “allow me to continue with my life.”

Though deportation is no longer imminent, the family has not officially been granted permission to stay in the Netherlands.

"[Governing parties] have reached an agreement, and that agreement says, 'We are going to re-evaluate the dossiers,’” she told the media. “Therefore, we don't know officially that we may stay because that dossier still has to be judged.”

See our previous reporting: A tale of two sanctuary churches: Congregants in Ohio and the Netherlands find ‘instant connection’