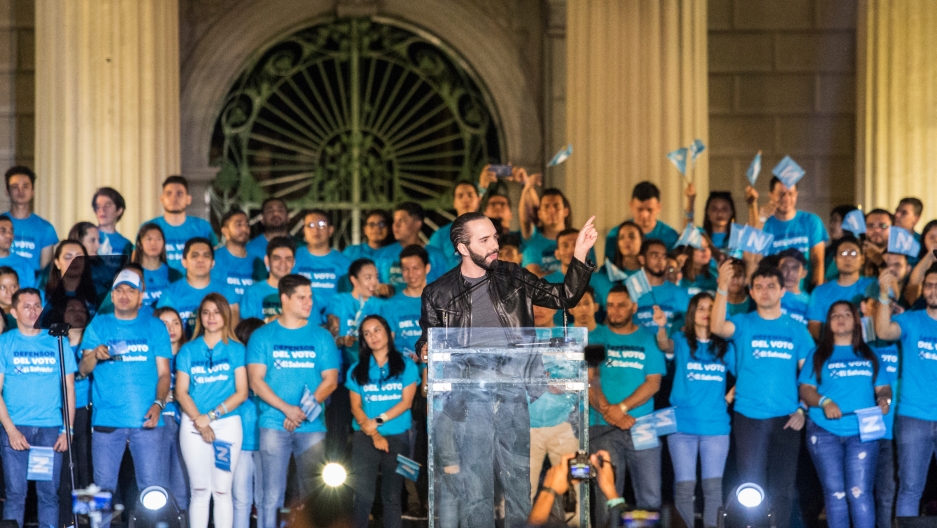 Nayib Bukele, El Salavador's young presidential hopeful, doesn't do debates or interviews, but he's all over social media, and youth love him, as well as others Salvadorans seeking radical change.

Editor's note: On Sunday, Feb. 4, Nayib Bukele, 37, swept to victory in El Salvador's presidential election, bringing an end to a two-party system that has held sway over the country for three decades. Bukele won more votes than all other candidates combined in his first-round sweep, highlighting deep voter frustration over the failure of the two main parties to tackle violence and corruption. Contending parties have conceded and Bukele is set to take office in June with his anti-corruption platform.

Rap music blared at a campaign rally in San Salvador on Jan. 26, as Nayib Bukele, the frontrunner for this weekend’s presidential elections, took the stage. Around 100 young people stood behind him, reaffirming his image as the candidate for El Salvador’s youth.

He greeted the cheering crowd wearing his trademark leather jacket and jeans.

Bukele, a 37-year-old populist and social media star, has catapulted to the top of the polls with a simple message: he won’t steal.

That might seem like a low bar for the presidency. But it speaks volumes to voters in a country where political corruption is rampant, and three of the last four presidents have been accused of embezzling hundreds of millions of dollars.

The scion of a prominent business family, Bukele started his political career in 2012 as mayor of Nuevo-Cuscatlán, a small town outside San Salvador. Three years later, he became mayor of San Salvador, where his crowning achievement was rehabilitating the historic town square, previously overrun by warring gangs.

During the presidential campaign, Bukele has championed his image as an outsider fighting a corrupt political establishment. Critics describe him as a master brander with little substance.

“If we want to change the past, we need to not only to win on Feb. 3 but to crush the other two parties,” Bukele told supporters in October 2018 in a Facebook Live video, referring to the business tycoon and former foreign minister running with the country’s two dominant political parties.

In a country with just 6.4 million people, Bukele has more than 1.4 million followers on Facebook and 500,000 on Twitter. Social media is his primary mode of communication with voters — he grants few interviews to the media and has been a no-show at presidential debates.

El Salvador has wrestled with an explosion in gang violence in recent years that has sent thousands of people north to the United States seeking asylum. According to The World Bank, 31 percent of the population lives in poverty (that’s a decline from 39 percent in 2007). 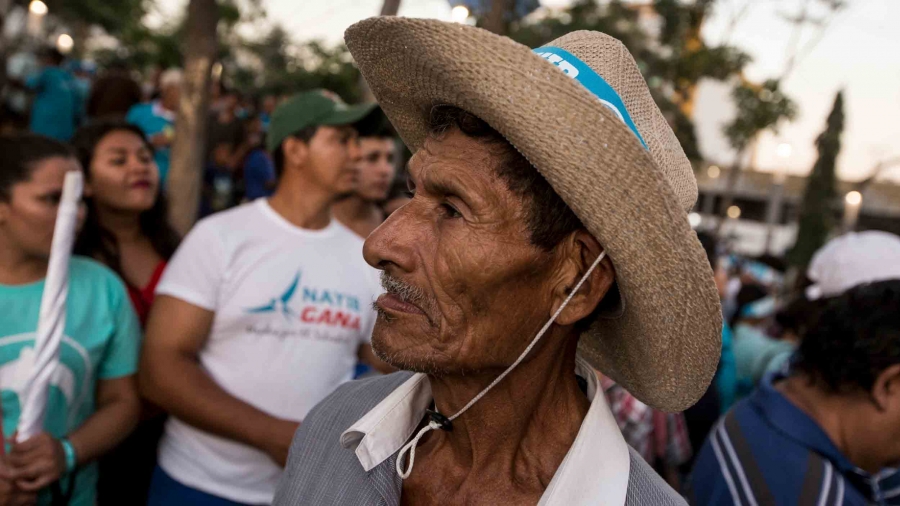 A Nayib Bukele supporter during the closing event of the Bukele's campaign, in downtown San Salvador on Jan. 26, 2019.

But the election has focused astonishingly little on the issues, aside from generic promises from the candidates to bring down violence and create more jobs. And the issue of migration — a topic that became top of mind in the US because of the migrant caravans leaving from El Salvador and neighboring Honduras — has been absent from political dialogue in El Salvador, where migration is a fact of life and an economic necessity. Remittances, mostly from the US, make up about 17 percent of El Salvador’s economy.

Related: The kids aren't alright — when being young is a crime in El Salvador

Instead, the election has largely been a referendum on the country’s two dominant political parties and its past presidents.

Bukele now looks likely to upend El Salvador’s two-party rule. On the right is the National Republic Alliance, known as ARENA. On the left is FMLN, the party of El Salvador’s former guerillas. They have won every presidential election since the 1992 peace accords ending the country’s civil war.

Bukele was part of the FMLN until 2017 when the leftist party expelled him — for reasons which are disputed. He tried to organize his own party but couldn’t get it officially recognized in time for the election. Now, Bukele is running under GANA, a small political party associated with the extreme right. While Bukele has tried to distance himself from GANA — making it clear he is running under the party because he had no other options — the whiplash has some Salvadorans questioning where he stands. 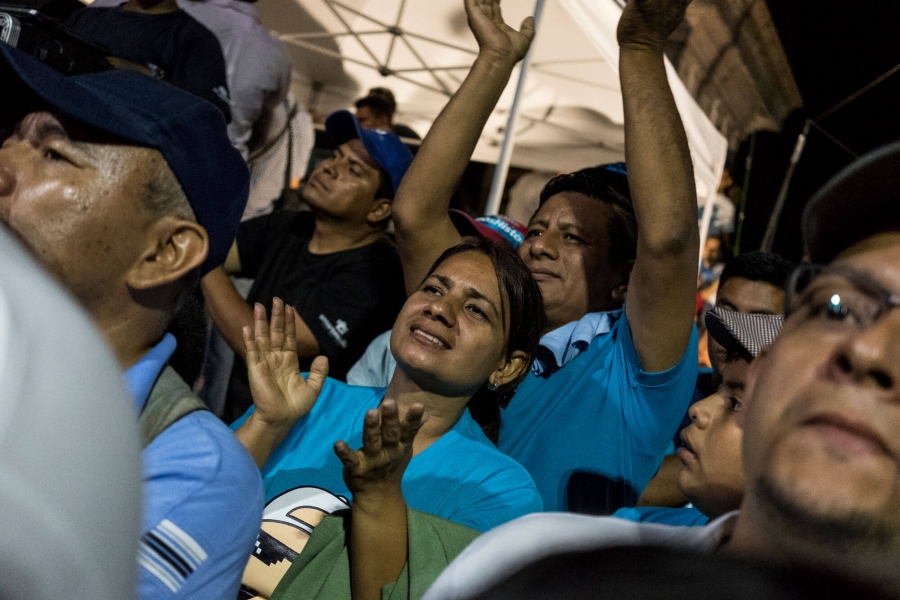 Nayib Bukele supporters standing in the audience during the closing event of a campaign stop in downtown of San Salvador, El Salvador.

“Bukele isn’t proposing any radical policy changes. What he's created is an illusion of hope. That things can be different."

“Bukele isn’t proposing any radical policy changes. What he's created is an illusion of hope, that things can be different,” Artiga said.

And voters in El Salvador want an end to the corruption, which has stained both FMLN and ARENA.

Former FMLN President Mauricio Funes, who ruled from 2009 to 2014, is accused of embezzling $351 million in public funds. He fled to Nicaragua in 2016. Former ARENA President Antonio Saca, who oversaw the country from 2004 to 2009, is in prison for embezzling $300 million. And Francisco Flores, who led from 1999 to 2004 under ARENA, was accused of diverting more than $15 million in government funds for his party and his personal use. He died before trial.

Those scandals — among others — have voters from both parties flocking to Bukele. (GANA has also been tied to corruption, but Bukele has distanced himself from the party and rarely invokes its name.)

“The FMLN betrayed us. And I would never vote for ARENA. For the first time, there is another option,” said Dilma Martinez, 50, who crowded into the historic square last Sunday for Bukele’s final rally on Jan. 26, which drew about 3,000 people.

Susana Ulloa of San Salvador came to the rally with her 16-year-old daughter.

“I can’t say that Bukele is a messiah or a god,” said Ulloa, who works for the government. “But I prefer to try someone new than go back to the old that I know.”

Her daughter said she supports Bukele because he made the historic center a place where young people could hang out. Places like La Dalia, a historic bar with tall ceilings, pool tables and cheap beer.

“I can’t say that Bukele is a messiah or a god ... But I prefer to try someone new than go back to the old that I know.”

A few years ago, most Salvadorans wouldn’t dare come here because it was too dangerous. When Bukele came into power, he negotiated with the gangs and got them to back off, said Arysbell Arismendy, a reporter with the Salvadoran publication El Faro, who is covering his campaign.

“His message has basically been ‘I am not corrupt. You can see it. I can rehabilitate this public space for the people, something none of us has had before.’”

And he has offered only vague plans on how to address El Salvador’s most pressing domestic issues, Arismendy said.

“We have not seen to date a clear proposal for addressing the security situation, nor how [Bukele] will work to stem the wave of Salvadorans leaving the country every day.”

“We have not seen to date a clear proposal for addressing the security situation, nor how he will work to stem the wave of Salvadorans leaving the country every day.”

Johnny Wright, a former congressman with ARENA, said Bukele has been masterful at turning criticism to his benefit by claiming the political establishment wants to bring him down.

Related: A brother and sister flee gang violence in El Salvador and start over in the US

“His proposals, his plans have very little substance behind it,” Wright said. “He can say anything and get away with it. But there is this mystical aura around this personality which is an enigma.”

But an enigma may be preferable to the status quo for a majority of Salvadorans. Bukele is hoping to win the presidency outright on Sunday. If no candidate wins a majority, there will be a runoff in March. 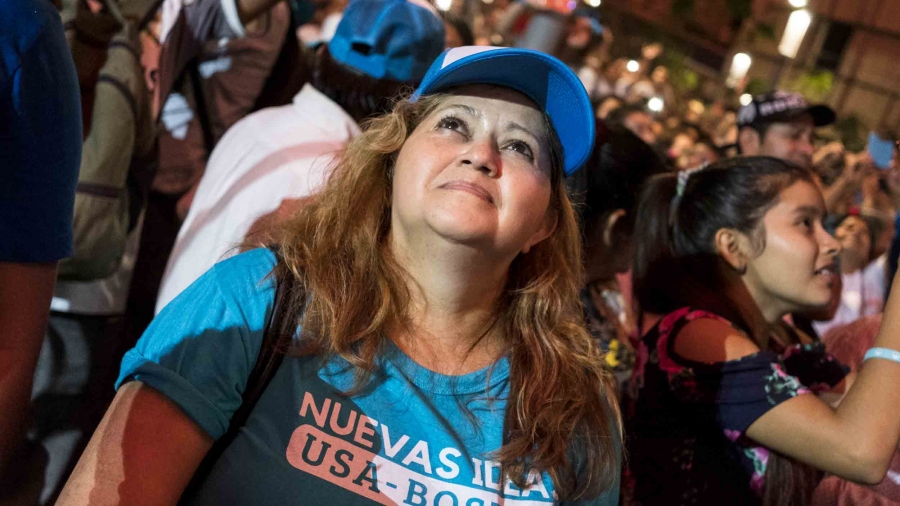 Maria Espinal during the closing event of the Bukele's campaign, in the downtown of San Salvador on Jan. 26, 2019. Espinal is a Nayib Bukele supporter who lives in United States.

Maria Espinal, who fled from El Salvador to the United States in 1984 in the midst of its civil war, flew home to cast her vote for Bukele this weekend.

“If there had been work and security, I wouldn’t have left,” said Espinal, who owns a cleaning business. “And the same is happening now. There isn’t a war, but there is insecurity.”

But Espinal thinks Bukele could change that.

“I think he’s an honest person,” said Espinal. “And when I retire, I want to return to a country that is safe and better off.”