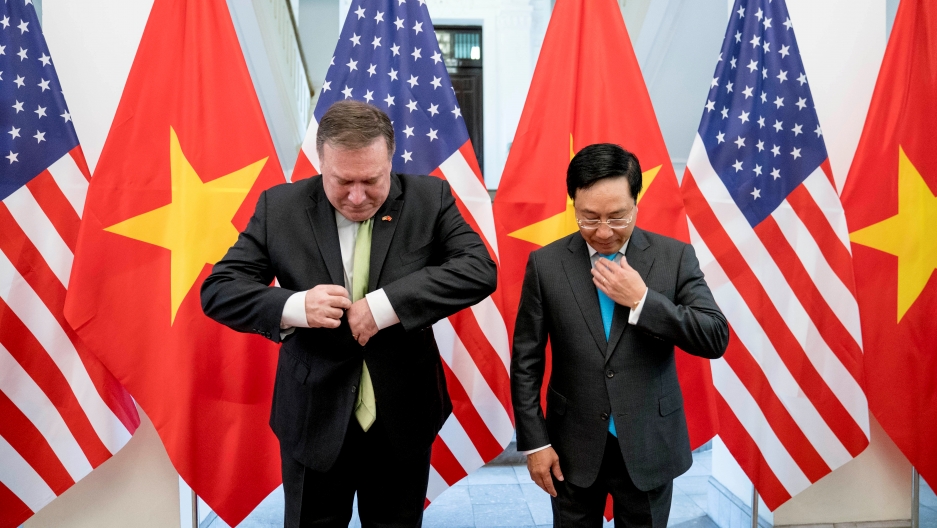 US Secretary of State Mike Pompeo and Vietnamese Deputy Prime Minister and Foreign Minister Pham Binh Minh arrive for a photo opportunity before a meeting at the Ministry of Foreign Affairs in Hanoi, Vietnam, July 9, 2018.

US President Donald Trump says he looks forward to getting together with North Korea’s dictator Kim Jong-un for a second face-to-face meeting in late February.

The venue for Trump-Kim Summit No. 2 has not been announced officially. Some of the options reportedly discussed include Hawaii, Mongolia, Indonesia.

But Vietnam is said to be at the top of the list. And that makes sense for a whole bunch of reasons.

Why Vietnam? From the Trump administration’s perspective, Vietnam is a shining example of what North Korea’s future could look like.

“We know it’s a real possibility,” Mike Pompeo said during a speech in Hanoi, Vietnam, last July. “We see how Vietnam has traveled this remarkable path.”

The path that the US Secretary of State was pointing to is Vietnam’s post-war economic success, which Pompeo referred to as a “miracle.”

The turning point for Vietnam, Pompeo suggested, came just 20 years after the fall of Saigon. In 1995, the US and the Socialist Republic of Vietnam re-established diplomatic relations.

Standing in the Vietnamese capital, Pompeo had this message for the dictator back in North Korea: “President Trump believes your country can replicate this path. It’s yours if you’ll see the moment. The miracle can be yours. It can be your miracle for North Korea as well,” he said.

So, from Washington’s perspective, there is powerful symbolism in choosing Vietnam for Trump’s second summit with Kim.

“We have gone from enemy to partner, and the US-Vietnamese relationship is growing by leaps and bounds,” says Zachary Abuza of the National War College in Washington. “We have seen a surge in US investment in the country. They’ve increased their military relationship with the United States. We had the first port visit last year of a US aircraft carrier.”

Vietnam was enthusiastic about joining the Trans-Pacific Partnership, hammered out during President Barack Obama’s time in office. When Trump pulled the US out of the trade deal, the Vietnamese saw it as a setback, Abuza says.

“From their perspective, it’s been very important to keep the United States engaged in regional security and they understand that Trump is a transactional president. The ability to host a major summit is something that really matters to the president, and it’s something that they have to offer,” Abuza says.

Vietnam as a summit venue would work well for North Korea too, starting with a very practical reason.

“It’s ironic that North Korea has the capability to shoot an intercontinental ballistic missile that can reach Washington, DC. But it doesn’t have the technology to build a passenger airplane that can travel more than about 4,000 kilometers,” says Sung-Yoon Lee of the Fletcher School of Law and Diplomacy at Tufts University.

Flying in a North Korean plane is thought to be non-negotiable for Kim’s second meeting with Trump. So, the location would have to be in range of North Korea’s capital, Pyongyang.

That detail reportedly ruled out Switzerland as a possible summit location, where Kim went to boarding school in the late 1990s, because that would have required him to hitch a ride in a Chinese plane.

The Socialist Republic of Vietnam, the country’s official name, is not just closer geographically to North Korea. Lee says the national narratives of the two communist governments also resonate. After all, Vietnam fought a war against the American imperialists, and won.

“Vietnam has been a shining model of communist-led unification for the North Korean regime for decades,” Lee says.

It was communist North Vietnam that defeated the US and its allies in the south, Lee says, and then effectively took control over the entire country on its own terms.

But what about the economic “miracle” that Pompeo was dangling for Kim, the booming trade that Vietnam has built up with the US, with South Korea, its neighbors and the European Union? Isn’t that path enticing for Kim?

Not if the Trump administration insists that he gives up his nuclear weapons first, Lee says.

“The longer this negotiation process goes on, the more time and money Kim Jong-un will be able to buy what he really seeks, which is to further advance his lethal nuclear and ballistic missile capabilities," Lee says.

The US intelligence community seems to agree with that assessment. On Tuesday, the Director of National Intelligence, Dan Coats delivered a report to Congress saying this about North Korea.

"We currently assess that North Korea will seek to retain its WMD [weapons of mass destruction] capabilities and is unlikely to completely give up its nuclear weapons and production capability because its leaders ultimately view nuclear weapons as critical to regime survival," Coats said.

Of course, denuclearization was the primary objective of President Trump’s first summit with Kim Jong-un. And it will be the aim of summit number two as well.

US special envoy for North Korea, Stephen Biegun is planning a speech at Stanford University on Thursday about the administration’s strategy. He will then travel to the DMZ, which divides North and South Korea, to talk about details of the next Trump-Kim summit.