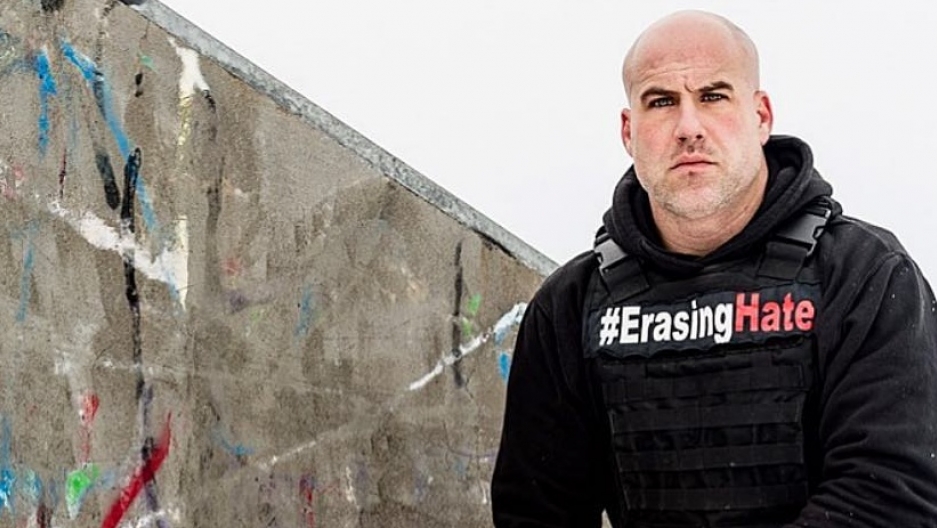 Montreal's Corey Fleischer poses in a photo from his Instagram account, where he posts videos of himself removing hate speech and graffiti. He's accumulated more than 55,000 followers.

Corey Fleischer is removing hate-filled graffiti across Montreal to the delight of tens of thousands of social media followers.

It all started about eight years ago, when Fleisher was driving his truck in Montreal on his way to work. As he stopped at a red light, he spotted a swastika spraypainted on a cinder block.  Fleischer, who worked at a graffiti removal company, had all the equipment necessary to remove it right then and there, but he kept on driving.

“I wish the story was that I hopped out of my truck with my power washer, and I removed my very first piece of hate, but that's not what happened,” Fleischer said.

As he drove away, he continued thinking about it, feeling guilty for not taking action. Fleischer went to his job, but a few hours later, he returned to the same traffic light and removed the swastika in a matter of seconds.

“I spent a lot of my life searching for completion," he said. "And [those] 15 seconds finally made me feel complete. And I didn't know how, but I knew that I needed that feeling again.”

Since then, Fleisher has been using a power washer and other tools to “stop the cycle of hate” by deleting graffiti with Islamophobic, anti-Semitic, homophobic and racist symbols and messages across public spaces in Montreal.

Fleischer has proven to be social media savvy, posting videos and photos of his work — and playing up his schtick. He talks like a sportscaster, wears army fatigue pants and a tactical vest and looks straight at the camera. At first glance, he might look like a tough guy, blasting graffiti off the walls and tossing the power washer to the ground afterward. 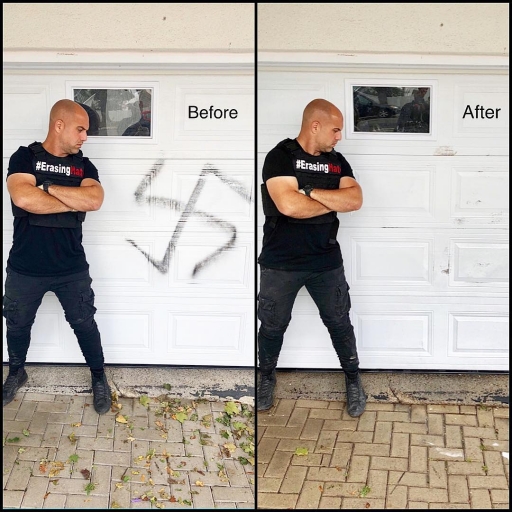 In a montage from a Sept. 24, 2018 social media post, Corey Fleischer poses with a before and after image of erased graffiti.

But he’s on a mission — he says his long-term goal is to create a movement powered by his social media presence, a way for people around the world to convey the location of hate graffiti, so it can be removed.

Last week, he saw an example of how his vision could be put into practice. A person in Australia alerted Fleischer to a swastika drawn on a bench. It took him 45 minutes to make sure that the hateful symbol was erased.

“I put down on my social media the location, the tools that they needed to erase a marker swastika that was on a bench and within 45 minutes, it was gone.”

Fleischer says seeing hate graffiti on a regular basis does not affect him personally, but rather, he feels a sense of empowerment knowing that nobody else has to see it after its removal.

“This is something that I am doing 24 hours a day, seven days a week. I tell everybody, ‘I eat hate for breakfast, I am eating hate for lunch, I am eating hate for dinner, and when I go to bed, I am dreaming about hate,’” Fleischer said. “Every second I spend not doing this, I feel like I am wasting my time.”