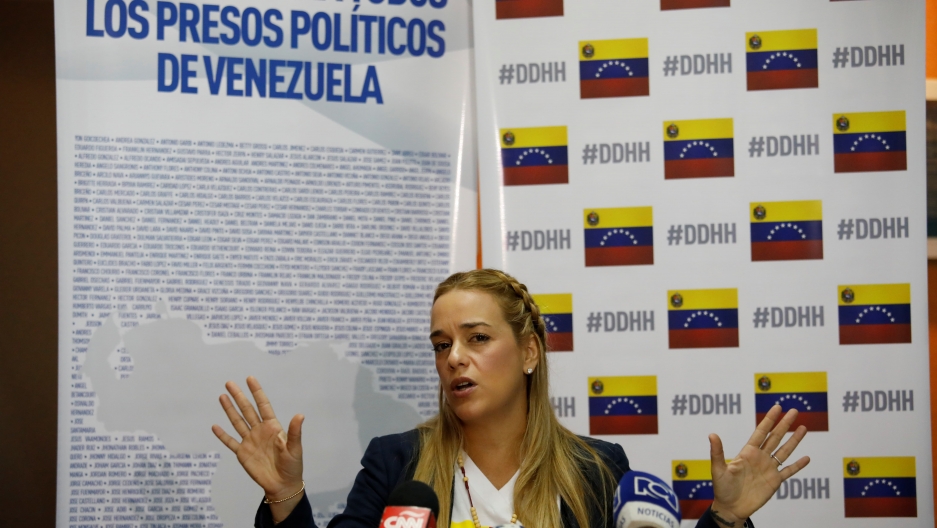 Lilian Tintori, wife of opposition leader Leopoldo Lopez, speaks during a meeting with foreign correspondents in Caracas, Venezuela, Aug. 29, 2017. The banner in the background reads "Freedom for all the political prisoners in Venezuela."

Opposition activist Lilian Tintori knows firsthand that Venezuelans who speak out against their government take a risk.

Her husband, Leopoldo López, the country's most prominent political prisoner is currently under house arrest, serving serving a 14-year sentence for "inciting violence" during mass protests back in 2014.

"All around my house we have the police — the police of Maduro, the police of the dictator. Every four hours they take a picture of my husband, Leopoldo López, with a newspaper in his hand like a kidnapping. He [Venezuelan President Nicholás Maduro] is crazy," Tintori told The World.

López is also a mentor to Juan Guaidó, the opposition leader who declared himself Venezuela's interim president last week.

Tintori says Guaidó has broad popular support and that his efforts against Maduro are gaining steam.

The World's Marco Werman sat down with Tintori to talk about the latest developments in Venezuela.

Lilian Tintori: That's not true. Maduro is alone. The only thing Maduro has is the arms — militaries and police with arms. And right now, he's ordering to kill people who protest. People are protesting in Venezuela because they don't have food, they don't have medicine, they don't have gas, water or light. And people want to a change, a political change, economic change.

Lilian Tintori your husband is under house arrest. He was sentenced to 13 years in prison. How is he still a part of the movement? Is he able to talk to people outside of his incarceration?

Yes. Well first, I want to be clear that Leopoldo never, never called for violence. We don't want violence. Leopoldo López was the first one to denounce Maduro, a dictatorship. And that's why Leopoldo López is in jail. Right now he is on house arrest. And here in our home, he made a plan for our country with a lot of very good people around the world to support and continue this transition that already started. We don't want confrontation. We want reconciliation. We want militaries and police put on the side of the constitution and put in order of President Juan Guaidó.

As your husband was in detention, you met with President Trump in 2017. What were your impressions of that meeting?

What were your impressions of President Donald Trump as a person?

But aren't you worried with the United States, with Canada, with the EU endorsing Juan Guaidó that that's going to hurt your movement because it's not Venezuelans voicing their concerns, it's outside voices.

No, no, no. It's our voices, it's our protest. We protested in the street in 2014. We protested in the street in 2017. We are brave here in Venezuela every day because Venezuelan people are at risk right now. It's our voice, it's our entire hope for the change. We thank you for the support [from] an international community. But it's here — inside. It's in Venezuela, it's our country. And we need to remember first: stop Maduro. Second: a government of transition and a free and fair election. That's our plan. That's what we're working all together. All the opposition together — opposition inside Venezuela, opposition outside Venezuela. Because we want to remember that we have political prisoners but we have a lot of exiled, political in exile. And there, everyone is working for peace, for democracy and for a change in Venezuela.