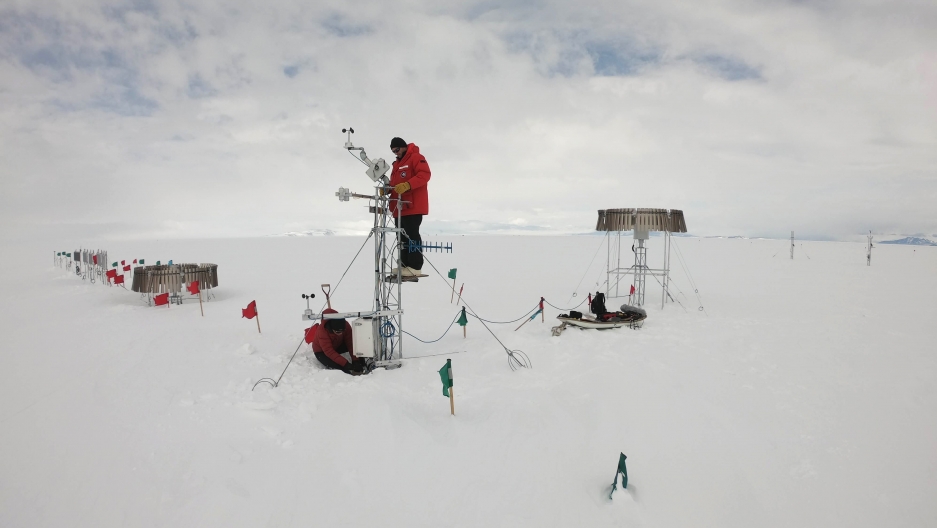 Any explorer who makes it to the planet’s southernmost continent quickly learns how to battle the wind. It howls through the unpaved street of McMurdo Station — the largest US research outpost on the continent. Here, the wind is a foe fiercer than even the cold. It is common for 100-mph winds to whip snow, blindingly, across the open ice. And this wind has posed a challenge for scientists hoping to model the future of the continent, and of our planet.

Knowing how much snow accumulates in Antarctica is key to understanding future sea level rise. But it turns out, there's no good way to measure snowfall on the continent. It's too windy. @NOVAPBS’s science editor, Caitlin Saks, was just in Antarctica with Scott Landolt, of the National Center for Atmospheric Research, and Mark Seefeldt, of the @cuboulder who are trying to figure out a good way to measure snowfall. Here, the wind is a foe even fiercer than the cold. It is common for 100-mph winds to blindingly whip snow across the open ice. And this wind has posed a challenge for scientists hoping to model the future of the continent and our planet. Go to the link in our bio to read more about why snowfall measure is crucial to our understanding of how Antarctica’s ice mass will change in the coming decades. Video by Caitlin Sacks.

In particular, the blowing wind obfuscates a seemingly simple measurement: How much snow is falling on the continent? Scott Landolt, of the National Center for Atmospheric Research, and Mark Seefeldt, of the University of Colorado Boulder, are out to solve this problem.

Related: What Thwaites Glacier can tell us about the future of West Antarctica

According to Landolt, “Antarctica and Greenland are really the last frontiers when it comes to snowfall precipitation measurement.”

The amount of snowfall is an important parameter used in modeling how the Antarctic continent’s mass of ice will change in the coming decades. As the planet warms, the margins of the continent are melting three times faster than just one decade ago. But a warmer climate also means that there is more moisture in the air, and that could mean more snow precipitating out onto the continent. That snow, in turn, compacts into ice and becomes locked in the continent’s interior. 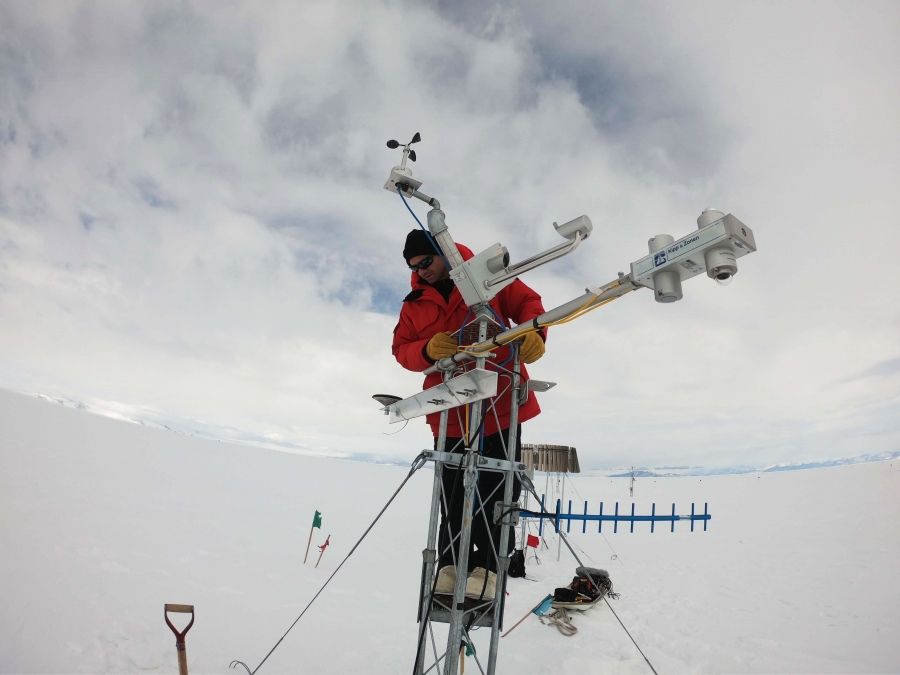 Professor David Holland of NYU, who is not involved in the project, explains that this measurement is important because, “it is one part of the equation in terms of the total volume of the Antarctic ice sheet. Is it getting bigger or smaller? Snowfall is certainly how it becomes larger.”

While total precipitation can be estimated indirectly from computer models, satellite measurements and digging snow pits, until now there has been no way to regularly measure how much snow is actually falling on the continent. In science-lingo, this is called “ground truth” — the reality of what is happening on the ground. 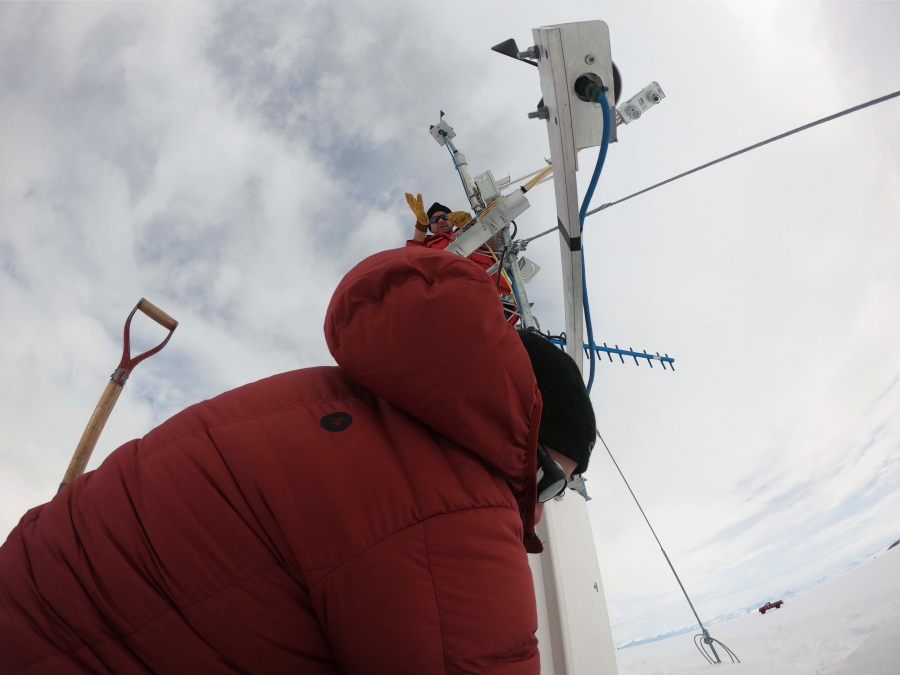 Seefeldt explains, “If we're able to show more ground truth to what the models are showing, then we are able to provide more validity to what's going to happen in the future climate.”

The challenge of building a snowfall measuring system is twofold: First, an instrument must be devised to buffer the effects of the merciless winds. Second, this system must work on its own, without a human to service it during the long winter, when the continent is plunged into 24 hours of darkness and the temperatures can easily fall below -50 degrees Fahrenheit — and that’s without the wind-chill.

Landolt and Seefeldt developed a system that is at once simple and high tech. The primary instrument is what amounts to a bucket that collects and weighs the snow. The weight of the snow, not depth, is what matters.

Landolt says, “What we're really trying to do is look at how much water is actually being added in to the frozen component of the ice shelf and the ice sheets to offset what is being melted into the oceans.”

Surrounding the instrument are two concentric circles of metallic fins. These act as wind baffles to disrupt the horizontal wind flow and allow the sensor to capture the vertical snowfall. The research team dubs these cacophonous fins their “Antarctic wind chimes.” 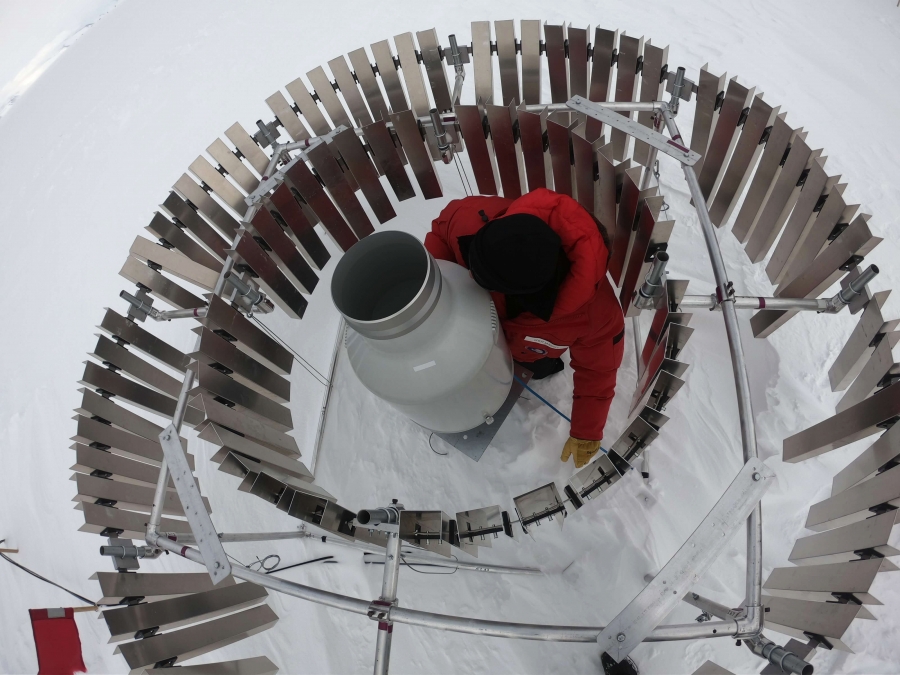 To help corroborate the data, a suite of other instruments also monitors the snowfall by measuring properties such as windspeed, particle size and height of the snow below the instrument. They have even deployed video cameras to give a visual on the storm.

The set-up is automatic, and all the data are remotely transmitted back to the States, allowing the researchers to monitor Antarctic snowstorms from the comfort of their desks. Power is supplied by a mere sixteen 12-volt batteries. In Antarctica, where energy costs are considerable, the whole system has been designed to operate on an average of only 3 watts —  less than a traditional incandescent nightlight.

The system was first deployed during the 2017-2018 Antarctic summer field season (which is winter in the US). This season, Seefeldt and Landolt returned to service the four measurement sites. While they are successfully measuring snowfall during certain events, there is much work to be done. They aim to improve the quality of the data so that they can have a reliable and continuous record of snowfall for an entire season.

“The hope is we're able to add more sites and in more critical locations,” Seefeldt says.

David Holland claims that such a network could improve weather models. 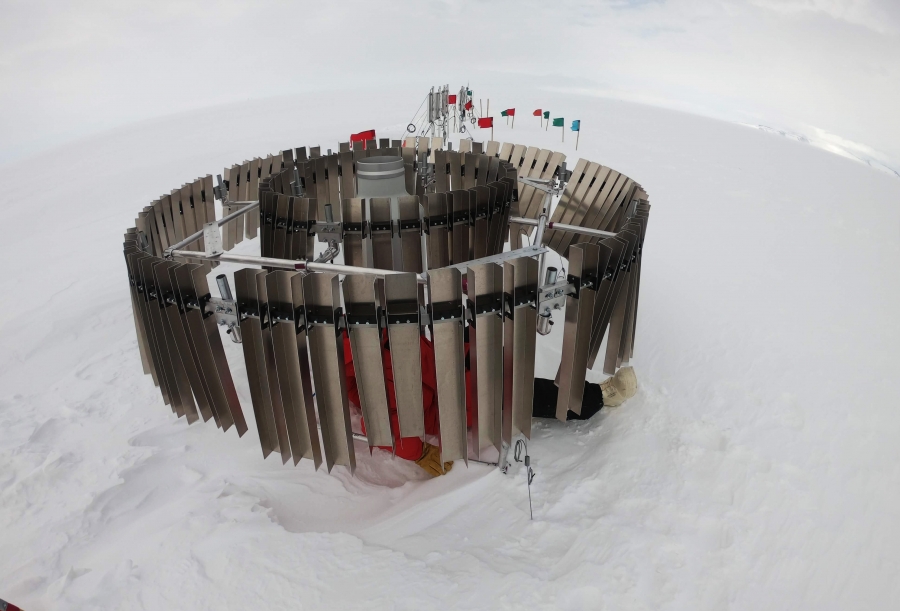 As for climate predictions, Seefeldt has his sights set on West Antarctica: “Measuring precipitation there is much more critical to understanding mass balance than it is where we're currently located.”

West Antarctica is the theater where scientists predict the most dramatic changes in ice mass will play out this century. Much of the ice there is at risk of catastrophically destabilizing and melting away. This could happen fast — potentially, much more quickly than the gradual pile-up of snow inland — and it would have dire implications for sea level.

While the question of the balance of snow-gain versus ice-loss is crucial for a better understanding of Antarctica’s future, few scientists believe that a snowier Antarctica could counteract the effects of a warming ocean as it steadily eats away at the margins of the southern continent.

You can find more reporting on Antarctica from Caitlin Saks' on NOVA.