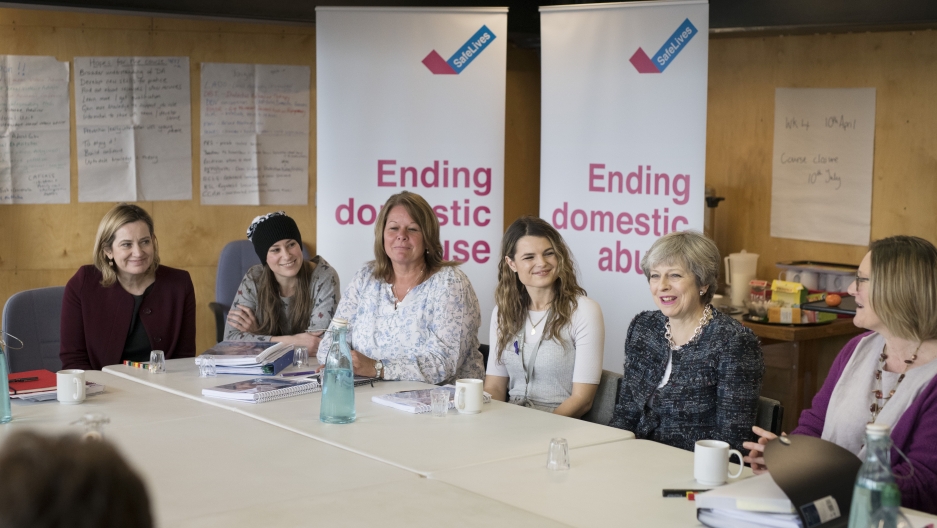 Britain's Prime Minister Theresa May and the Home Secretary Amber Rudd drop in on a training session for Independent Domestic Violence Advisors at House Mill in Bow east London, March 8, 2018.

The thing Anna remembers most about her 14-year marriage is being broke all the time.

Despite working three jobs for more than 60 hours a week, all of her money went to pay for the utility bills, child care, food and repairs to the house she and her husband owned together just outside London.

It was never enough. Her husband didn’t help financially. Instead, he took out credit cards to go on expensive weekend getaways — without her or their three children.

Anna is a pseudonym — to protect her identity. She says her husband refused to provide for childcare because he thought it was her responsibility as the mother.

All the money Anna put into their joint bank account for the bills wasn’t enough. The account quickly became overdrawn — at one point, they were in the red by 7,000 pounds. Her husband, instead of simply depositing money into the account, forced her to take out a loan to cover it. The one time they withdrew from his separate account, he blew up.

Related: The Violence Against Women Act is unlikely to deter domestic violence — here's why

“And he said he said he was completely and utterly embarrassed. How dare they use his money. And he tried to punch me in the face in the town center at lunchtime in full view of hundreds of people,” Anna said.

It was then she knew this was it. She’d had enough. She went back to work sobbing, and that’s when a co-worker gave her the phone number of a women’s shelter. She went home, got the kids and left him.

What Anna endured during her marriage is considered financial abuse. She says her husband forced her to co-sign a loan to cover the bank fees, against her will. That loan left her saddled with debt after their marriage ended. He never paid any of it.

“For me, one of the main things is really about raising awareness in the public about what the abuse is. Because I genuinely did not see his behavior as being abusive,” Anna said.

In the United States, there’s an effort to amend the Violence Against Women Act to include financial abuse. That legislation was just temporarily reauthorized as part of the deal ending the shutdown.

Anna said she always thought of abuse as physical. She recalls a poster on a bathroom stall of a woman who was bruised and battered and thought that’s what abuse was — she never saw her husband’s coercive or controlling behavior as abuse, too. Anna suffered from physical abuse, as well.

Nicola Sharp is the director of a UK-based organization called Surviving Economic Abuse. She says the financial coercion that Anna endured can be hard to prove.

“So, it's really difficult to prove because unlike physical violence, for example, there are no physical injuries to see,” Sharp explained. She said that usually, financial abuse is charged alongside other crimes. “But what we've found in relation to this piece of legislation is that when people are charged with this offense, it is usually alongside a physical or sexual offense. It’s very rare to see a coercive controlling behavior or offense prosecuted on its own.”

Sharp says that adding financial abuse to the UK draft legislation gives victims more confidence when they do come forward.

The draft bill going before Parliament will also force offenders into a treatment program aimed at changing their behavior.

According to a UK crime survey, 2 million people between the ages of 16 and 59 are victims of domestic violence. According to the National Statistics office, 1.3 million of those victims were female and there were approximately 38 arrests for every 100 cases reported. The legislation was created after hearing from a number of survivors of domestic and financial abuse and organizations who advocate on their behalf as part of a national survey in May 2018.

The proposed legislation would also encourage police to look into financial as well as physical abuse. And it would provide funding to train bank officers to recognize the signs of financial coercion.

Penny East, who works with a UK-based organization called Safelives, says that’s a big deal because loan officers could change the outcome for women being coerced in this way.

“Like, for example, if a woman was to go into her bank and asked to take out a large loan, rather than just letting her sign the document, it's just about having that question or having that training just to double check,” East said.

Her organization talked with a lot of women who had similar experiences to Anna's, who wished someone at the bank would’ve stopped them from signing the form and taking on the debt. She says loan officers would get training to spot things that don't seem right and ask questions.

Loan officers would be trained to verify decisions with statements: “You know you're completely happy with the loan you are choosing, that you've chosen this independently to take out this loan, et cetera, et cetera.”

In Anna’s case, she says a question like that might have kept her from taking out that loan in her own name to cover her husband’s expenses. In retrospect, she wishes a loan officer had looked at their bank statements and stepped in.

“In my mind, to someone who didn't know what they were looking for, it would have been really obvious looking at our bank statements to know what was going on,” she said.

Financial abuse, East explains, puts women in a very vulnerable position and makes it tempting to go back to their abusers — especially if they continue to control a woman’s access to finances.

“We found that 70 percent of survivors who talked to us said that money was being used as a way to control them,” East said.

That ranges from not being able to contact a landlord or get mortgage documents. In some cases, their partners’ control went to the extreme, East says.

East says that when women do leave the home they share with their abuser, they often end up in a shelter or staying on someone’s couch or with friends because they don’t have the financial means to get a place on their own. So, that makes it tempting to go back to their partner who is causing the abuse in the first place. She says training and legislation is a huge step in making women’s lives better. But, it’s not the whole solution.

“I think it's only going to be successful if it comes with the right amount of resources and funding and training," East says. "Domestic abuse isn't going to be solved by a piece of paper alone or a piece of legislation unless the police and the courts have the resources and the understanding of the dynamics of domestic abuse. And the fact that it isn't always physical and it isn't always visible.”

It’s unclear when the bill will be heard in Parliament because of all the negotiations around Brexit. Nicole Sharp and Penny East say the government seems to be making this a priority once the Brexit gridlock ends.

After Anna left her abusive husband, she was faced with a choice. She could either leave her house and start over with a new job, put her children in a different school and for the time being, rely on social services, which would put her in greater debt — or, she could move back home. She did the latter and made her husband move out. She divorced him 15 years ago and paid off the debt from the overdraft fees and all the loans she had to take out — the total was 58,000 pounds. She didn’t try to get any help from him because she “just wanted him gone.”

Today, Anna doesn’t shy away from sharing publicly about her experience and is hopeful that other people won’t have to go through what she did.