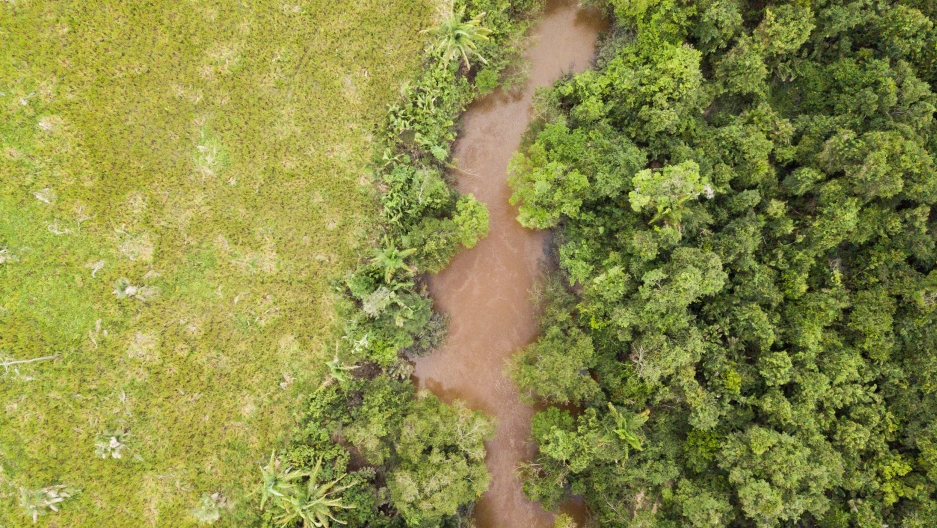 The Caru River marks the boundary between land in the Brazilian Amazon controlled by Indigenous people and that which is controlled by others. The Indigenous land remains pristine forests, while the land on the opposite bank has been converted to agriculture.
Credit:

On his first day in office, Brazil’s recently elected President Jair Bolsonaro — sometimes called the Trump of the Tropics — shifted regulation of Indigenous lands in the Amazon rainforest to the Ministry of Agriculture, an agency known to favor development over sustainability and Indigenous rights.

Critics say this is a dangerous move. Many Brazilians worry it will lead to increased deforestation, weaken Amazon protections and give Indigenous people less control over their ancestral lands.

“It’s a bit like giving the fox the keys to the hen house. ... [President Bolsonaro] really threw the advantage to those interests that want as little forest land as possible to be under Indigenous control.”

“It’s a bit like giving the fox the keys to the hen house,” said Dan Nepstad, executive director and senior scientist for the Earth Innovation Institute. “He really threw the advantage to those interests that want as little forest land as possible to be under Indigenous control.”

Brazil has long debated how much control Indigenous groups should have of their ancestral land. Bolsonaro’s solution, Nepstad says, was to take the responsibility of defining and officially demarcating Indigenous territories away from FUNAI, the National Indian Foundation, which is specifically designed for that purpose.

For some years, FUNAI has been defining the appropriate boundaries of Indigenous territories, which are then formally demarcated as off-limits to development, Nepstad explains. Now MAPA, the agricultural ministry, will be responsible for this. “The concern is that the many Indigenous territories that are in the queue will now be dead in the water and, worse, that some that are quite far along the process could actually be reversed,” Nepstad said.

Brazil has one of the world’s most diverse populations of Indigenous people — around a million people who speak a couple hundred different languages. Other groups have been living in the forests for a century or more, including communities of escaped slaves.

Brazil has one of the world’s most diverse populations of Indigenous people — around a million people who speak a couple hundred different languages. Other groups have been living in the forests for a century or more, including communities of escaped slaves.

President Bolsonaro recently tweeted: “Less than 1 million people live in those places, isolated from the real Brazil. They are exploited and manipulated by nonprofits. Together, we will integrate those citizens and give value to all Brazilians.”

To some, this sounds like President Bolsonaro thinks he's doing Indigenous peoples a favor by integrating them into Brazilian society. Nepstad and others disagree.

Among Indigenous people, there is a hunger for a better income, so they can keep their communities healthy and their customs and ceremonies alive, Nepstad says. Indigenous leaders say now that they have more control of their own territory, they need economic alternatives in order to thrive.

Environmental issues loom large over these land rights debates. The Amazon is already a stressed ecosystem and researchers warn of a tipping point: After a certain amount of deforestation, not enough forest will remain to maintain a thriving rainforest ecosystem. Nepstad believes this tipping point is not far off. Eighty percent of the original Amazon forest is still intact, and the science indicates that the tipping point for irreversible damage lies somewhere between 65 and 80 percent.

Many research studies find that the best way to protect rainforest is to empower the Indigenous people living there. Maps of a healthy rainforest and Indigenous populations overlap almost exactly.

Despite his deep concerns, Nepstad remains optimistic. One of the bright spots right now, he says, is a new set of partnerships between the organizations that represent Indigenous groups and state governments within Brazil.

He says he has seen “amazing progress” in bringing Indigenous leaders into the policy process. Even as Bolsonaro weakens FUNAI, he believes these state-level partnerships provide hope that Indigenous people will be a stronger voice in the policies that define the future of their region.

He also sees the debate shifting among the populace as more people begin to see the dangers of climate change. Despite the deniers and the rhetoric that claims that addressing climate change holds back the economy, Nepstad says, people are recognizing the advantages of saving the forests.

“When forests are falling, your kid has a much higher likelihood of having bronchitis. When forests are being burned, airports are closed and transmission lines are getting burned. There is a growing sense that Brazil has made a huge achievement and [a desire to] consolidate that achievement and really be proud of the Amazon. I think if conservation strategies tap into that hope, Brazil will contain the Bolsonaro presidency,” he said.