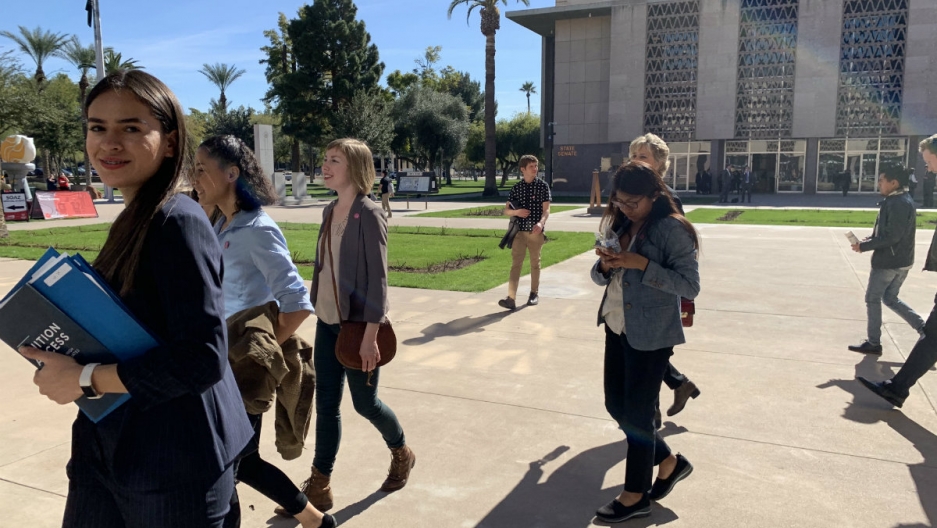 Deya Garcia, 19, leads a group of fellow community college students into a meeting with an Arizona state representative at the Arizona state Capitol on Jan. 23, 2019. Last year, the Arizona State Supreme Court ruled that offering Deferred Action for Childhood Arrivals recipents in-state tuition rates violates state law. Garcia was among those impacted by the decision.

Yael Balbuena, a 17-year-old high school senior wearing a bow tie and a blazer, wasn’t sure how the Arizona state senator who stood in front of him would react when he began recounting his life story and his preparation for college.

“I’m a ‘Dreamer,’” Balbuena said. “It is just really hard to go through this because I’ve done all the things I’m required to.”

And yet, he told the lawmaker, he couldn’t afford to go to his top choice school: Arizona State University, because his immigration status makes him ineligible for in-state tuition and financial aid. Instead, he explained, he will likely go to an out-of-state, private school that offers him a scholarship.

Balbuena is one of more than 200 immigrant high schoolers, college students and their allies, who visited Arizona’s state Capitol this week to tell lawmakers about the obstacles facing immigrant students trying to access higher education.

Balbuena, who was born in Mexico and did not have papers growing up, was able to get a temporary reprieve from deportation and a work permit under the Obama-era Deferred Action for Childhood Arrivals program before President Donald Trump tried to end the program in 2017. Court injunctions have since kept the program alive for those who already obtained DACA, but its future remains unclear.

Related: Nearly 40 percent of DACA recipients are high school or college students. Now their future is in limbo.

But in Arizona, DACA status no longer helps students like Balbuena qualify for in-state tuition at the state’s public colleges and universities. The matter was litigated for years. After the state’s largest network of community colleges offered DACA students the opportunity to pay the in-state rate, Arizona’s attorney general sued because a 2006 voter-approved law denies in-state tuition to anyone without “lawful immigration status.” Last April, the Arizona Supreme Court decided offering DACA students the in-state rate violates state law.

The court ruling was the latest twist in what has been a dizzying, 13-year roller coaster of changing policies and legal interpretations governing undocumented students’ college access in Arizona.

As a result of the court decision, DACA students saw their community college tuition more than triple last fall, forcing many students to drop out. DACA student enrollment dropped by nearly 65 percent in the Maricopa Community College District in the last year.

“It was really disappointing,” said 19-year-old Deya Garcia, who studies biology at Mesa Community College, which is part of the Maricopa Community College District. “To know that you were so prepared to continue on to college. And then having your education be threatened, for what felt like the billionth time.” 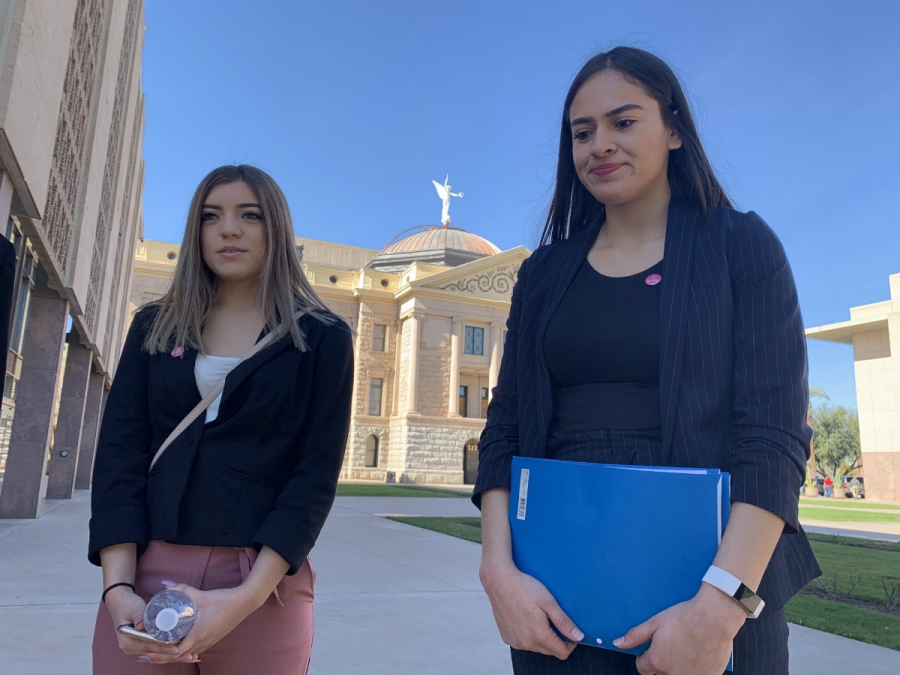 For Arizona’s 25,000 plus DACA recipients, volatility around college tuition has only compounded the uncertainty surrounding the entire DACA program. Not only is the fate of DACA the subject of multiple federal lawsuits, but Trump has changed his stance on the program several times.

Most recently, the president offered a proposal to end the partial government shutdown by offering a three-year extension to DACA recipients in exchange for border wall funding — a deal rejected by youth immigrant leaders, since it is a temporary fix and does not include a path to citizenship for them or other undocumented immigrants.

Garcia wants Arizona lawmakers to realize they can help solve the tuition problem, and should not wait for a solution out of Washington.

The event at the Arizona Capitol was organized by Aliento, an immigrant advocacy group where Garcia works part-time as a student organizer.

Garcia told legislators she can now only afford to take two courses a semester.

When Garcia saw the numbers, she said it was a “brutal reality check” to “realize just how much you're going to pay and realizing that it's not the same as if you were a citizen.”

She and other student activists asked lawmakers to support legislation that would grant all Arizona high schoolers — regardless of immigration status — a reduced tuition rate. 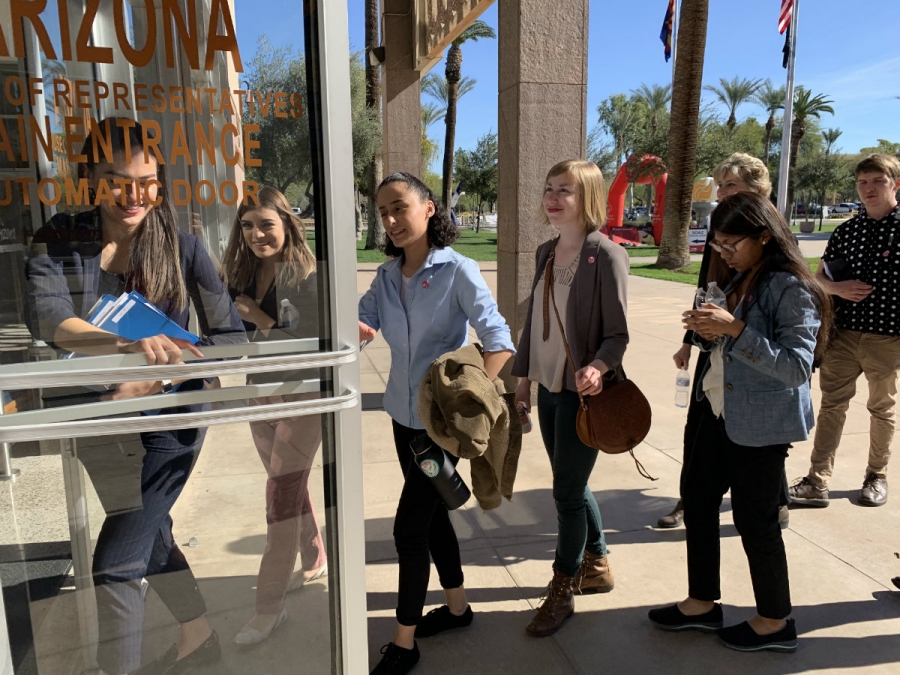 Deya Garcia, 19, left, leads a group of fellow community college students into a meeting with an Arizona state representative at the Arizona state Capitol on Jan. 23, 2019. Garcia and the students were there to lobby for in-state tuition for Deferred Action for Childhood Arrivals recipients.

There didn’t seem to be much visible opposition at the Capitol to the students’ message, except for a lone protester who inserted herself into Yael Balbuena’s conversation with state Sen. Kate Brophy McGee.

“If they aren’t residents of Arizona, why would they get in-state tuition?” asked the protester, Jennifer Harrison, as she live-streamed the confrontation to the Patriot Movement AZ Facebook page. At one point, Harrison shouted at the state senator, “You need to put the needs of Americans before illegal aliens!”

The encounter did not seem to faze Brophy McGee, a Republican, who said a colleague was working on a bill that would address the tuition issue, and she intended to support it. She praised the students for their professional approach.

“I want to see these kids educated and I want to see them become part of the American dream,” Brophy McGee said after the meeting. “I think they are constructively using the process, and learning about it while they do it.”

State Sen. Heather Carter, also a Republican, confirmed she is drafting a bill that she said will “make our state universities and community colleges more affordable and accessible to students who would like to continue their education beyond high school.”

Carter said she is planning to introduce her bill next week.

The Arizona Chamber of Commerce and Industry has also come out in favor of finding a way to give Arizona DACA students more affordable tuition.

“We’re now in an economy where there are more jobs open than human beings to fill them,” chamber president and CEO Glenn Hamer said. “We need workers of all skill levels.”

While college access has recently gotten more difficult for young immigrants in Arizona, the national trend is the opposite. DACA and undocumented students in 21 states now get in-state tuition and, in some cases, state financial aid. Six states, including Arizona, deny in-state tuition to unauthorized immigrants.

Roberto Gonzales, a professor at Harvard Graduate School of Education, has studied the impact on DACA students in several states. According to Gonzales, Arizona’s restrictive policies limit opportunity for the DACA recipients in the state.

“What we've learned from our research in Arizona, in particular, is that DACA beneficiaries in Arizona worry more about their futures and have found less success in their pursuit of higher education,” Gonzales wrote in an email. “In fact, when we compare their responses to DACA beneficiaries in states like California and New York, the differences are striking.”

At the same time, Sociologist Amy Hsin at Queens College, City University New York, found that even with access to in-state tuition, some DACA students in New York still have been unable to stay in college without access to federal or state financial aid. 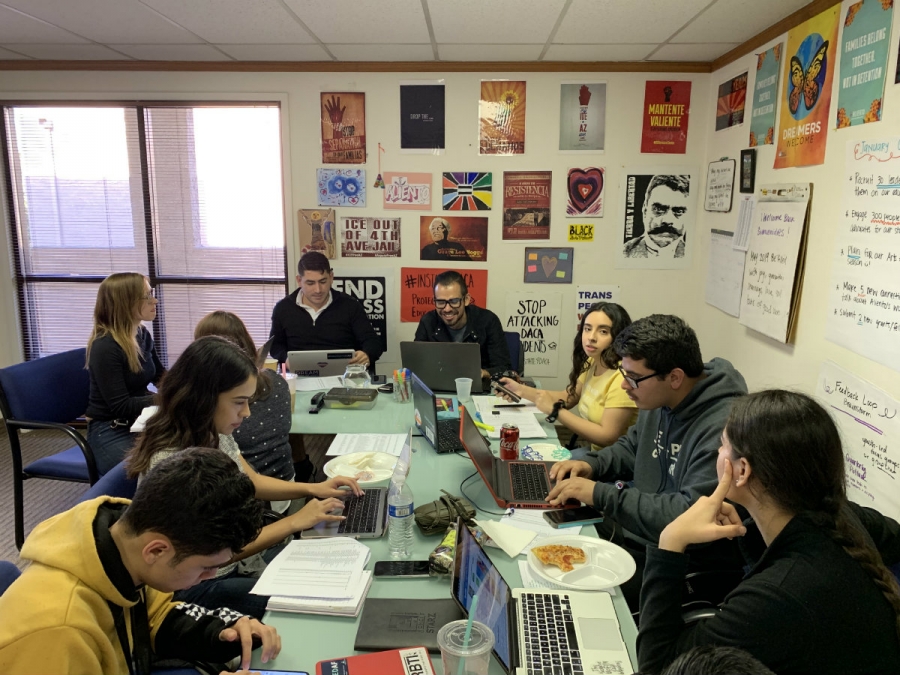 Immigrant students and their allies at the Aliento office in Mesa, Arizona, prepare for their visit to the Arizona state Capitol on Jan. 21, 2019. The students want lawmakers to support legislation that would grant all Arizona high schoolers, regardless of immigration status, in-state tuition.

Patiño, who is now Aliento’s policy and advocacy director, graduated from high school in 2007. He was stunned when a scholarship he won to attend Arizona State University was rescinded because of his undocumented status. At the time, the 2006 law barring undocumented students from in-state tuition had just taken effect.

“I was so weirded out,” Patiño remembered. “I was like, ‘What do you mean? What happened?”

That 2006 law mobilized many of Arizona's young immigrants, including Patiño, to become activists. They joined with undocumented youth across the country in 2010 to push Congress to pass the DREAM Act, a failed bill that would have given them a path to citizenship.

The Obama administration created DACA in 2012, after “Dreamer” activists pushed for a stop-gap measure until Congress passed permanent reform. But a bipartisan comprehensive immigration reform deal fell apart the next year.

Patiño said he is not counting on a permanent solution for DACA recipients under this administration.

Patiño said given the stalemate at the federal level, he is interested in local and state-level strategies to help both DACA recipients and undocumented youth gain more opportunities.

When Arizona’s previous governor barred DACA recipients from getting driver’s licenses in 2012, young activists in the Arizona Dream Act Coalition sued and won licenses for themselves and other immigrants.

Patiño believes ensuring that the next generation of “Dreamers” can access college will benefit the larger immigrant rights movement.

“They used to call us illegal immigrants or illegal criminals,” Patiño said. But, he said, the narrative changed “once we got educated, and once we have those degrees, then we can prove our contributions.”

Back at the Capitol, students felt encouraged by the positive reception they got by legislators on both sides of the aisle.

“I think it went quite well,” Deya Garcia said after she led a small group of community college students to talk with her local representative.

If there is one lesson the youth immigrant rights movement has learned over the years after many unexpected twists and disappointments, it is to be skeptical of politicians’ promises.

“You can’t be too naive and have people sweet talk you into thinking they support you,” Garcia said. “They have to show you.”