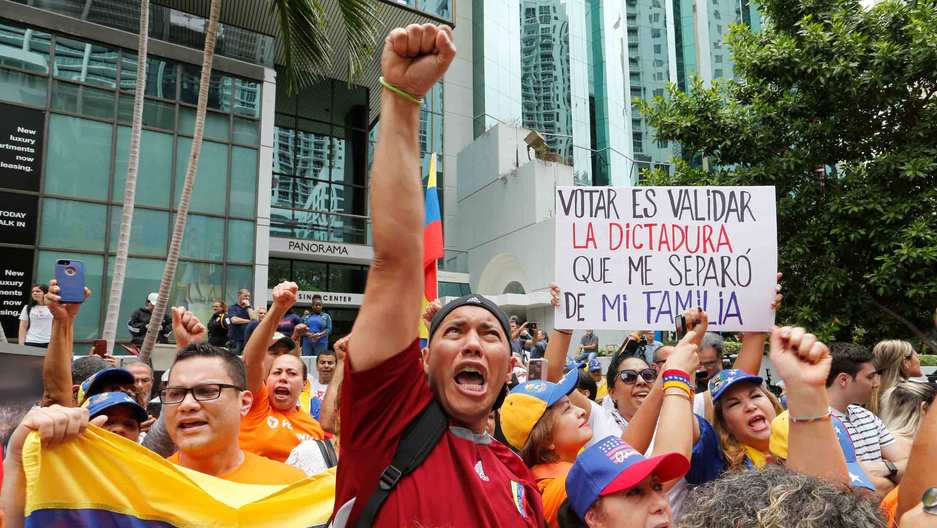 Millions have fled Venezuela in the past two years as inflation and political instability have made the country a difficult place to live. According to UN figures, more than 3 million Venezuelans live outside their home country, the largest exodus in the recent history of Latin America.

The World's Marco Werman spoke to Democratic Rep. Darren Soto of Florida about the bill.

Related: All but 'nonessential' US diplomats in Venezuela stay put despite Maduro's order to leave

Darren Soto: Well, we understand, particularly with the advent of the murderous Maduro regime, that political asylum makes sense from a civil rights and refugee point of view. We have over 233,000 Venezuelans in Florida alone and over 3 million have left the country since Maduro took office. We see freedom of speech has been eliminated, political opposition has been murdered, people's businesses have been taken. It is one of the worst human rights crises that we have in the Americas and with the United States being a beacon of freedom and having a long-standing tradition of being a haven for refugees, we felt it was critical. The bill is bipartisan in the house, as you correctly mentioned. I introduced it with Mario Díaz-Balart, a Republican congressman from south Florida. In the Senate, Bob Menendez is joined by fellow Floridian Marco Rubio. And we already have other Democrats and Republicans joining to co-sponsor at this point.

Marco Werman: Does it make it more likely that this bill will pass and that President Donald Trump will sign it?

Of course, it's absolutely essential for its possibility to be passed that it be bipartisan. We have a Democratic House, now we have a Republican senate, a Republican president and frankly, a Republican president who has not been a big fan of TPS. However, we have the Trump administration first levying sanctions on the Maduro regime and now recognizing the opposition leader Guaidó as the acting president since under the constitution, Maduro's election was fraudulent. So, this would be consistent with those moves to allow another tool to be used to help bring democracy and freedom back to Venezuela by giving folks Temporary Protected Status here in the United States.

Congressman Soto, you represent a district in central Florida in the Orlando area. Are there a lot of Venezuelan exiles already there, and if so, what stories are you hearing from them?

We have over 33,000 estimated Venezuelans — the majority are exiles in central Florida. Over 200,000 in south Florida. So, from the Sunshine State, we're talking massive numbers. Not a day goes by where we don't hear from new Venezuelan refugees asking for assistance with political asylum. It has, in fact, inundated my office and other offices of members of Congress. And right now, they have to apply individually. This would give an automatic Temporary Protected Status, something we've done before for Haitians and we saw it in countries in Central America like Guatemala, El Salvador and Nicaragua, back after natural disasters and we've done it for refugee status for places like Sudan.

As we mentioned, TPS programs are being ended for other nationalities by the Trump administration. How do you feel about that?

So, that is their push. However, as we negotiate the end of this shutdown, I believe that TPS will be part of a grand deal, should we get one together. So, I don't think the rest of that story is written just yet. Dreamers, TPS are two things that are being discussed and particularly to give them an eligibility for residency — that will be something that the US House will be pushing for as we navigate through this.

TPS programs need to obviously be renewed if they're to continue, but do you see some hypocrisy here, that some TPS programs are being ended and others are being started?

Well, the program is temporary. So, programs will end at some point. But the key is that if folks are here for 10, 15, 20 years, they're integral in the economic and social fabric of our nation. We can make a decision at the end to grant residency, but it isn't hypocritical because these programs are temporary, and some will end. Certainly, with these long-standing programs though, I think the right call is residency.