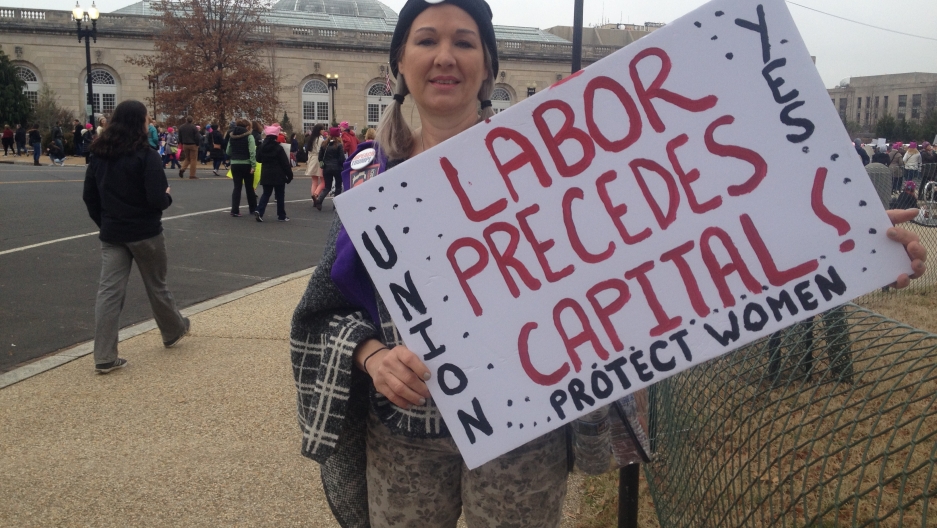 Nanette Senters is one of roughly 1,500 workers at the General Motors factory in Lordstown, Ohio, that will no longer be working there come March.

“Pick it up out of the rack, lift it up on my shoulder, and throw it over the car to the other guy, so he could catch the other side and then we would bolt it down. And that was our job,” says Senters.

She says it’s gotten easier with advances in machinery and hydraulics. And Senters considers herself “damn lucky” to work for GM. When she was hired, she was a divorced mom raising two kids.

“The stress is so intense that you can barely breathe sometimes,” says Senters. “And after I went to GM I was able to take a deep breath — OK, you got health insurance, you got vision, you got dental, you can get a decent job where you're going to bring in a paycheck that can pay the bills and maybe even be able to do something like have a vacation.”

But all that security will soon be gone. GM is shutting down its Lordstown plant in March, and 1,500 workers, including Senters, are losing their jobs. GM says its closing four US plants, and one Canadian, to better position the company for long-term growth, and that the company remains committed to American manufacturing.

GM’s announcement has been a thorn in the side of President Donald Trump, as one of his major promises has been to bring jobs back to the United States and stop the offshoring trend. Manufacturing jobs in the US have steadily ticked upward since Trump took office, a trend that began under President Obama. But it’s a murky picture. Many American companies continue to send jobs abroad with devastating impacts on American communities.

“Carrier and Honeywell and Harley Davidson, I mean the list just goes on and on. They just keep offshoring our work because they can abuse workers around the world, and all so they can rub a few more nickels and dimes together in their stock accounts. They don’t understand that they’re destroying lives.”

Across the Midwest, GM workers are angry that the company isn’t downsizing its operations in China or Mexico instead. Senters is disgusted by American companies that keep chasing cheaper foreign labor.

“Carrier and Honeywell and Harley Davidson, I mean the list just goes on and on,” says Senters. “They just keep offshoring our work because they can abuse workers around the world, and all so they can rub a few more nickels and dimes together in their stock accounts. They don’t understand that they’re destroying lives.”

Related: Trump hypes jobs relocating back to the US. Are they?

General Motors has been trying to find new positions for its employees at the factories it's closing. Senters, who is 55, says GM did offer her work at an aluminum foundry in Indiana, some 400 miles away.

She turned it down though because her family, including her elderly mother, is in Ohio, “and I'm going to be a grandma in June, so I don't want to uproot my life and move to, you know, ‘Wherever America.’” 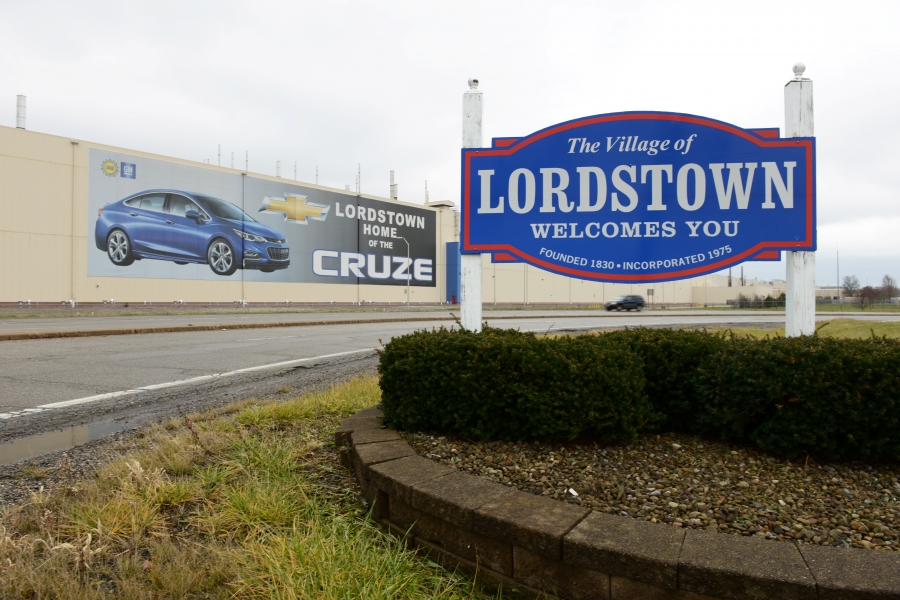 The General Motors Lordstown, Ohio, complex opened in 1966. The plant pays nearly $400 million to workers there, generating close to $80 million in payroll taxes. It’s scheduled to shut down in March.

But Senters' decision may have consequences. It’s tough for laid off, middle-aged, blue-collar workers to rebound.

“This is exactly the cohort that struggles the most, socially and economically, when we have these layoffs,” says David Swenson, an economist at Iowa State University.

Related: Insects slipping into the US are causing billions of dollars in damage

Researchers at Ball State University in Indiana, who are also studying workers vulnerable to offshoring and automation, say a layoff can impact several generations.

“It’s a monumental fantasy that these factory jobs are going to come back, regardless of tariff policy or threats. There’s just not an environment where that is plausible.”

“A kid whose parent loses their job either to automation or to offshoring is more likely to have to repeat a grade, they are more likely to be expelled from school, or to be suspended from school. They have less educational attainment over their lifetimes,” says Emily Wornell, a sociologist at Ball State University.

Researchers agree: To compete in a global economy, the US needs to invest more in education so that the next generation doesn’t suffer because of current job disruptions. And we need to admit: What we’ve been doing isn’t working.

“We really do need to start thinking more creatively about what our policies would look like,” says Wornell.

Some academics and policymakers are proposing tax credits for employers that hire workers in distressed communities, or wage subsidies for workers.

Economist Michael Hicks, the director of the Center for Business and Economic Research at Ball State University, says right now, policies are focused on helping people who are struggling. But we need to be worrying about struggling cities and towns too.

When there’s an economic shock, Hicks says state and local governments may need to help households relocate to areas with more jobs, or finding ways to support local institutions, for example, getting laid off workers jobs at schools that need help with maintenance and coaching.

“The resources ought to be aimed at not making men feel good who lose their jobs, but making them do things that make that community more likely to survive, and making the children who are maybe suffering from that more likely to thrive,” says Hicks.

“It's not a not a feel-good policy. It's a forward-looking policy, which I think is very different than the approach of the past few years, which has been, ‘Let’s just train people for jobs, get them into employment.’ And there's nothing different in this nation's workforce-investment system than we saw in the 1960s quite candidly.”

Hicks adds, governments need to confront some hard truths. “It’s a monumental fantasy that these factory jobs are going to come back, regardless of tariff policy or threats. There’s just not an environment where that is plausible.”

“The difficulty in answering this question is the policy has already failed these workers. I really don't know what the future does hold for them, and I think that that's a really difficult thing to say, it's a difficult thing to research.”

But what about the man or woman who is 45 and just lost their job at the factory and doesn’t want to shift their life?

“The difficulty in answering this question is the policy has already failed these workers,” says Wornell. “I really don't know what the future does hold for them, and I think that that's a really difficult thing to say, it's a difficult thing to research.”

Joseph Geevarghese, executive director of the worker-advocacy group Good Jobs Nation, still argues: “It is not too late. The workers themselves have power.”

For example, General Motors workers in Canada have been engaged in sit-down strikes. And the United Automobile Workers is encouraging a boycott of the Chevy Blazer, which shifted production from the US to Mexico.

“The truth is GM and the US government are tied at the hip. GM is a major federal contractor — it received over $700 million dollars in lucrative federal contracts last year,” says Geevarghese.

Geevarghese wants the president to use his statutory power — through executive order — to block contracts with companies that offshore jobs.

“Donald Trump talks a good game. He ran as a worker champion. He promised to punish corporate offshores. Yet, he's refused to do it.

“Donald Trump talks a good game. He ran as a worker champion. He promised to punish corporate offshores,” says Geevarghese. “Yet, he's refused to do it.

Economists say blocking federal contracts is an intriguing idea, but easier said than done. Breaking long-term contracts would almost certainly wind up in the courts. And if fewer firms can bid for things like selling cars to the government, that could raise prices, which would ultimately be borne by the American taxpayer.

But back to the middle-aged workers in Indiana, Ohio, and Michigan, who have already lost or are losing their jobs. What is Geevarghese’s prescription for them?

“I don’t know if there is a good solution,” says Geevarghese. “These workers will never regain what they have lost. I wish I had something hopeful to offer, but the truth is once these good manufacturing jobs leave, there's nothing left but fast food, healthcare — low-wage service jobs."

And what is Nanette Senters’ — the GM worker in Ohio —reaction to the bleak outlook many are predicting for people like her?

“I absolutely agree with that prognosis,” Senters says. “Who’s going to hire a 55-year-old washed up auto worker? Nobody is going to hire me. It’s not going to work out good for me. I’m scared. I’m scared. But I'll survive because, you know, I'm tough. And most Americans are.”