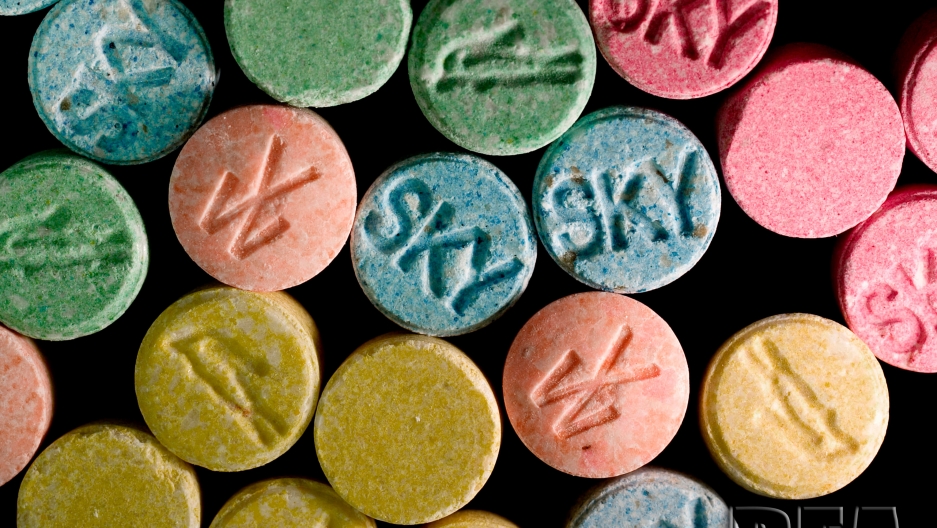 Ecstasy pills, which contain MDMA as their main chemical, are pictured in this undated handout photo courtesy of the United States Drug Enforcement Administration (DEA). Molly is the street name for a drug that is commonly believed to be the pure powder form of the banned substance known as MDMA, the main chemical in ecstasy.

At least some of those deaths over the summer involved MDMA — the drug also known as molly or ecstasy. Pill testing would allow people at festivals, who plan to take ecstasy pills or tablets, to test them for things like harmful chemicals, or dosage, first.

Cate Faehrmann, a member of the New South Wales parliament, is one of the more outspoken advocates for pill testing in Australia. She recently "came out" as a former MDMA user in an op-ed in The Sydney Morning Herald.

In her piece, Faehrmann wrote, "It’s beyond time for an honest discussion about drugs if we are to keep young people safe who choose to take them. I know from experience just how many of them will."

The World's Marco Werman spoke to Faehrmann about the controversy surrounding her statements and proposed pill testing.

Marco Werman: What is pill testing? How does it work?

Cate Faehrmann: We've had one test in one state — which is the Australian Capital Territory, where Canberra is — and basically there's a big tent. Young people can come in, they can get their ecstasy tablets tested by medical professionals, by chemists. They also are able to speak to health professionals. And the first thing they're told is, the safest thing to do is not to take this drug. But if they then say, "Look, I really want to take it, tell me what's in it. Is it safe to take?" they will then be told the chemical makeup. And what we do know is that deadly substances are found, sometimes, in these tablets or very strong dosages are found and people are either advised not to take them, and many of them don't, of course, or they are told how to take it as safely as possible. So, it's a harm reduction approach instead of a zero tolerance approach, and it works.

Yeah, and you're talking about this because these deaths could have been prevented. And you came out very openly in The Sydney Herald writing about your own use of MDMA — some people call it ecstasy. I mean, you did not hold back. You said you took ecstasy on a pretty regular basis. What kind of reaction have you got to that?

Actually, quite incredible in terms of support. I think the tide is really turning here because we've seen deaths under the existing zero tolerance, hard-line policing approach here in Australia. So, we have to try another approach. We also talked about the hypocrisy in terms of legal drugs, such as alcohol, prescription drugs and tobacco. My mother was horribly addicted to prescription drugs and a very heavy smoker and died of cancer too early in her life. I just want young people to firstly hear politicians that understand their experiences. But I also wanted to say, "You know what? Here in Australia ... we've got a population of 25 million. Three million adults have admitted to, in some stage in their life, taking an illegal substance. Clearly the war on drugs is failing, and it's costing young people their lives and it's time we just pulled their heads out of the sand."

What do you say to politicians who say, "Well, pill testing would be a green light to drug users and lead to more deaths."

Again, these people are living on another planet. Because hundreds of thousands of people are admitting to using MDMA, anyway. A recent survey found that 60 percent of young people at festivals admitted to using MDMA. So, clearly there's more who took it who didn't admit that they're using it. This is despite all of these police dogs and out front, very high visible policing. So, people are getting through the gates somehow with the drugs. All they're buying is probably quite dirty stuff inside the gates. And they're doing it anyway. They are not going to do it more with pill testing in there. That's ridiculous. But what pill testing will do is alert them. If there's a bad drug in circulation — what the pill testing health organizations that run these tents do is distribute flyers throughout the festival, distribute alerts on SMS and all that. All of this to basically let people know that there are these dangerous drugs in circulation. "Don't take this drug, which is a yellow pill with this image on it," for example. That's what safety is about. Because you know, heads in the sand, "Don't do drugs." Gee, look how well it's going. We've had six young people die this summer. And it's not working. So, my message is to the moral crusaders: You guys are the ones who are putting young people's lives at risk because you are not prepared to admit that your war-on-drugs approach has failed. We have to start there.

Why do you think that is? Why has the war on drugs failed in Australia?

Well, I think it's probably failed in your country as well.

I mean, I want to hear what's happening in Australia because it's not been exactly a triumph here in the United States.

Yes, well because, I think ... the uncomfortable truth is the vast majority of people who take illegal drugs will do so relatively safely, and they'll do so because they want to relax or they want to have a good time with their friends. Maybe admitting that — that's the truth. These are the facts. But me as a politician admitting that has just made other politicians absolutely freak out to the biggest extent I think I've ever seen on this issue. They are calling me reckless and saying I'm encouraging drug use. These are the facts. Millions of Australians do it. Let's start with the facts.

And how are the pill testing trials that you're doing in the area around Canberra going? I mean are politicians, your opponents, looking at that and seeing anything?

You know, we've finally been able to do one because of the clampdown afterwards and the hysteria by governments, and the police, unfortunately, as well. I've been contacted by festivals who are desperate to be able to test their pills. These guys, who run festivals, they know what kids get up to. They know that the vast majority of people who are walking to those parties are going to somehow get their drugs in there, or they are going to buy drugs in the festivals. Police have tried to stop this for years and years; they've failed. So, you know what? All we're asking for, as well, is to continue the trial. We're not even saying, "Let's bring it in definitely. Let's bring it in everywhere." We're just wanting a trial.