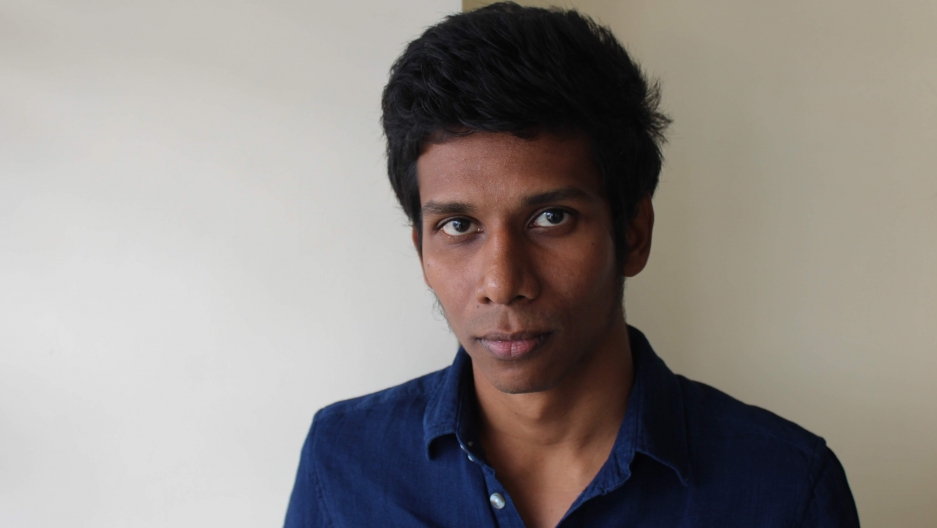 Than Toe Aung faced harassment and discrimination as a Muslim in Myanmar his whole life. Now he's using slam and spoken word poetry to speak out against hate and unite Buddhist and Muslims in the city of Yangon, Myanmar.

On a hot summer night a few years back in Yangon, Myanmar’s biggest city, Than Toe Aung, then 21, was restless. So, he did what most of us do these days when we can’t sleep: he got on Facebook.

He wanted more. So he went to YouTube, typed “poetry slam,” and scrolled through videos. “I think I spent hours,” he said.

Alone in his room at his parents’ house, Than Toe Aung began watching video after video of poetry performances about race in America, including "Black Privilege," by Crystal Valentine.

Poetry has a rich history in Myanmar’s political transformation. Eleven poets in Myanmar’s parliament were also activists and former political prisoners. But Than Toe Aung hadn’t heard poetry spoken with that kind of rhythm and power — a form of poetry defined by struggle and social justice and deeply rooted in the American civil rights and Black Lives Matter movements.

“It just really moved me,” he says. “Tears welled up in my eyes. And I just thought ... we should do something like that.”

Than Toe Aung connected with Olayiwola and Valentine’s messages about racial injustice and wanted to make poems like the ones he’d heard on YouTube.

Like many in Myanmar who grew up under military rule, Than Toe Aung expected life to improve under its newly elected democratic government. Between 2011 and 2015, Myanmar went through a series of political reforms that offered hope for a more democratic and inclusive society. But Than Toe Aung says it’s getting worse for Myanmar’s ethnic and religious minorities, especially for Muslims.

A coordinated ethnic cleansing campaign against the Muslim Rohingya in Rakhine state has been referred to by several UN agencies as genocide, prompting more than 700,000 Rohingya to flee. And then there are people like Than Toe Aung — Muslims living in big, modern cities, facing more subtle Islamophobia in the majority Buddhist nation.

“The racism a black person would face [in the US] would be different from the kind of racism that Muslims are facing right here, so it’s not a perfect match, but I feel this minority connection,” Than Toe Aung said.

When Than Toe Aung was a kid, he says he was the only Muslim in his classroom, where people addressed him with the word kalar, a derogatory term used for Muslims.

“I think it is more or less equivalent to the N-word in America. In the classroom, the kids would just call me kalar instead of using my real name,” Than Toe Aung said.

It wasn’t just kids shouting the K-word at him. Than Toe Aung’s teachers also used it to refer to him. Even his school textbooks had the word printed inside. As a kid, Than Toe Aung says he remembers feeling like his darker skin was somehow dirty.

When he stumbled upon African American women’s slam poetry, Than Toe Aung felt he recognized himself in their stories. That same night, he messaged some of his writer friends, asking if they’d be interested in performing their poetry in a slam poetry event in Yangon.

A group of nine got together the next week. Than Toe Aung collaborated with a Buddhist friend, Aung Kaung Myat, to write a poem about their different experiences growing up Buddhist and Muslim. The poem was about privilege.

Than Toe Aung and Aung Kaung Myat performed the poem together in front of dozens in Yangon.

“I felt like those words got into me and I was almost tearing up, reading it loudly,” he said. “People were all silent and just listening, all full attention. And at the end, we got a huge applause.”

When a friend suggested they post a video of the performance on Facebook, they filmed a version of it at home and Than Toe Aung uploaded it. It got over 21,000 views.

Than Toe Aung went on to organize nine poetry slam performances with Buddhist and Muslim artists, talking about race, justice and love.

“I felt like those words got into me and I was almost tearing up, reading it loudly. People were all silent and just listening, all full attention. And at the end, we got a huge applause.” 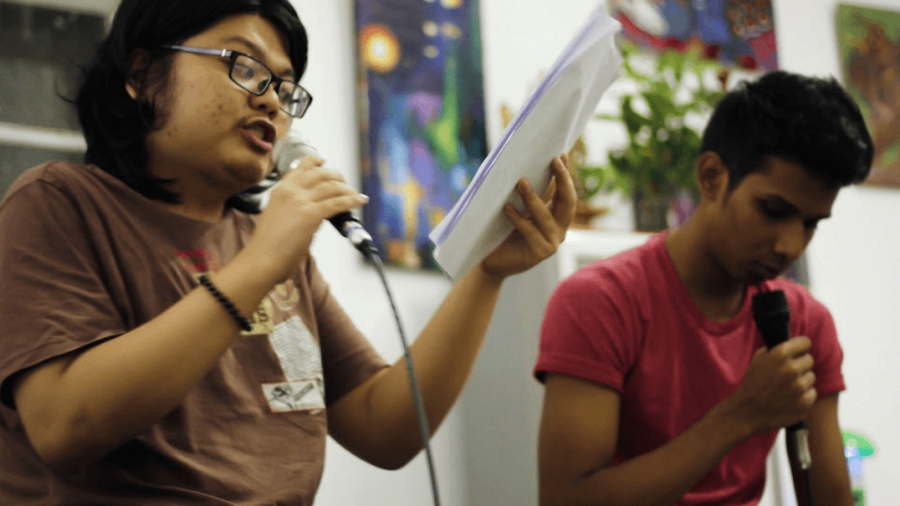 Muslim Myanmar poet Than Toe Aung collaborated with a Buddhist friend, Aung Kaung Myat, to write a poem about their different experiences growing up Buddhist and Muslim. The poem was about privilege.

One night a few months later, Than Toe Aung was walking home, thinking about his writing. He stopped under a street light in a bustling area of downtown when a white van pulled up next to him and six policemen got out and chased Than Toe Aung, pinned him down and handcuffed him. He says they seemed drunk.

“I thought literally, 'I’m going to die today,'” Than Toe Aung said. “They put me in a car, and there was this one guy constantly kicking me in the ribs. It hurt so much I could barely breathe.”

Than Toe Aung says they brought him to a police station and interrogated him. He never learned why. His dad finally bribed the police to take Than Toe Aung home and then urged him to keep quiet about what happened.

“I was in dilemma because when I talk to my activist friends, they were like, 'you have to speak up.'”

For Than Toe Aung, this dilemma carried the weight of nearly one million Muslims subject to discrimination, abuse and violence. As he weighed his options, he also thought about his own family.

“Also in my heart, there [were] clashes. But finally, I thought … I consider myself [sic] a defender of human rights … Maybe later at one point in my life, if my older self looks back at this incident and sees my younger self, you know, he would be really disappointed in me … [if I don’t say something].”

Than Toe Aung decided to speak up. Six nights after the arrest, he posted a detailed account of what had happened, including photos of his bruised body on his Facebook account. The post was shared more than 50,000 times and received nearly 2,500 comments.

For Than Toe Aung, this dilemma [to speak out] carried the weight of nearly one million Muslims subject to discrimination, abuse and violence.

In Myanmar, Facebook is essentially the internet. When people need information, they generally bypass Google and head straight there. The Kyauktada township police station, where Than Toe Aung was taken, posted a long account accusing Than Toe Aung of lying. They wrote that Than Toe Aung’s father had told them that he “has a history of occasionally going crazy” and called attention to his Muslim identity. They also doxxed him by posting his ID number and his family’s home address.

“If someone racist wanted to kill me, they can just kill me.” Than Toe Aung said.

Fearing for his parents’ safety, Than Toe Aung decided to move his parents in with relatives in a nearby town. He slept on friends’ couches. His mom was completely distraught and it hurt Than Toe Aung to see his mother like that.

“Her eyes were dark," he said. "I’m quite sure that she hasn't slept for days.”

Days later, the police took down the post. The Kyauktada police chief denies making the post, even though screenshots of the post were published by local news outlets.

“I do not think they will apologize for these actions either so I don't think I've gotten justice. But I think technology, social media, gives normal citizens power as a tool to advocate for justice.”

Facebook opened a new world of slam poetry to Than Toe Aung and to poets in Myanmar — Buddhist and Muslim alike — inspiring them to take the stage and speak out against injustice.

His encounter with the police and subsequent Facebook conflicts with them meant Than Toe Aung had to put his poetry on hold for nearly a year. But now he’s back on stage and his slam poetry group reunited last month. Than Toe Aung performed a live poem about mental health by American Poet Neil Hilborn.

When the poet Porsha Olayiwola found out about the impact her “Angry Black Woman” poem made on Than Toe Aung that reached him all the way from Boston to Myanmar, she was surprised.

“I can't believe somebody so far away could connect with my work on that level and see me,” she said. Than Toe Aung’s story was painful to hear. “It’s sad. It’s angering that a person can’t exist. Simply exist,” said Olayiwola.

Than Toe Aung can relate. He says racism in Myanmar is so extreme, he sometimes doubts how poetry can make a real difference. Like it’s just a drop in the bucket. Olayiwola’s only advice to Than Toe Aung is to build community. Because when small drops join together, they turn into a big drop. Those drops, she says, can be revolutionary.

This project was supported by the Pulitzer Center on Crisis Reporting.