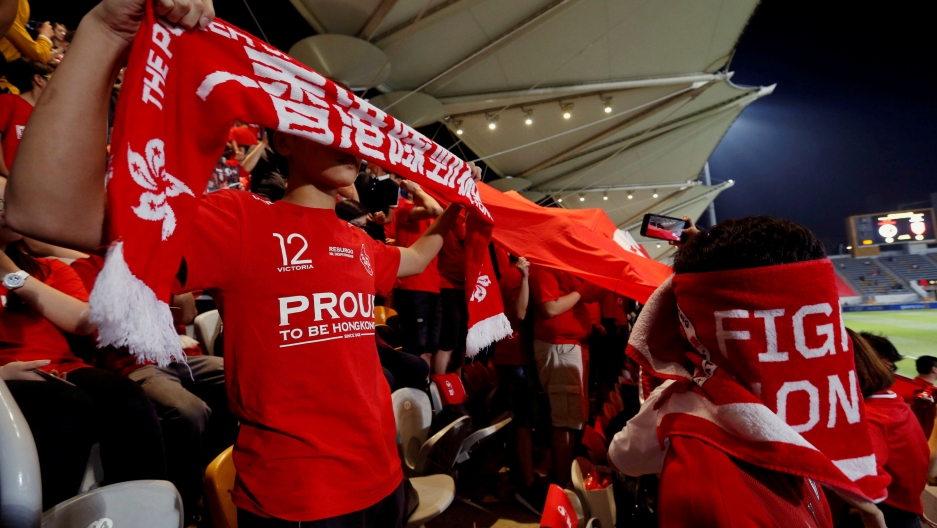 Hong Kong fans cover their faces and boo during the Chinese national anthem at a friendly soccer match between Hong Kong and Bahrain in Hong Kong, China, Nov. 9, 2017.

The national anthem is something that lots of people have strong feelings about.

Jimmy Buffett found that out on Sunday when he sang the anthem ahead of the National Football Conference (NFC) Championship Game in New Orleans. Buffett was mocked on social media, and not only for his mic drop at the conclusion of his performance.

But no one is seriously suggesting that Buffett be thrown in jail for his parrot-head version of "The Star Spangled Banner." Nor is anyone saying the singer ought to be deported, which is what President Donald Trump appeared to suggest last year about professional football players who took a knee during the anthem.

There’s a very different story playing out in Hong Kong, the former British colony that went back to China’s direct control in 1997.

Hong Kongers found guilty of disrespecting China’s national anthem could soon face up to three years in jail and a $6,000 fine.

China’s national anthem is titled, “March of the Volunteers,” and begins with the line, “Arise, we who refuse to be slaves!” Here’s an official video posted to a Chinese government web page.

But here’s a scene that has played out at soccer games in Hong Kong. It shows fans in the crowd turning their backs and booing during the Chinese national anthem.

It’s a pretty clear signal of disrespect, for sure. But in Hong Kong, freedom of speech is supposed to be protected.

A proposed law introduced Wednesday in the Hong Kong legislature would criminalize this sort of behavior. The process might take months, but the bill is expected to pass because pro-Beijing lawmakers are in firm control of the Hong Kong government.

“You can always express a lot of different opinion against the government,” said Holden Chow in an interview with the BBC. “It won’t get you into any trouble here in Hong Kong, because we have the freedom of speech.”

Chow is vice chairman of the Democratic Alliance for the Betterment and Progress of Hong Kong, the largest Beijing loyalist party in the Chinese territory. He says the national anthem bill simply works like this.

“We are not compelling people to respect [the anthem]; all we do is deter people from showing disrespect,” Chow explained.

Many Hong Kongers see the proposed law very differently. They say it’s too vague and represents yet another attack by Beijing on the idea of “one country, two systems.”

A small group of pro-democracy activists on Wednesday sprinted into the courtyard of a Chinese government building in central Hong Kong and put up a black banner that said in Chinese, “The freedom not to praise.” The banner was taken down by police after about five minutes.

Wednesday’s protest was organized by Demosistō, a pro-democracy activist party. Joshua Wong is the secretary-general of the group. In 2014, Wong became internationally known as a student leader of the so-called umbrella movement protests. He is facing criminal charges for his political activities.

Wong says more demonstrations against the proposed national anthem law are planned for the coming months.

“No matter what happens, we will continue actions to raise people’s awareness,” Wong told the Hong Kong Free Press. “There’s no reason for us to respect the regime, especially the Communist Party of China,” he said.

The message from Wong and like-minded Hong Kongers is that respect is something to be earned, not enforced by China.

“What Beijing has done in the aftermath of those protests is to double down on its violations of ‘one country, two systems,’” Carrico said. China is “attempting to exercise complete control over Hong Kong society, and make the vibrancy and diversity of political debate in Hong Kong illegal.”

The idea for a law protecting the national anthem was created in China, but with Hong Kong in mind, Carrico says. Still, the highest profile case so far played out on the mainland.

Last October, a 20-year-old internet celebrity with millions of followers got into trouble with the Shanghai police for livestreaming this video.

In the video, Yang Kaili sings a line from China’s national anthem while waving her arms around a bit like a music conductor.

On the scale of disrespect, it was pretty tame. But the video landed Yang in police detention for five days. Her internet channel was taken down, and she issued a public apology.

“The anthem is sacred, and my behavior hurt everyone’s feelings,” Yang said.

In Hong Kong today, Joshua Wong said the national anthem bill that was tabled in the legislature is really about stifling dissent.

Not far from where Wong was speaking, a group of pro-Beijing lawmakers took part in a rally of their own. They held signs and Chinese flags and said the proposed law is necessary for Hong Kong to protect the solemnity of China’s national anthem.