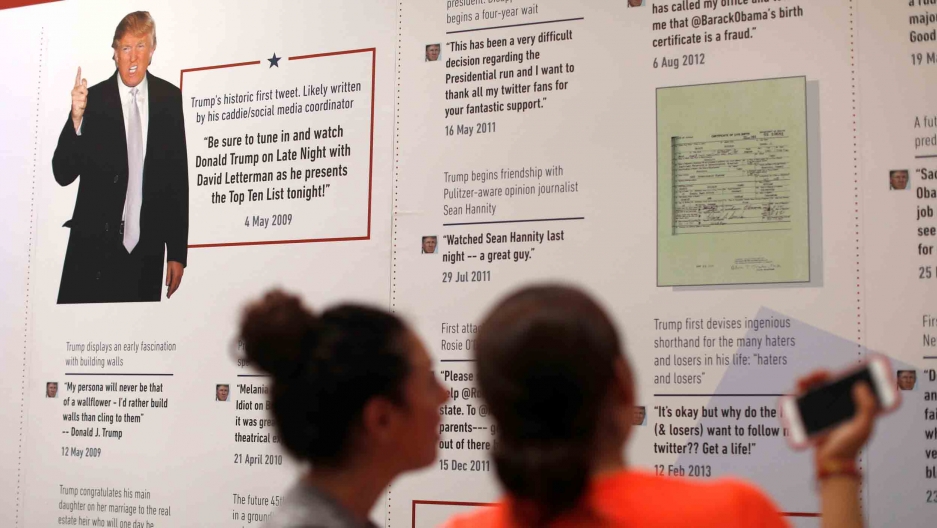 Visitors looks at tweets at The Donald J. Trump Presidential Twitter Library presented by The Daily Show in West Hollywood, California, in June 2018.

Throughout his presidency, President Donald Trump has taken to Twitter with his spin on every twist and turn. So it might be tempting to believe that the relationship between technology and politics in our country’s history had never been this dysfunctional before.

Not quite so, if you consider the arguments of Jill Lepore, a professor of American history at Harvard University who, not surprisingly, takes the long view. Our political and communication systems have seen consistent cycles of utopian and dystopian visions around technology, she says and that is the consequence of too much “faith in technological change to fix political problems,” dating all the way back to the very founding of the country.

According to Lepore, the author of “These Truths: A History of the United States,” the framers of the Constitution thought of the document itself as a machine designed for ultimate political performance, “that would go on and on and on indefinitely, without breaking down.”

Abolitionist Frederick Douglass had high hopes for steamships and telegraphs in the mid-19th century. He also had great faith in photography as a democratic art form with the potential to “help end slavery,” according to Lepore.

Furthermore, Douglass thought photography could end racial discrimination because, “if people could be depicted accurately and not in racist caricatures, nobody could believe the lie of racism,” she says. Lepore now sees echoes of Douglass’ beliefs in the struggles of the activist movement, Black Lives Matter.

As new technologies rolled on to the scene, including radio and television, Lepore says that standards were introduced to require balanced coverage of different political views, but these were eventually tossed aside. She points to the Fairness Doctrine established by the Federal Communications Commission in 1949, and later repealed during President Ronald Reagan’s administration. More deregulation followed in 1996 when President Bill Clinton signed the Telecommunications Act.

Subsequent debate about how best to keep our inventions in check have often come too late, Lepore argues, and she has a theory about why that is. It involves what she calls “the mad scientist.” It is not a term of endearment.

Related: Lawmakers want to know about Facebook's operations beyond the US

“It’s whatever thing we have thought was so great and gonna save the world and when we find out it’s not going to save the world, then we start having ethical conversations.”

Will those ethical conversations, and hopes of healing our divisions, become more difficult, now that we all inhabit our own technological bubbles, fueled by Facebook, Twitter, and cable news? Lepore doesn’t offer any predictions but with history as our guide, it doesn’t look so good.