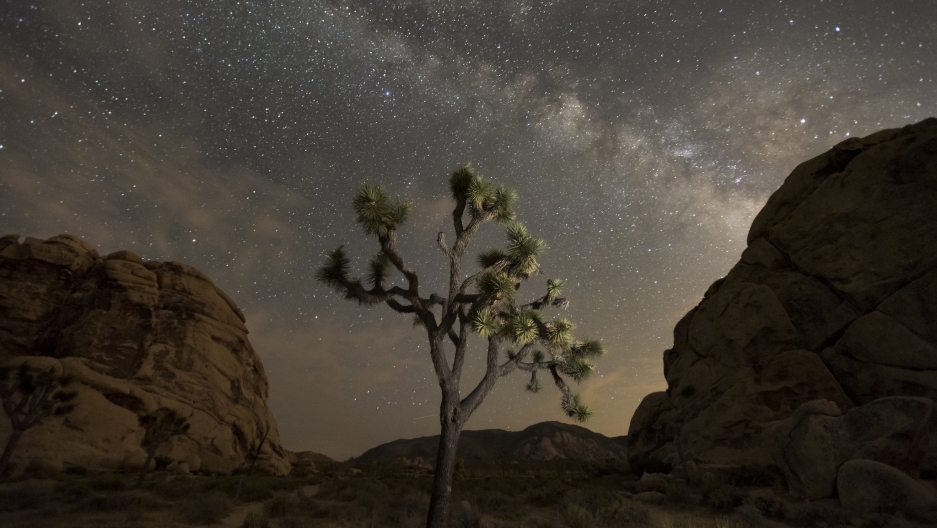 The night sky at Joshua Tree National Park in southern California. Staff at the park are furloughed during the current government shutdown. The park had remained open, but temporarily closed after damage to its trees and trails from unsupervised visitors.

When the United States government began a partial shutdown on Dec. 22, 2018, many national parks were left open without adequate personnel.

All across the country, facilities on public lands and at national monuments are critically understaffed when furloughed employees stay home, which leads to a host of problems: overflowing trash cans, illegal off-road driving, poaching of animals and plants, and theft of artifacts, as well as safety risks for park visitors.

Former Secretary of the Interior Sally Jewell experienced a government shutdown when she worked in the Obama administration. At that time, parks and monuments closed to protect them from harm. She calls the Trump administration’s decision to keep them open “incredibly unwise.”

“It leaves the assets that remind us of our history and our past vulnerable to vandalism, souvenir taking and bad action,” Jewell says. “The number of law enforcement people that are still on staff can't possibly be the eyes and ears that the National Mall or other parks need to make sure that these places are protected.”

The Interior Department is responsible for more than 400 sites, including national parks and historic buildings and structures. Other conservation areas, including the National Forest system, are run by the Department of Agriculture. Jewell says that department is also facing problems.

“I’m really feeling sick about the message the shutdown sends to the men and women who work for the federal government about their value.

Related: What’s the economic impact of a government shutdown?

“The campgrounds are not getting service, the restrooms aren't getting cleaned; people will get lost on the trails, dogs are going off leash in areas where that's not allowed, which impacts wildlife,” she says. “So, really, it's very much the same situation for the US Forest Service as it is for the National Park Service and the Bureau of Land Management and other agencies that oversee public lands. They all have vulnerabilities and they're all being impacted."

Without appropriate staff in place, poachers can more easily take plants or animals from the parks, which undermines the overall ecosystem and the sustainable use of those products within the ecosystems, Jewell says. At Joshua Tree National Park, for example, trees have been cut down and visitors have driven their vehicles off-road, inflicting permanent damage on the sensitive cryptobiotic crust. “It will stay with those imprints of tires or footprints for hundreds of years,” Jewell says. “These are the kinds of things that people may or may not recognize, but that damage is being done right now.”

During the 2013 shutdown, people poached old growth trees from Olympic National Park. It’s difficult enough to police this type of activity with full staffing, Jewell says, so “there’s no possible way that people can police something like that with limited capacity. This is, I'm sure, happening throughout our national forests and our national parks right now.”

The shutdown does not just increase the risk to assets the park protects and to the people who visit them, Jewell adds. It also causes a break in the collection of data for much of the science that takes place in the parks. Some of this loss of data could have profound effects on research results.

But perhaps the biggest long-term impact of the shutdown is on the morale of the employees — the fact that when they eventually go back to work, they will be faced with cleaning up the mess.

“When your career has been built around protecting these resources, understanding them, removing invasive species and educating people who come and visit, to come back multiple weeks later after a shutdown and to be faced with the visual and the olfactory [effects] and the deep, personal sense of offense you would feel when you walk in there — it is just demoralizing,” Jewell says. “We need people to want to be public servants, to be appreciated for being public servants. That is hard to quantify but very, very damaging with a shutdown of this nature.”

Jewell says that during her time at Interior, she saw how deeply people cared about public lands — and this sentiment occurred across the political spectrum. “They want to see these place preserved and protected, not just for now, but for the generations to follow,” Jewell says.