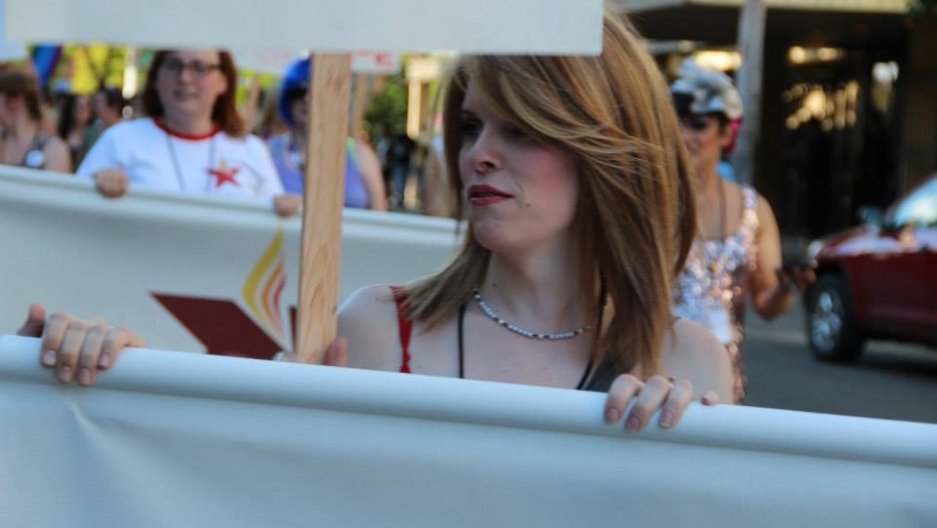 Danni Askini knew she had a dangerous job as the founder of a Gender Justice League, a transgender rights advocacy organization in Seattle, Washington. She’s a transgender woman and is used to occasional threats.

But after she and others sued the Trump administration over its transgender military ban, the threats became constant and specific, Askini says.

“People telling me that they were going to kill my mother,” she says. “Somebody had stalked and figured out my brother’s address, what bus stop he used, and where he worked, and threatened to kill my brother.”

And then one day, when she was driving alone, a green truck with two men in it ran Askini off the road.

“Basically they ran me into a guardrail,” she says.

The men in the truck stopped, yelled specific threats about her being transgender, and drove off. She says police decided it was road rage and didn’t file a report. The Seattle Police Department didn’t respond for requests for confirmation or comment. Askini asked federal authorities for help — they had been responsive in the past and had even helped train her staff at Gender Justice League in security measures.

“This is the first time where they declined to really help,” she says.

At that point Askini and her family decided she needed to leave the country. But when she tried to renew her passport, she says officials told her that she had obtained it fraudulently because she didn’t provide documentation including her gender at birth. A State Department official says there has been no policy change in regard to transgender applicants, and, although they can’t comment on any individual’s application or circumstances, they are committed to treating all passport applicants fairly and with respect, including transgender individuals.

Askini's congresswoman, Democrat Pramila Jayapal, intervened to get Askini a temporary passport. Askini went to Sweden, where her ex-husband lives.

Six months later, she’s still there. Her Swedish visa is about to expire. And she can’t come back to the US.

“I don’t have a US passport, I cannot leave the state of Sweden and I don’t have Swedish citizenship,” she says.

Askini turned to international authorities for help, filing a human rights complaint with the United Nations. But the State Department won’t respond to the UN’s requests to investigate.

“I just thought they were being silent on my issue,” Askini says.

But as it turns out, the US State Department hasn’t responded to requests from the UN to investigate human rights complaints since May, according to a report in The Guardian. Thirteen requests haven’t been answered, including one asking to look into family separations at the US-Mexico border. That’s a departure from previous administrations.

International NGOs including Amnesty International have written an open letter to Secretary of State Mike Pompeo, voicing their concern. A UN spokeswoman says they haven’t been advised of a policy change and they hope that the US will continue to cooperate. Requests for comment to the State Department, FBI and Department of Justice went unanswered, possibly because of the government shutdown.

Related: President Trump, what is your administration’s commitment to human rights?

“The question is this: Is it something that is explicitly a deliberate policy decision, or is there so much turmoil and uncertainty regarding the leadership that there was a conscious decision not to answer anything at all?” says Steven Feldstein, a Boise State University Professor and nonresident fellow at the Carnegie Endowment for International Peace. “I would say probably closer to the former.”

During Barack Obama's administration, Feldstein was a deputy assistant secretary in the Democracy, Human Rights and Labor Bureau of the US Department of State. He says responding to UN requests to investigate was routine. The US hosted 16 UN investigations while Obama was in office.

“It wouldn’t even be an issue where there would need to be senior level meeting to say, ‘How do we respond and should we,’” Feldstein says. “It would be more of a de facto, ‘Yes we’re going to respond,’ and then the question would be who would be willing to meet with them and how would they schedule things.”

They expected critical feedback from those investigations and, even though the findings are non-binding, Felstein says they took them seriously.

But the Trump administration has rejected international oversight.

The last UN investigation in America, which was approved by the Obama administration, came out in May 2018. It concluded the US was turning a blind eye to 40 million people in poverty in the country. Then-UN Ambassador Nikki Haley responded that it was “patently ridiculous” to investigate poverty in America, compared to other countries across the world.

President Donald Trump summed up the administration’s stance while speaking to the UN in September, “America is governed by Americans,” he said. “We reject the ideology of globalism, and we embrace the doctrine of patriotism.”

Mark Lagon, a professor at Georgetown University’s School of Foreign Service, says this most recent move away from the UN — not responding to requests for investigations — breaks with recent Republican administrations, even those that were skeptical toward the UN. Lagon served as US Ambassador-at-Large and was a senior official on human rights and UN policy in the George W. Bush administration.

“It’s not in vogue today to be open to criticism by the UN, and that hasn’t been an uncommon view among conservatives over time,” he says.

But the Bush administration allowed UN investigations, even on uncomfortable subjects like detentions at Guantanamo, although in that case the administration rejected the UN’s findings.

The Trump administration has claimed a continued commitment to human rights, though it pulled out of the UN Human Rights Council last year. Vice President Mike Pence has spoken out against the persecution of Uighurs in China. But Danni Askini says they’re not protecting human rights workers in their own country.

“This administration has just gutted protection for human rights defenders doing LGBT work, and I happen to just be one of the canaries in the coal mine,” she says. “I’m being attacked because of the political work that I do. Not just because I’m transgender. ...  And I think it has broader implications for a lot of people who oppose Trump.”

Askini feels safe in Sweden. She says being transgender isn’t a big deal there. She’s applied for asylum, but she doubts it’ll be granted to an American citizen.