For the past 15 months, a Mennonite church in Columbus, Ohio, has offered sanctuary to an undocumented immigrant mother from Mexico who sought to avoid deportation. Halfway across the world, in the Netherlands, a Protestant church has held services round-the-clock since October to protect an Armenian family from deportation after they've exhausted all legal remedies.

So, when a parishioner from Columbus Mennonite Church heard The World’s story on the Netherlands congregation last month, it sounded familiar. The Columbus church immediately reached out to the Bethel Chapel in The Hague.

That’s how Columbus Pastor Joel Miller ended up in the Netherlands delivering a sermon Monday.

Related: They took sanctuary in a Connecticut church — but did not hide from immigration officers

“It sounded very familiar in many ways. There was an instant connection with it because of our sanctuary work,” Miller said of The World’s initial story. “This is an international connection with similar kind of work protecting people who are [seeking] asylum. So, we just talked about the similarities and the possibility of us coming to participate in this.”

Bethel Chapel invited Miller to join them. And a parishioner in Columbus donated his frequent flyer miles to send Miller there along with Austin Mccabe Juhnke, another parishioner who coordinates the church’s sanctuary efforts.

In honor of the United States’ holiday honoring Martin Luther King Jr., Miller led a group at Bethel in singing, “We shall overcome” and read the civil rights icon’s 1963 letter from Birmingham jail, where, among other things, he called on white churches to stand up for black people’s rights. King’s eerily prescient words boomed inside the small Dutch chapel.

One passage stood out, Miller said.

“Injustice anywhere is a threat to justice everywhere,” King wrote decades ago. “We are caught in an inescapable network of mutuality, tied in a single garment of destiny. Whatever affects one directly, affects all indirectly.”

“Injustice anywhere is a threat to justice everywhere,” King wrote decades ago. “We are caught in an inescapable network of mutuality, tied in a single garment of destiny. Whatever affects one directly, affects all indirectly.”

“That line takes on a whole new meaning when you’re reading it in the Netherlands, and when you’re thinking about this work of asylum as an international effort of like-minded spirits,” Miller said afterward. “Martin Luther King also says about the church, we’re ‘small in number but big in commitment.’ It’s about the oversized impact of what we’re doing. It’s such a powerful, beautiful expression of solidarity and humanity.”

Under an obscure Dutch law, immigration authorities may not enter a church while a service is ongoing. That’s why they have been unable to arrest the Tamrazyans, an Armenian family of five who have lived in the Netherlands for the past nine years and have a final deportation order. They speak Dutch and consider the country their home. The father fled Armenia for political reasons that have been kept private because it could endanger them if they end up deported, says Florine Kuethe, a Dutch public relations consultant who is assisting the church with media interest around the case. 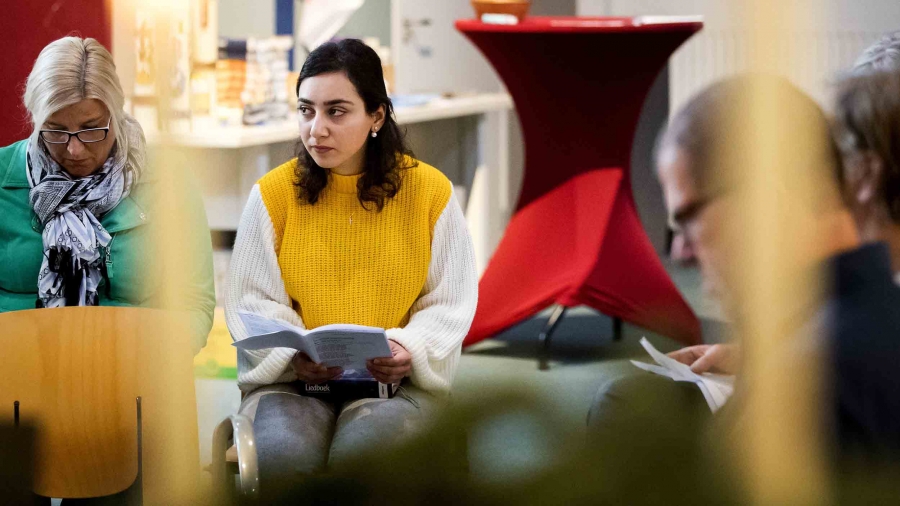 Hayarpi Tamrazyan, center, from Armenia, attends a service in the Bethel church in The Hague, eastern Netherlands, on Dec. 6, 2018. The church has been holding round-the-clock religious services for three months to prevent the family from being deported. There is a loophole in Dutch law which says that police cannot enter the premises while a religious service is underway.

The 24/7 church services are essentially a filibuster. A rotating cast of more than 800 clergy members from dozens of denominations have taken turns leading the service — an effort Bethel Chapel volunteered to coordinate. As part of the symbolism of a service that never stops, pastors pass a continuously burning candle to each other between shifts.

“We’ve had preachers from Germany, Switzerland and Belgium,” Kuethe said. “But just the distance makes Ohio even more special. And the fact that they are doing the same thing.”

Related: Round-the-clock services at a Dutch church may protect Armenian family from deportation

Since Oct. 2, 2017, the Columbus church has sheltered Edith Espinal, an immigrant activist and Mexican mother of three who faces a final deportation order. She has lived in the US for 20 years. Two of her children are US citizens, while the asylum cases of her oldest child and husband are still pending. Espinal lives in the church alone, though her husband and children stay with her some nights.

“A lot of the work of our community of organizers has been trying to get elected officials to use their power and voice to get some form of protective discretion to allow her to stay at home while she pursues her case,” McCabe Juhnke explained. “Her lawyer is trying to get her asylum case reopened.”

Columbus Mennonite is a mostly white congregation of about 200 people. It’s one of several places of worship across America hosting roughly 50 undocumented immigrant individuals and families, according to Church World Service. It’s part of a growing “sanctuary” movement that began decades ago that has gained popularity as US President Donald Trump has made all undocumented immigrants — not just those with criminal histories — targets for deportation.

Related: They took sanctuary in a Connecticut church — but not to hide from immigration officers

Sanctuary churches are not as common elsewhere in the world, and in the Netherlands, they’re rare. Though Dutch places of worship have occasionally protected immigrants within their walls over the years, this is believed to be the first time a continuous service has been organized to stave off authorities, Kuethe says. 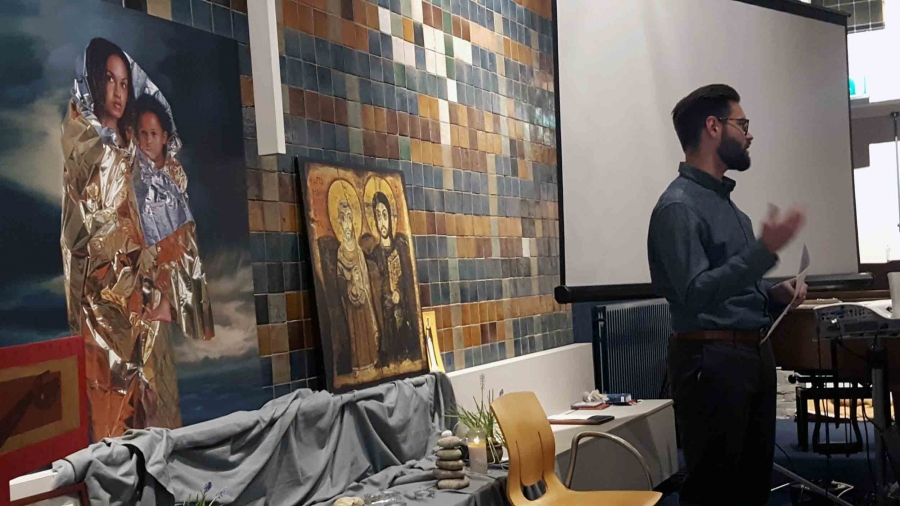 Parishioner Austin McCabe Juhnke stands at the front of the Bethel Chapel in The Hague. Behind him is a picture of the Madonna with child who look like Africans migrants wrapped in thermal blankets worn by people rescued at sea.

And at nearly three months, it may even be the longest-running church service ever, anywhere in the world. (Bethel church thinks they have may have set a record, but between coordinating pastor shifts they haven’t had time to call Guinness World Records to check.)

The Tamrazyans’ case dragged on for six years, during which courts have twice ruled in their favor, though the government won a favorable ruling in its third attempt to remove them. The threat of deportation is very real. The same day Miller delivered his sermon, the Netherlands deported another Armenian family with three children under 8 years old. There’s a glimmer of hope in the Dutch government’s early discussion of a measure that could protect from deportation immigrant children who have spent more than five continuous years living in the Netherlands.

But day-to-day, the Tamrazyan family — which includes two daughters, Haryarpi, 21, Warduhi, 19, and a son, Seyran, 15 — tries to find some semblance of normalcy. They cannot leave the church grounds, so they stay in small living quarters connected to the chapel. The kids study textbooks and do homework even though they cannot attend classes. Hayarpi studies econometrics, Warduhi studies fashion and design, and Seyran likes to play soccer — though there’s little space for that anymore in the small churchyard.

Espinal lives a similar, parallel life in Columbus. Congregants have organized fundraisers to support her, and she routinely speaks to groups of activists and politicians.

Back in The Hague, the Tamrazyans sometimes attend services, and they’ve gotten to know several of the dozens of people who file in and out each day to support them. Anywhere from two to 20 supporters sit in the church at any given moment.

“They get 100 emails a day from people saying, ‘We’re praying for you, we support you, we hope your case gets resolved soon’,” Miller said Monday after sharing dinner with the Tamrazyans. “That’s very meaningful for them.”

Still, the family’s situation weighs heavily on the parents, who have also not been named for their protection. The father is particularly affected, Miller said, as is Espinal in Columbus.

“I think he feels deep gratitude and hope in the community of support but also very deep sadness and sense of despair at his own situation,” Miller said. “That’s something I experience when Edith talks to groups. And this is what gives her the strength to go on in the everyday grind of living under a kind of house arrest in our church.”