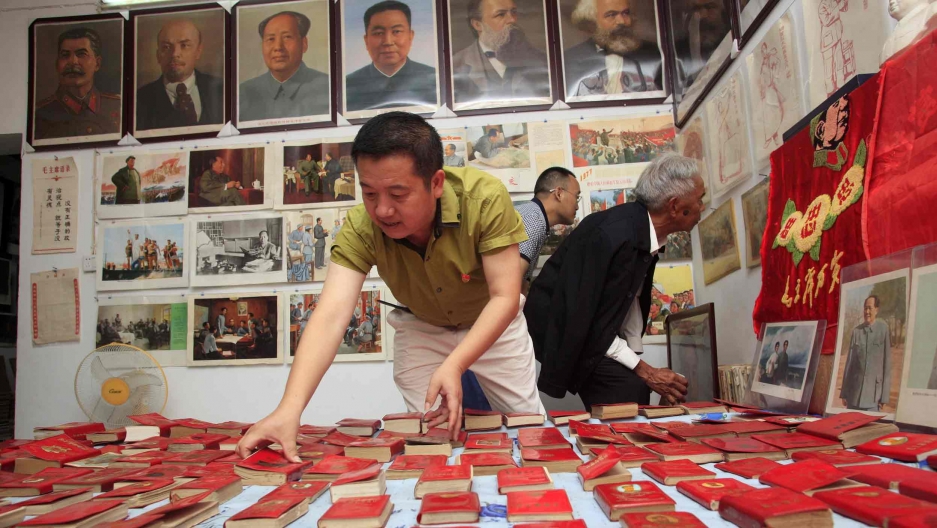 A man arranges his collections of Chairman Mao's "Little Red Book" at a "red museum" he built on the second floor of his home in Yichang, Hubei Province, China. The iconic "Little Red Book" contained quotes from Mao. A new "Little Yellow Book" has done the same thing with quotes from China's President Xi Jinping.

"We do not want to introduce trouble, but we are not afraid to get involved in trouble."

This is one of 300 quotations collected in "The Little Yellow Book: Quotations from Chairman Xi Dada," a new book cataloging sayings pulled from the speeches and press interviews of Chinese President Xi Jinping.

The yellow book was inspired in part by Chairman Mao Zedong's "Little Red Book," which was first published in 1964 and included quotes from Mao that were meant to be simple ideas that anyone could read. The same is true of "The Little Yellow Book." Except the book — which is curated by a Chinese author in exile — is unauthorized, funny, and a window into China's leader.

In the foreword, author and curator Julie O'Yang writes, "The purpose of this book is to distill the huge volumes of Xi Jinping Thought and pen it into a small booklet that even a semi-literate could read, memorize, or set to music. Like its famous predecessor, the Little Red Book, the quotes are plucked out of context and strung together without much regard for chronology."

"In the West you have the notion that if somebody hits you on the left cheek, you turn the other cheek. In our culture, we punch back."

The quotes are arranged in 29 different chapters, ranging from "Socialism with Chinese Characteristics" to "One China." It also addresses cultural themes like "Internet and Big Data" and "Media."

The World's Marco Werman spoke to one of the book's curators, Julie O'Yang, about the project.

The World: It's not "a little red book" — Mao already had taken red. Why yellow?

Julie O'Yang: Yellow because it's a new time, it's a new era. Chairman Xi Dada has said when he received Trump last year in the Forbidden City he said, "We have yellow skin, we have dark hair, we are descendants of the dragon," which means he thinks yellow is a proud color. That's why.

Somebody on Chinese social media channel tried to market him, to brand this new fatherly image out of the blue! He said, "Xi Dada, what are you up to now?" So that became very popular. And then, afterward, the Chinese Communist Party took over that name, and they became more and more popular every day because the pop scene some writers did a few very popular songs. And it took off.

So if you were to refer to Xi Jinping as Dada in China, that's OK? Nobody would throw you in jail?

I also think about your own work as an artist. Dada, of course, is a great absurdist artistic movement. Are you a Dadaist?

"I want to press the 'like' button for our great Chinese people."

Julie, collectively, all these quotations represent not just Xi Jinping as a leader, but also China, its people and society. And Xi Jinping is nothing if not a booster for his vision of a perfect China. What was your aim of this book, of pulling together these quotations from Xi Jinping?

We started, me and my collaborator, Fernando Eloy, we started talking when Xi Dada took away the term limits. Last year that's when we started to talk about this idea, this crazy idea, to make a book about him because we were joking that he had the ambition to take over the position of Mao Zedong.

"Sink our teeth in the hard bone, show our courage and guts to press ahead and take reform forward."

Andy Warhol was curious about China. He famously visited the country in 1982 and said at the time that the way to understand China best is through Mao's Little Red Book. So if you take that quotation we just heard from Xi Jinping about sinking our teeth in the hard bone, what can we learn today from these quotations about the new China? Would Warhol say these quotations are just as revealing?

I think he would have said that, because the reason why he also appreciated The Little Red Book is because it's so simple and it's so accessible. And it makes you think, and you can interpret it, you can discuss things — it's a great, great opening. I think that quote is very revealing in a sense that we know Chinese are very hard-working people, and he's pushing forward that image, plus some socialism with Chinese characteristics. That is the heart of his philosophy.

"I have watched 'Deer Hunter' and 'The French Lieutenant's Woman' starring Meryl Streep. And 'The Godfather.'"

Finally, we learn from one quote that Xi Jinping is a fan of Hollywood, especially World War II movies and "The Godfather."

So, Julie, is it that moment from the film (see clip above) that made an impression on Xi Jinping, do you think?

You have to understand that he belongs to the elite class. From that position, and he has understood power.

Yeah, and he has consolidated his power and ended the term limits last year. Should we be worried?

I'm not on the inside of the Communist Party — I have left China more than 20 years ago — and I have remained a close observer. I think there are a lot of political struggles going on between different cliques, which has always been the case. So I hope that, you know, those internal struggles will keep things in balance somehow. But I don't know. I'm holding my breath.

"Internet can destroy our party and our country."

As a former Dadist, Julie, was compiling this book of Xi's quotations, an exercise in absurdity?

Well, as an artist, I see it, of course. It's a kind of gadget or object I'm making. I want to make people think, so it's got to be a little bit absurd because otherwise you can't break through the wall and you are going to go into the routine of academic work. So, yeah, it's not a common take.

"Fight tigers as well as flies."