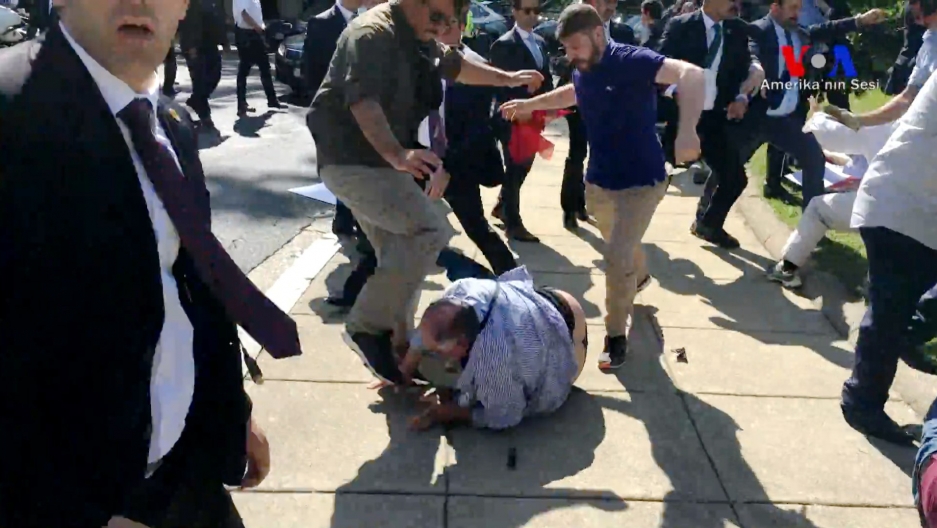 Protesters and supporters of Turkey's President Recep Tayyip Erdoğan clashed outside the Turkish ambassador's residence May 16, 2017, in Washington, DC.

Critics of Turkish President Recep Tayyip Erdoğan often point to a day back in May 2017 as an example of how the president deals with those who oppose him.

On May 17, 2017, President Donald Trump welcomed Erdoğan to the White House and lauded him as a great ally in the fight against extremism. Down the street, Kurdish anti-Erdoğan protesters were attacked by Turkish security officials and supporters. Eleven people were injured and nine were taken to the hospital.

Fifteen of the Turkish president's security guards were indicted after the incident but most of them eventually had their charges dropped.

It's infuriating to people like Murat Yasa, a Kurdish activist from Turkey who was there protesting against Erdoğan and was injured in the brawl. He and a Yazidi woman he was standing next to were among those who got roughed up pretty badly.

Now he and several others are suing the Turkish government for their injuries.

Marco asked Jasa what it was like that day, outside the residence of the Turkish ambassador in Washington, DC.

Murat Yasa: We were there protesting Erdoğan and all of a sudden we heard a noise. Then later, I find out that Mr. Erdoğan, he arrived at the embassy and then all of a sudden the Erdoğan supporters, and Erdoğan's bodyguards and the embassy's bodyguards, they attacked us. All of them, from left to right. There was a woman, her name is Lucy. So, they attacked us, she fell down and they kicked her. I tried to save her, I tried to save her. And then all of a sudden someone hit me [from] behind and I fell down. And then, one after another, they were kicking me. Each time I was trying to get up. One after another, one after another, every 10 seconds, every 15 seconds, they were hitting me like the soccer players kick a ball. And I understood that I am not going to be able to get up. And I tried to save my head with my hands.

Marco Werman: And Murat, you said this incident has had some long-term impacts on your health and your life.

Yes, sir. It is more than a year now and I am still seeing my neurologist, my psychiatrist, I have some damage on my head because of the kicking on my head. I have headaches, I had broken teeth. Those are fixed. I still have headaches. And then, I cannot sleep so I have medicine to go to sleep. The doctors says I have "PS" ... something. I have memory problems ...

Are the doctors talking about PTSD? Post Traumatic Stress Disorder?

What do you do professionally and has this episode affected your work?

I have a flooring business for carpeting, hardwood, that kind of business. And we have to, every other year, take an exam to renew our license. I'm in this business 25 years and I couldn't pass it for the first time in my life because I don't remember all those numbers. I don't remember all the information. So, I lost my license and my business. And then, of course, it affects my finances too.

Like many people, I've seen the video of this fight outside the Turkish embassy and in the chaos, it's reasonable to conclude that the Washington, DC, police didn't know who to protect after a certain point. What happened to the Yazidi woman who was attacked?

The Yazidi woman, she's still seeing her doctors too and therapy, seeing the psychiatrist too. She's got the same problem I have — memory and PTSD.

Related: Turkey jails more journalists than any other nation. Those in detention are all terrorists, Erdoğansays.

The Turkish government has denied any wrongdoing here but you and fellow victims have filed a lawsuit in US federal court against Turkey. What is the case you and your lawyer are making?

We believe that justice must be served. That's the main reason we are suing them.

Have you heard anything, Mr. Jasa, from Turkish officials since you went public with your story and filed this lawsuit?

I have no connection whatsoever. I don't go to Turkish embassy. I have a right to vote. I don't even vote because I am scared of my life.

How has this changed your own relationship with Turkey?

My wife, my daughter, my son, they used to go every year or every other year to Turkey. Since then, they cannot go because they're afraid ... I don't even want to call my relatives in Turkey because I'm worried about the safeness.

Editor's note: The World reached out to the Turkish Embassy for comment and heard back in an email. It said Murat Yasa's claims are "baseless" and "distort the facts and manipulate public opinion." The whole incident, the statement said, was the result of "poor planning and execution of a security plan by US officials."