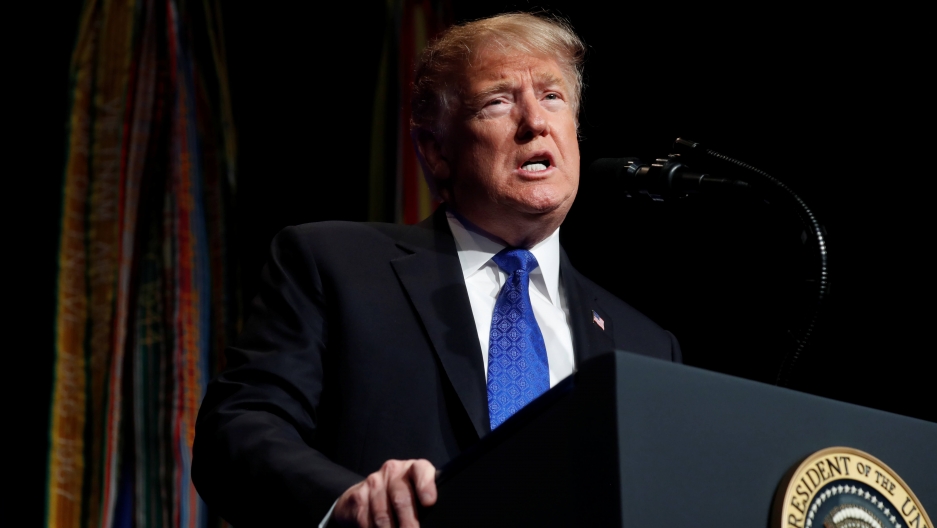 US President Donald Trump speaks during the Missile Defense Review announcement at the Pentagon in Arlington, Virginia, US, Jan. 17, 2019.

President Donald Trump unveiled a revamped US missile defense strategy on Thursday that called North Korea an ongoing and "extraordinary threat," seven months after he declared the threat posed by Pyongyang had been eliminated.

The plan, which also detailed concerns about the burgeoning capabilities of Iran, Russia and China, called for developing space-based sensors to detect incoming enemy missiles and exploring space-based weapons to shoot down missiles among other steps to shield the United States.

The open acknowledgment in the Missile Defense Review of US plans to counter Russian and Chinese technological advances likely will alarm those nations. It marked a departure from the approach taken by Republican Trump's Democratic predecessor, Barack Obama, to tamp down concerns by major nuclear powers about expanding US missile defenses.

"Our goal is simple: To ensure we can detect and destroy any missile launched against the United States — anywhere, anytime, anyplace," Trump said at the Pentagon.

Trump did not mention the North Korean missile threat in his remarks. But acting US Defense Secretary Patrick Shanahan called North Korea's missiles a "significant concern."

"While a possible new avenue to peace now exists with North Korea, it continues to pose an extraordinary threat and the United States must remain vigilant," the report said.

For Trump, who is trying to revive efforts to persuade North Korea to abandon its nuclear arsenal, the report's release came at an awkward moment. Senior North Korean envoy Kim Yong Chol was headed for Washington on Thursday for expected talks with Secretary of State Mike Pompeo on Friday and a possible encounter with Trump, a person familiar with the matter said.

The talks could lead to an announcement of plans for a second Trump summit with North Korean leader Kim Jong-un after their meeting last year in Singapore, the source told Reuters.

Trump wrote on Twitter after the June 2018 summit that there is "no longer a Nuclear Threat from North Korea."

It called for investments in space-based sensors that can better detect and track incoming missiles, and perhaps counter super-fast hypersonic technology, an area in which China has made major advances and Russia is actively working.

"The US will now adjust its posture to also defend against any missile strikes including cruise and hypersonic missiles," Trump said.

The document also pointed to projects by US defense industry giants including Raytheon Co, Lockheed Martin and Boeing Co.

"We are committed to establishing a missile-defense program that can shield every city in the United States. And we will never negotiate away our right to do this," Trump said.

A senior Russian legislator, Viktor Bondarev, said after Trump's announcement that the new US strategy would ramp up global tensions, according to Interfax news agency.

"Its desire to have a strategic counter to the United States could drive it to field an ICBM," the report said, referring to an intercontinental ballistic missile.

US officials have said American missile defenses are primarily designed to counter attacks from countries with more-limited arsenals like North Korea, which US intelligence officials believe is still advancing its nuclear program despite a halt to missile launches last year.

Pentagon officials contend that American missiles defenses are too few to effectively counter a major first-strike on the US homeland by an advanced nuclear power like Russia or China. Washington hopes those countries will instead be deterred from attacks by America's nuclear arsenal.