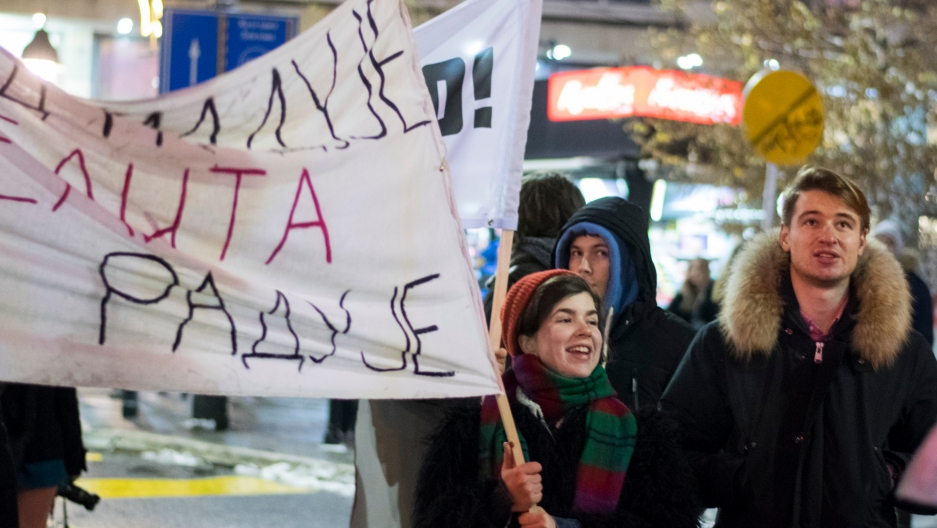 Protesters carry a banner reading “The people are hungry, the elite are happy” at anti-government demonstrations in Belgrade, Serbia, Jan. 12, 2019.

Thousands took to the streets of Belgrade and other Serbian cities on Jan. 13 for the sixth straight Saturday in a collective uprising against the government, low quality of life and lack of media freedom.

The protests kicked off on Dec. 8 after separate attacks on a prominent political opposition leader and a journalist.

On Nov. 23, in the central city of Kruševac, a group of men with steel bars attacked Borko Stefanović, president of the Serbian Left political party, and three other party members. Nearly a month later, on Dec. 11, in an apparently unrelated political attack, assailants threw Molotov cocktails and shot at the house of 70-year-old investigative journalist Milan Jovanović, who narrowly escaped.

Protests continued Wednesday with a silent vigil marking the assasination of Kosovo Serb politician Oliver Ivanović, who was killed on Jan. 16 last year.

While initially protesting the recent attacks, demonstrations across the country soon gained broader popular support. They have since grown into a wider display of opposition against President Aleksandar Vučić and his ruling Serbian Progressive Party, which dominates the Balkan country’s political landscape. In the 1990s, Vučić served as minister of information under President Slobodan Milošević, who was later tried by the International Criminal Tribunal for the former Yugoslavia for war crimes.

Vučić has since refashioned himself from an ultra-nationalist to a pro-Western populist conservative. He maintains friendly ties with the West and claims joining the European Union as his signature policy, but his increasingly authoritarian tendencies and close ties with Russian President Vladimir Putin, who was treated to a red-carpet welcome and mass rally as he visits Belgrade this week, have stirred anger and frustration among citizens.

“This is a civil movement, a civil uprising.”

On Saturday evening, thousands of people, young and old, many accompanied by young children or pet dogs, flooded the streets of central Belgrade. The atmosphere was jubilant and social. Protesters blew whistles or horns, chanted slogans, sang songs or quietly chatted.

“We thought about the violence in our country, violence in the media, discrimination,” said 24-year-old political science student Jelena Anasonović, one of the protest organizers. “That was the main reason to go to the streets.”

The organizers consist of a loose group of students and activists who began calling the protests “One of Five Million” (#1od5miliona) after Vučić said he wouldn’t meet their demands, even if the number of protestors reached five million. 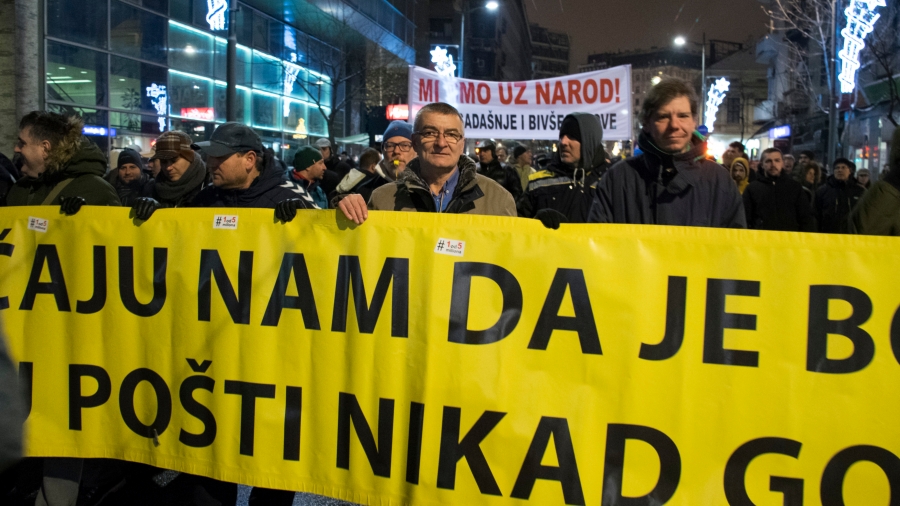 Trade union members carry a sign reading "They are telling us that it's better, but in the post it’s never been worse” at anti-government demonstrations in Belgrade, Serbia, Jan. 12, 2019.

Anasonović said the organizers are calling for press freedom and more media coverage of the protests and opposition politicians, an end to political violence, a proper investigation into the assassination of Ivanović, and more transparency over ongoing negotiations with Kosovo.

A deal to normalize Serbian relations with Kosovo is a prerequisite for both countries to join the EU. This has been a bitter sticking point since the dissolution of Yugoslavia and bloody regional wars. Kosovo, a former province of Serbia, declared independence in 2008, but international recognition of its sovereignty is mixed. Neither Serbia nor Russia acknowledges Kosovo's independence. An EU-mediated deal could involve a land swap and remains highly controversial.

Psychologist Jovana Vuković, 34, took to the streets on Saturday to express her anger against Vučić.

But for Vuković, like many of the protestors, anger at Vučić doesn’t necessarily mean support for any opposition politician.

“I’ve always voted against, rather than for someone," she said. "That’s very frustrating. At this point in time, I don’t think there’s a political party ready to take this country forward.”

“This is a civil movement, a civil uprising,” she said.

Tsarin joined the protests to show her discontent with the lack of media freedom — Serbia’s press freedom ranking on democracy watchdog Freedom House has plummeted under Vučić — and poor economic conditions. She said her pension, the equivalent of $422, isn't enough to cover her cost of living.

“[The government] is exploiting people … they’re supporting foreign investors instead of locals, and we’re a very poor country. We need a lot of local investment, local factories,” Tsarin explains. 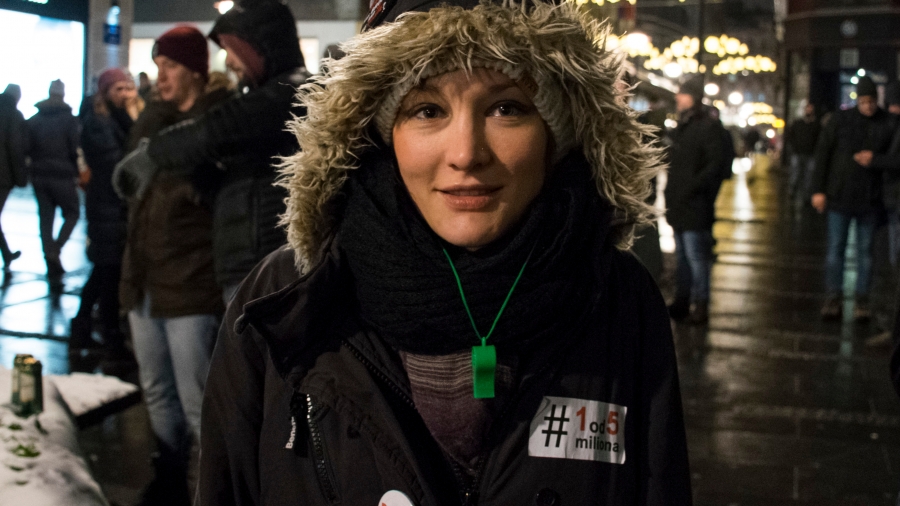 A 'crisis of democracy'

Nikola Burazer, program director at the Belgrade think tank Center for Contemporary Politics, said political change is unlikely as long as opposition to Vučić doesn’t translate into support for a clear alternative.

“You have this big paradox — people are unhappy, they go to the streets, they yell, they’re against this and that, but they’re simply unwilling to give their trust to anyone in the elections, and this means their entire effort is futile,” said Burazer.

Jasmin Mujanović, political scientist and author of “Hunger & Fury: The Crisis of Democracy in the Balkans,” said many people are frustrated with opposition parties in Serbia.

“The political opposition is fragmented, it’s fractured, it’s incredibly provincial in its perspectives. Many of them are about as corrupt — perhaps in some cases even more corrupt — than [the government],” he said. “Something that we might refer to as a genuinely progressive, reformist or liberal democratic opposition has not yet emerged.”

These demonstrations are the third wave of large anti-government protests in the last three years. In 2016, thousands protested against the controversial Belgrade Waterfront housing development plan, and in 2017, thousands more took to the streets after Vučić won the presidential elections, which were marred by SNS party domination of the media and claims of voter intimidation. 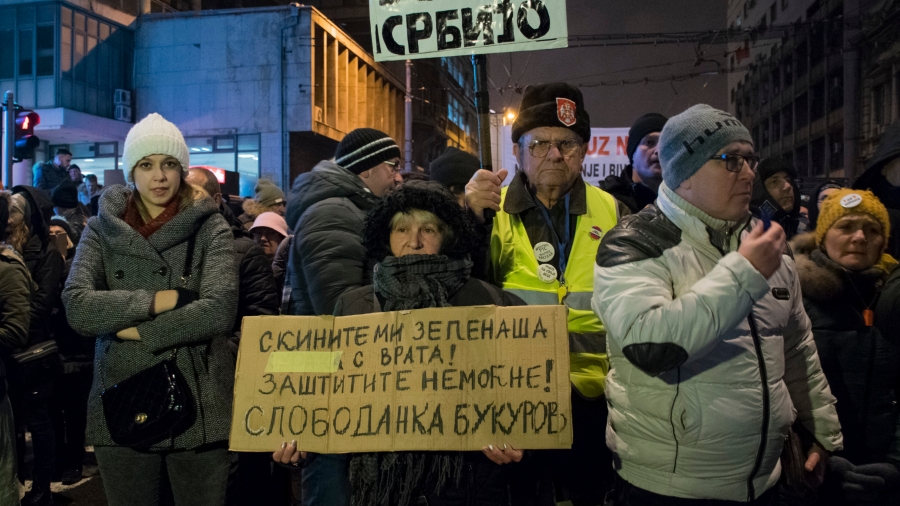 There have also been recent anti-government protests, some ongoing, elsewhere in the region, such as in Albania and Bosnia-Herzegovina.

Burazer said the current protests in Serbia are more diverse than those of recent years and rank among the largest of the last two decades with crowds of many thousands. In addition to political moderates, they include politicians and supporters from the far right and far left, as well as pro-Russian, pro-European Union and pro- and anti-LGBT demonstrators.

Still, Vučić is the country’s most popular politician with approval ratings of about 54 percent and continues to appeal to the West with EU aspirations. Yet, he also maintains a close relationship with the Russian president — Putin is the most popular foreign politician in Serbia and competes with the EU and US for influence in the Balkans. Critics accuse Western leaders of turning their backs to Vučić’s authoritarian tendencies because he’s seen as pro-Western.

“There is quite a strong atmosphere of fear in Serbian society. Vučić manages to win the elections not only because he’s really popular, but also because there’s a well-organized machine of incentives but also intimidation of voters."

Protests have also spread to smaller cities throughout Serbia. Mujanović said this is significant, “[The SNS’s] political electoral base is rural, so the fact that we’ve started seeing some kind of response from the people in those communities is hugely important because realistically, those are the communities that are being most adversely affected by corruption, clientelism, cronyism, brain drain.”

Burazer said the protesters’ main grievances are corruption and a low standard of living.

“Growth is very low and you can say it’s not really evenly distributed,” he said. “Employment depends too much on political connections. There’s a very high level of corruption which hasn’t really decreased over the years — we can even say it increased, despite the anti-corruption narrative from the government.”

Vučić is a deeply polarizing figure, dominating most of the media and accused of corruption and authoritarian tendencies by his opponents.

“There is quite a strong atmosphere of fear in Serbian society. Vučić manages to win the elections not only because he’s really popular, but also because there’s a well-organized machine of incentives but also intimidation of voters,” Burazer said.

It’s this atmosphere that Anasonović and the other protesters are trying to change.

“I really think we need to change our political approach and understand that if we want to change something, we need to do it by ourselves,” she said.