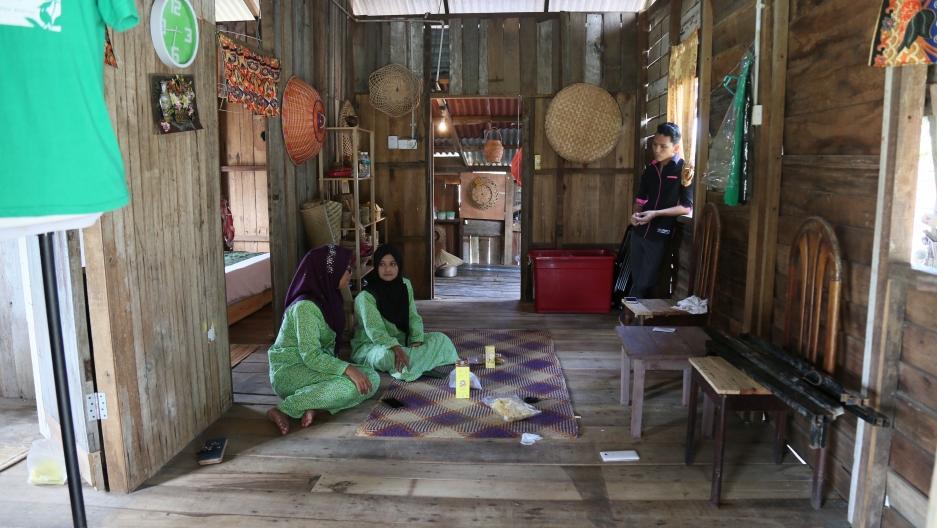 The sound of brickwork, swinging hammers and hand saws fills the air at a house in Setiu, a district in the state of Terengganu, Malaysia. Amid the commotion, another sound is audible — the lively banter between a small group of women. Their voices and hurried steps reverberate within the walls of a traditional, wooden house in the fishing village of Kampong Mangkok.

The women are rehabbing this small, one-story house — they plan to use it as a center for their female-run, nongovernmental organization, Setiu Wetlands Discovery (ECOSWED). The NGO focuses on ecotourism and social entrepreneurship, with the aim of raising awareness about the importance of wetlands and coastal ecosystems. ECOSWED formed in 2018 and has 20 members from four area villages. Most of the women involved with the organization are housewives, and ECOSWED provides them with a side income.

ECOSWED rented the house in May of last year, and they’re using it as a home base, where they can make items like baskets and mats and cook, especially foods like satar (fish parcel), tapioca and banana chips. ECOSWED does cooking demonstrations and uses culinary heritage as an entry point to talk to locals and tourists about wetlands and ties between food and the environment.

For ECOSWED, the renovation project has special meaning — the house is a physical incarnation of the original women builders’ independence, tenacity and friendship. The house was erected 15 years ago by two friends: Wan Lijah and Zaharah Sulong — better known by their nicknames, Mok Wan and Mok Su, respectively. Both were single mothers, enterprising and evidently, resourceful. Women are not known to build their own houses around this area, which makes Rumah Tok unique in this small village. 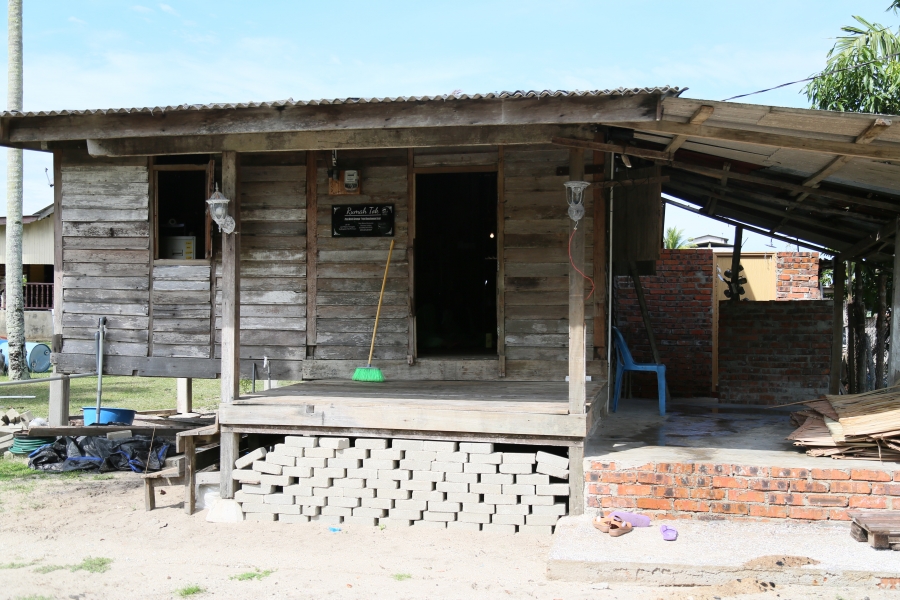 This is the facade of Rumah Tok, where restoration work is expected to be completed in March.

“At first, I couldn't believe that the house was built by women," ECOSWED member Rozita Nurul Kamal Din said. "But after learning about the builders and their story, I'm so proud of them and of east coast women, in general. We are a pretty amazing bunch. Not only are we business savvy, but we are able to do jobs that men do, too.” By rebuilding and renovating the house, she believes ECOSWED can preserve the original builders' legacy.

For her, the house reminds her that homes should function as the pulse for daily and communal activities. “Most rural women still manage their affairs and work from the comfort of their homes. But the preference for modern houses with bricks and partitioned spaces make it less vibrant and functional for activities like wedding and festival preparations.”

Rumah Tok is unlike the grandeur of area palaces and structures built for the Malay nobility, such as restored royal houses Terrapuri Heritage Village, and Rumah Tele. Instead, Rumah Tok stands out for its simplicity, something that ECOSWED hopes will attract visitors. Ecotourism and edutourism are major segments of tourism for Terengganu — and local cuisine and homestays are popular with tourists in Malaysia. ECOSWED hopes to capitalize on those trends to advance its wetland conservation efforts.

Related: These women made a big impact in 2018

As a tribute to the house's old-fashioned style, ECOSWED has dubbed the place Rumah Tok, Malay for “Grandmother’s home.” According to ECOSWED, the name came from Terengganu’s director of the federal department of town and country planning, Rohaya Abdul Kadir. She visited the house in July, saying that it fondly reminded her of her grandmother’s residence.

“At first, I couldn't believe that the house was built by women. But after learning about the builders and their story, I'm so proud of them and of east coast women in general. We are a pretty amazing bunch. Not only are we business savvy, but we are able to do jobs that men do, too.”

Ventilation and natural lighting are key features of old Malay homes, and Rumah Tok has minimal partitions to create an open flow. Raised on stilts, the house has a covered porch, two front rooms and a central area — a space that has minimal furniture as most activities such as weaving and packaging food are carried out on the floor. A small kitchen is situated at the back of the house on the lowest level with a built-in cabinet, with a toilet outside.

ECOSWED member Haya Hanapi, a local from Kampong Mangkok, had passed by the house several times over the years while visiting a friend who lives in the area. It was rundown but she was struck by the design. “The house was derelict for years and was rather unassuming. But it stood out compared to other homes in my village because it was unpainted and looked so simple,” Hanapi said.

Hanapi suggested renting the house for the NGO’s use after learning about its backstory. In part, ECOSWED wanted to help Mok Su financially (she owns the house). Also, the house faces the Alek Ulu river and is five minutes away from Kampung Mangkok beach — an ideal setting for ECOSWED. Previously, the women operated out of each other’s homes and businesses.

“I’ve known Mok Su since I was in high school, and she is also a friend of my late mother’s," Hanapi said. "Mok Su is in her 60s and is in poor health [and unable to keep up with the house]. On one of my visits to her house last year, the husband recounted the story about Rumah Tok, which was built adjacent to theirs. Mok Su was a divorcee with five children, and Mok Wan was a widow when they both met.”

Mok Wan, who hails from the neighboring state of Kelantan, worked as a trader. She would travel to Setiu with a van to sell banana fritters and snacks at the beach. She came upon Mok Su’s eatery in Kampong Mangkok.

Hanapi said both of their eateries were well-known because there were few operating in the area at the time, in the ’90s. Mok Su cooked common dishes such as fried rice, noodles and tom yum. They both shared a love for trade and quickly became good friends. After Mok Su’s eatery closed down, they decided to build a house where they planned to operate a small business selling local goods and snacks, according to Hanapi. 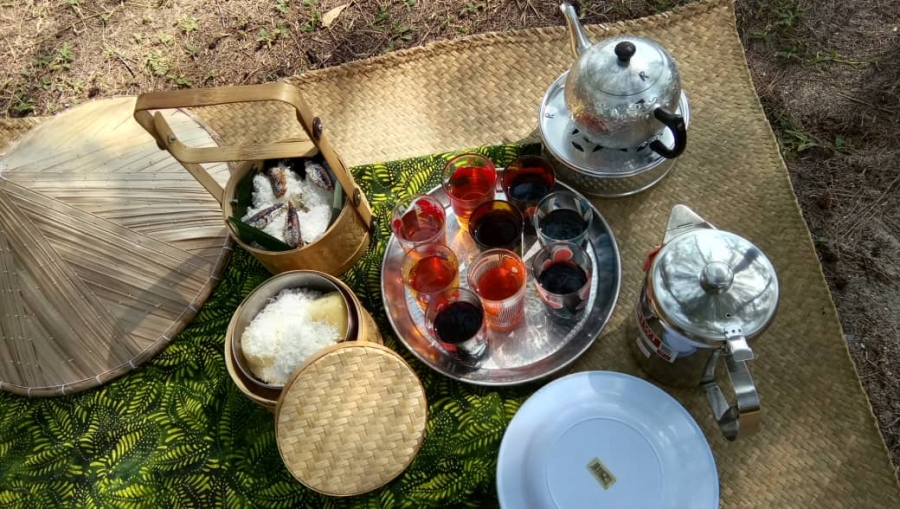 This is a traditional Terengganu picnic prepared by ECOSWED. The NGO makes the local snacks and dishes, and the setup includes woven mats, containers made from bamboo and a fisherman's sedge hat as a food cover.

The locals supported the two women in the house’s construction and helped with installing the roof and other areas of the house they couldn't reach. Some also advised them on structural questions, and neighbors helped carry heavy items, like the wood, Hanapi said. This spirit of helping others is called “gotong-royong.”

The original builders obtained wood from an old house in a neighboring village, which makes Rumah Tok’s foundation close to 50 years old, Hanapi said. However, Mok Su became ill not long after they built the house in 2004, so it mainly served as a resting site for Mok Wan before driving back to her village.

“We have not been able to track down Mok Wan who is 77 years old since this May," Hanapi said. "She returned to her village in Kelantan eight years ago. The last we heard was that she is also very frail.”

Like the original builders, the women of ECOSWED continue to redefine traditional roles through entrepreneurship. Most are married to fishermen, and often contribute to their households by diversifying and enhancing incomes. Apart from their day-to-day responsibilities, these rural women use their traditional knowledge to forage and harvest resources from the mangrove forests to prepare the food and products for their small enterprise. Following in Mok Su and Mok Wan's footsteps, entrepreneurship is second nature.

“East coast women can’t sit still — they are usually proactive in earning side income as they enjoy being involved in trade. Financial freedom shifted some dynamics in the family, with women being able to have more control over certain issues and make important decisions.”

East coast women in Malaysia are known to be enterprising, and their aspirations go well beyond the household, according to Dina Zaman, a founding member of IMAN Research, a Malaysian think tank focusing on society, religion and perception. “East coast women can’t sit still — they are usually proactive in earning side income as they enjoy being involved in trade," said Zaman, who hails from Terengganu herself. "Financial freedom shifted some dynamics in the family, with women being able to have more control over certain issues and make important decisions."

She says that Rumah Tok’s original build and restoration, plus ECOSWED’s conservation efforts, embody that spirit — as these projects are defined by a hands-on approach.

Rumah Tok was in bad shape when ECOSWED took over. It had been abandoned for about four years. “Its wooden floors and walls were rotting and damaged by termites. The zinc roof was in disrepair and it had no toilet. Restoration work commenced in June 2018. Current repairs are needed to preserve the foundation, appearance and quality of Rumah Tok,” Hanapi said. 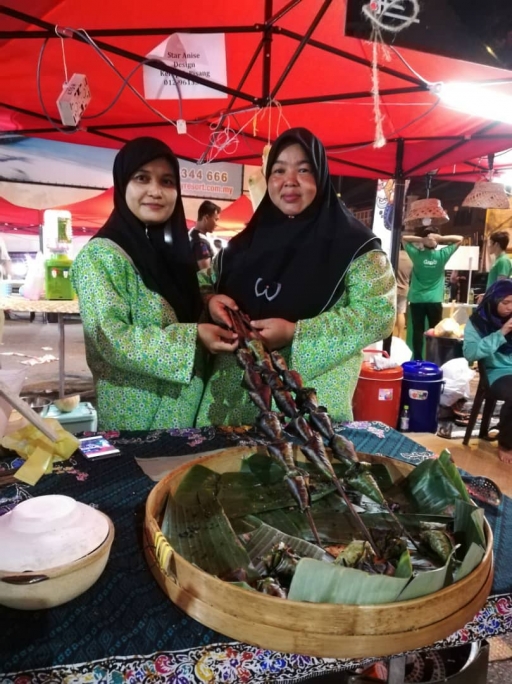 ECOSWED members are pictured with a grilled satar (fish parcel) at a local market.

Work on the house was initially assigned to local contractors. But after two days of slogging away, the women of ECOSWED rolled up their sleeves and decided to fix the house themselves.

“We hired two men to build the toilet but realized that they were working too slow," Hanapi explained. "In two days, they merely installed a total of three bricks and disappeared most of the day when they should have been at the house working. I was confident that we could complete a lot more work than them.”

At present, a team of six ECOSWED members have volunteered their time to restore the house. The women are renovating the kitchen, adding a toilet and a roof, and building a veranda that will serve as a preparation and cooking space.

They expect to finish the work by March 2019 and plan to turn the house into a homestay for budget travelers.