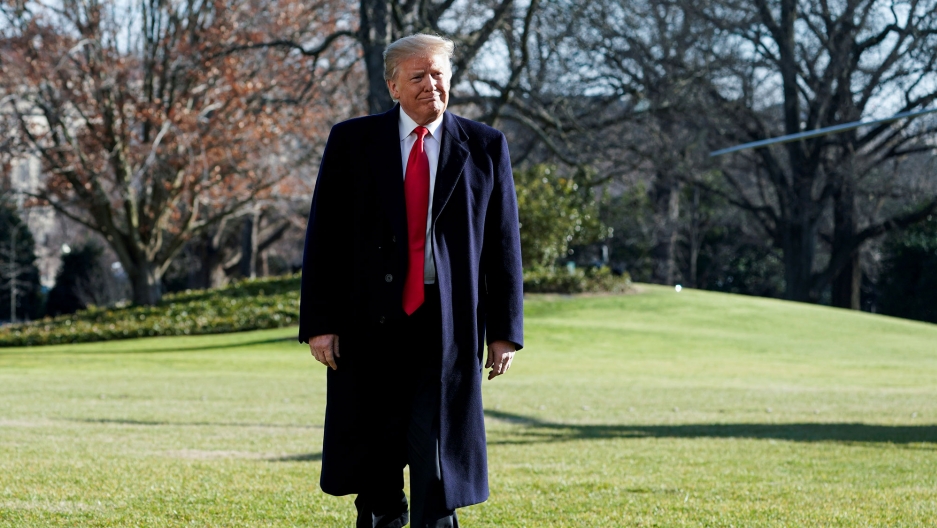 US President Donald Trump walks before speaking to the media at White House.

In an announcement that revived fears of another downturn in ties between NATO allies, US President Donald Trump threatened Turkey with economic devastation if it attacks a US-allied Kurdish militia in Syria.

Relations between the United States and Turkey have long been strained by Washington's support for the Kurdish YPG, which Turkey views as an extension of the outlawed Kurdistan Workers Party (PKK) that is waging a decades-long insurgency in Turkey.

Speaking in Riyadh, Secretary of State Mike Pompeo said he did not think the threat would change plans to withdraw troops from Syria. Asked what Trump meant by economic devastation, he said: "You'll have to ask the president."

"We have applied economic sanctions in many places, I assume he is speaking about those kinds of things, Pompeo said, adding he had not spoken with Ankara since Trump's comment.

Trump said on Sunday the United States was starting the military pull-out from Syria that he announced in December but that it would continue to hit ISIS fighters there.

"Will attack again from existing nearby base if it reforms. Will devastate Turkey economically if they hit Kurds. Create 20 mile safe zone...Likewise, do not want the Kurds to provoke Turkey," Trump wrote on Twitter.

Ankara is well aware of the cost of strained ties with the United States. A diplomatic crisis last year, when Trump imposed sanctions on two of President Tayyip Erdoğan's ministers and raised tariffs on Turkish metal exports, helped push the Turkish lira to a record low in August.

"Mr @realDonaldTrump It is a fatal mistake to equate Syrian Kurds with the PKK, which is on the US terrorists list, and its Syria branch PYD/YPG," spokesman Ibrahim Kalin wrote on Twitter.

"Terrorists can't be your partners & allies. Turkey expects the US to honor our strategic partnership and doesn't want it to be shadowed by terrorist propaganda," he said on Monday.

Trump gave no details about the safe zone proposal, but Pompeo said Washington wanted to provide security for those who have fought against ISIS and to prevent any attack on Turkey from Syria.

"If we can get the space and the security arrangements right it would be a good thing for everyone in the region," Pompeo added said.

Trump announced last month he would withdraw US forces from Syria, declaring they had succeeded in their mission to defeat the ISIS group and were no longer needed.

However, US officials have given mixed messages since then. The US-led coalition said on Friday it had started the pullout but officials said later it involved only equipment, not troops.

Turkish Foreign Minister Mevlut Cavusoglu said Ankara was not against the idea of a secure zone along the border, but said strategic partners and allies should not communicate over social media.

"Nothing can be achieved by threatening Turkey economically. We need to look at how we can coordinate together and how we can solve this," he said in a news conference with Luxembourg's foreign minister.

The Kurdish YPG has been a US ally in the fight against the jihadists and it controls swaths of northern Syria. Erdoğan has vowed to crush it in the wake of Trump's decision to pull US troops out of the region.

Erdoğan's communications director Fahrettin Altun said: "Turkey will continue its anti-terror fight decisively" and that it was a protector of the Kurds, not their enemy.

"Terror is terror and it must be eradicated at its source. This is exactly what Turkey is doing in Syria," he wrote on Twitter.

Turkey has swept YPG fighters from Syria's Afrin region and other areas west of the Euphrates river in military campaigns over the past two years. It is now threatening to strike east of the river, which it has avoided until now — partly to avoid direct confrontation with US forces.

An official from the US-backed Syrian Democratic Forces, a coalition of militias led by the YPG, said on Sunday ISIS militants were "living their final moments" in the last enclave they hold near the Iraqi border.

By Daren Butler and Lesley Wroughton/Reuters