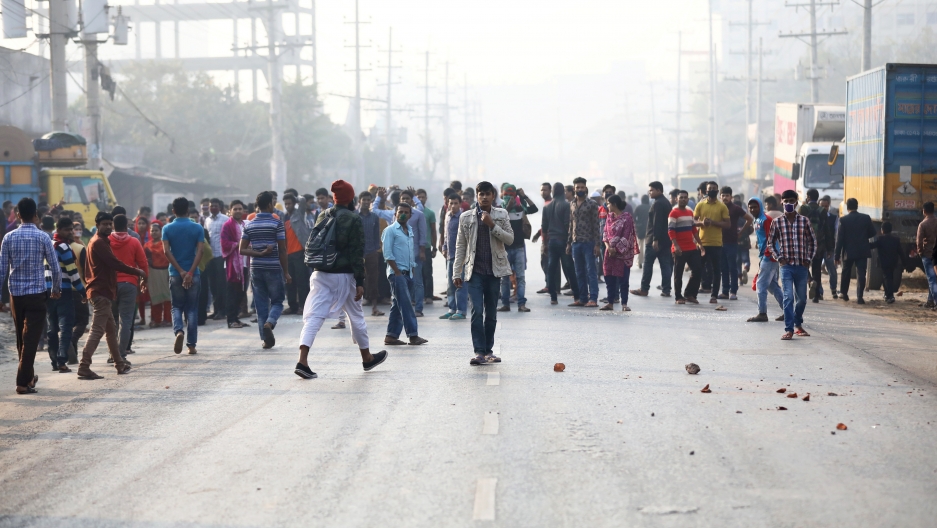 Garment workers block a road as they protest for higher wages at Ashulia, outskirt of Dhaka, Bangladesh, Jan. 14, 2019.

Several thousand garment workers took to the streets in Bangladesh on Monday, rejecting a pay hike in the crucial export industry as insufficient, police and union leaders said.

Garment owners agreed to raise workers' pay on Sunday after a week of violent demonstrations in which one person was killed and dozens wounded as police used teargas and water cannon to disperse workers who blocked roads and vandalized vehicles and factories.

Related: The face of Target (and others) in Bangladesh, at 400 pieces an hour

The protests are a test for the government of Prime Minister Sheikh Hasina, who won a third straight term in a Dec. 30 election, which was marred by violence and allegations of widespread rigging and voter intimidation.

"Workers from up to 10 factories tried to block a highway in the Ashulia garment manufacturing belt on the outskirts of the capital Dhaka," said Saminur Rahman, a director for the Industrial Police, which patrols the country's business hubs.

"We dispersed them immediately and all other factories are open," he added.

Though many have returned to work, most employees remain unhappy with the pay rise proposed as basic salaries were not raised as expected, union leaders said.

"We had to accept it as the proposal came from our prime minister. How can we dishonor it?" Bangladesh Garment and Industrial Workers Federation president Babul Akter said.

"We urged all workers to resume work. We hope the prime minister will ensure our proper wages in near future," he added.

Related: Wear and Tear series: The women who make our clothes

Garment owners said the rise put an extra burden on them which small factories will find difficult to afford, urging global brands to pay more for the clothes they buy.

Low wages and trade deals with Western countries have turned Bangladesh's garments sector into a $30 billion industry accounting for 80 percent of the country's exports, with retailers such as Walmart Inc. and H&M Hennes & Mauritz AB buying clothes from its factories.

"We have agreed to the new wages for the greater interest for the sector," said Siddiqur Rahman, president of the Bangladesh Garment Manufacturers' and Exporters' Association.

Related: Are factories better in Bangladesh after Rana Plaza? That depends on who you ask.

"Through increasing productivity, we will have to adjust to the rise," he said, adding: "At the same time, international brands will have to share the rising costs."

The government said in September that the minimum wage for garment workers would increase by up to 51 percent to $95 a month, payable in January, the first increase since 2013.