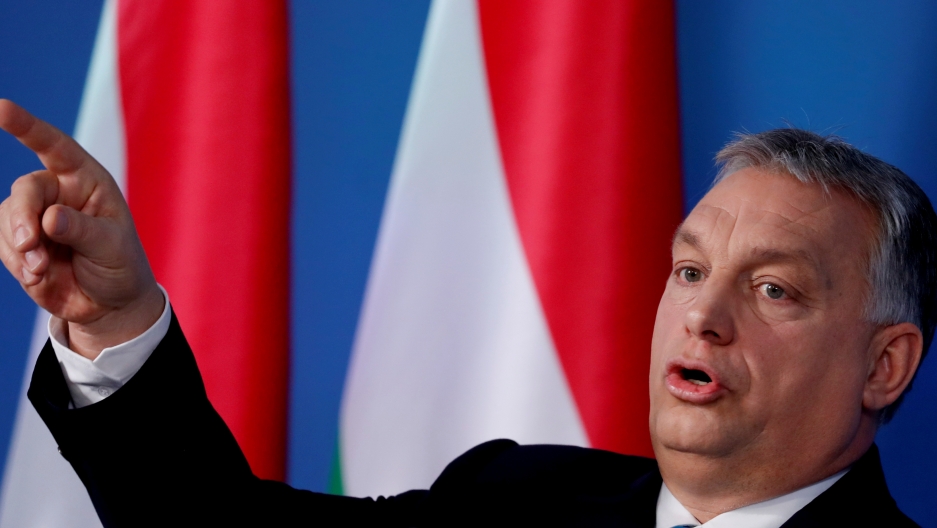 The roots of democracy in Hungary are shallow.

That’s been especially clear in the last nine years, as Prime Minister Viktor Orban has created a repressive and increasingly authoritarian state, operating under a pretense of democracy.

In recent weeks the political situation has become volatile. By early 2019 the Hungarian government was the target of a series of major demonstrations in Budapest and other Hungarian cities.

A flashpoint was a new labor law allowing employers to compel overtime to make up for the country’s labor shortage. The shortage was caused by the emigration of nearly a million young and skilled workers during the Orban years and the regime’s extreme anti-immigrant stance.

It’s not clear whether the protests are a passing phenomenon or a surge of new interest in democracy. 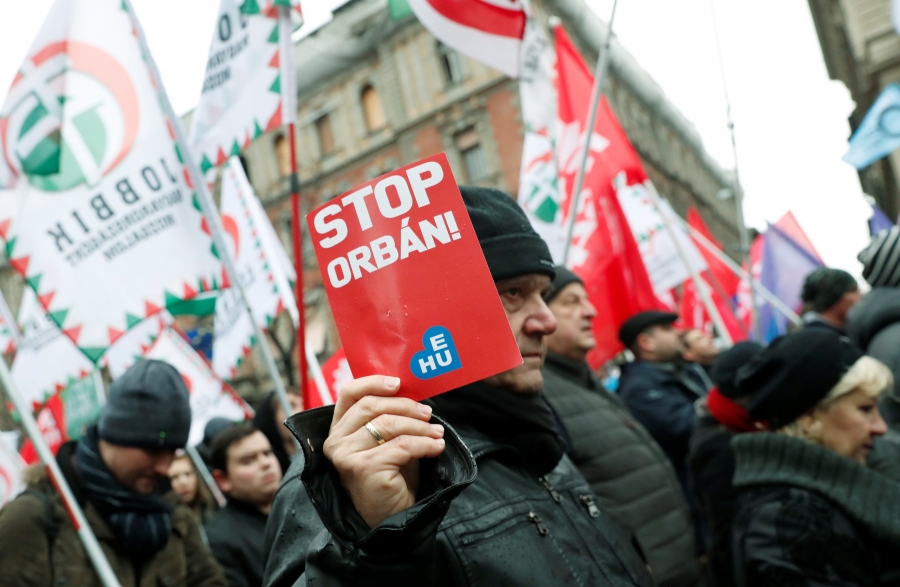 People take part in a protest against a proposed new labor law, billed as the "slave law," in Budapest, Hungary, Jan. 5, 2019.

Hungarians have a history of authoritarian domination, often by outsiders — Mongols, Ottomans, Russians, Hapsburgs, fascists and, after World War II, communist rule under the Soviets.

Having lived recently in Hungary for seven years, I witnessed how the psychological legacy of externally imposed rule has hobbled the growth of civic participation, a precondition for democracy. In Budapest, the common spaces of apartment buildings are often run down, and volunteering for an international civic organization is frowned upon.

After the fall of the Berlin Wall in 1989 and the end of Soviet domination, Hungarians went through two decades of democratic development, including a parliamentary system, a free media, an independent judiciary and growing civic participation.

But the global financial crisis of 2008 hit Hungary harder than other countries in the region, driving the economy down and unemployment up. It left many people feeling no better off than they had been during communism. Nationalism grew in the Hungarian countryside, where xenophobia thrived.

These were the preconditions for Viktor Orban’s sustained attack on Hungary’s weak democracy after coming to power in 2010.

Orban had earlier served as prime minister from 1998 to 2002, steering the country toward membership in NATO and the European Union, but then moving far to the right after his defeat at the polls.

Orban’s biographer, Jozsef Debreczeni, explained this shift to The New York Times: “They say that power spoils good politicians. With Orban that wasn’t the case. It was the loss of power that did it.”

The former prime minister blamed his defeat on the media and democratic pluralism. He set out to make sure that when he came to power again he would never lose it.

In his 2010 campaign, Orban fanned the flames of Hungarian discontent by attacking outsiders as oppressors, skillfully playing to Hungarians’ grievances about their history.

The European Union was his initial target. He depicted Brussels, the site of EU headquarters, as “the new Moscow,” and he smeared his opponents as stooges of foreign interests.

He anticipated the flow of migrants into Europe and made them a target by stimulating anti-Muslim sentiment and fears of terrorism long before the mass migration began in 2015.

Orban asserted that he was building a new model of governance, which he dubbed “illiberal democracy.” In reality, the mixture of voting and authoritarianism was Orwellian hypocrisy in which the winner of an election, like Viktor Orban, could claim a mandate to undermine democratic institutions.

After his 2010 election, Orban set out to centralize power.

He took over the media through a combination of political and financial pressure, regulation, censorship and disinformation.

Then he went after the judiciary. He weakened the rule of law by stacking Hungary’s constitutional court with allies, limiting its jurisdiction and forcing the early retirement of judges.

His next target was civil society. He accused organizations that receive funding from abroad of “serving foreign interests,” and arranged for the investigation of groups critical of the government while also attacking intellectual freedom.

After an extended regulatory campaign, last month Orban forced one of Europe’s leading international graduate institutions, Central European University, to leave the country by refusing to allow it to continue awarding US-accredited degrees in Hungary.

From 2009 to 2016, I was the president of Central European University. The university was founded in 1991 by Central European democratic leaders Vaclav Havel, Bronislaw Geremek and Arpad Goncz and the Hungarian American philanthropist George Soros. Its mission was to help revive intellectual freedom and academic excellence in the region, and today it ranks among the top 100 universities in the world in international studies.In campaigning for reelection last year, Orban made George Soros a target of his xenophobic rhetoric. Using lies with anti-Semitic overtones, he smeared the 88-year-old Soros as an instigator of Europe’s refugee crisis and a danger to “Hungary’s Christian civilization.” This was a particularly cynical attack since Viktor Orban had been the beneficiary of a Soros scholarship to Oxford in 1988. 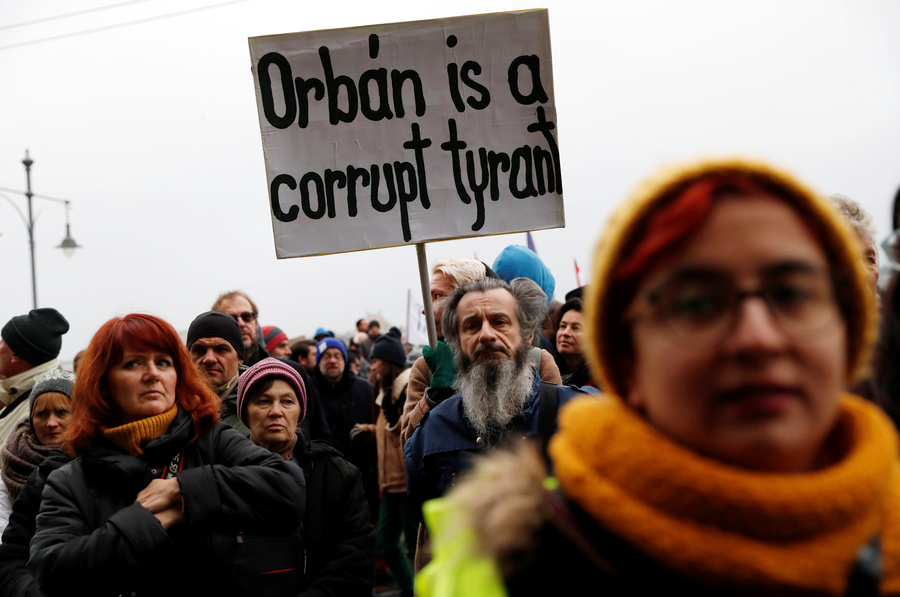 The Orban model of illiberal governance is deeply corrupt.

Transparency International, a leading anti-corruption organization, ranks Hungary under Orban as the second-most corrupt country in Europe behind Bulgaria. Billions of euros of EU funding for Hungarian roads, bridges and other infrastructure projects have been flowing through contracts awarded to loyal allies of the Orban regime.

But corruption can stir up popular opposition.

In 2017, 250,000 people in Hungary protested the government’s effort to host the 2024 Olympics because of growing evidence of the regime’s corruption and the likelihood that lucrative Olympic contracts would benefit its oligarchs. The government eventually abandoned the bid.

That’s how 100,000 Hungarians were mobilized and took to the streets in 2014 when the Orban government announced that it would tax citizens for using the internet.

The government backed down. Today, courageous online reporting by Hungarian investigative journalists has provided and published damning evidence of the Orban regime’s corruption.

How great is the risk that the Orban model will spread?

The elections of illiberal leaders in Italy, Poland and elsewhere in Eastern Europe are clear danger signs. Viktor Orban’s hand has been strengthened in Hungary by the waning influence of Angela Merkel in Germany and the election of Donald Trump in the US.

The European Union could take a stand against authoritarian governance in a member state, but it has so far failed to discipline the regime in Hungary that is destroying the democratic values on which the EU has been built.

In the end, internal opposition is perhaps the only way to challenge a ruler who claims that a democratic election is a mandate to dismantle the institutions of democracy.

It is too early to tell whether Hungary’s nascent protest movement will grow, but based on early manifestations this winter, democracy in Hungary may be showing some signs of life.

John Shattuck is a professor of practice in diplomacy at Tufts University.