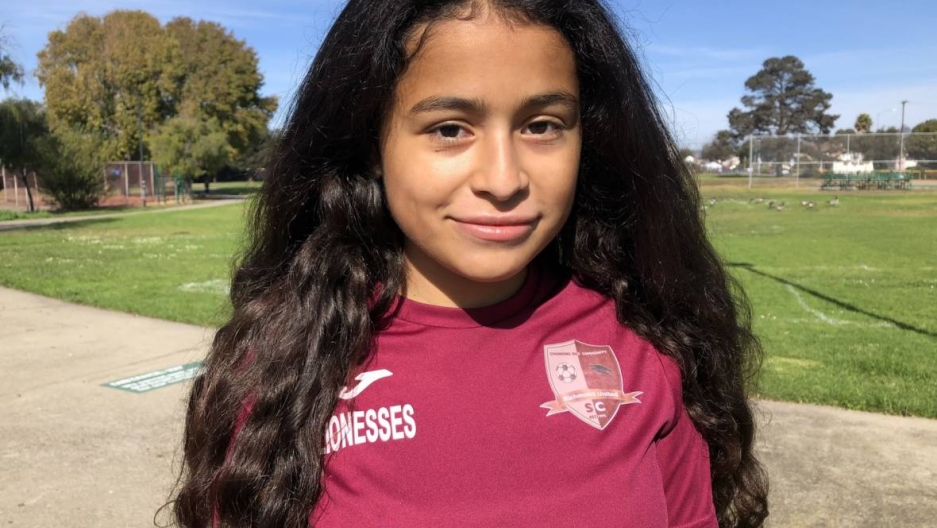 "I felt like I needed to speak up... and represent all the children whose parents have TPS and could be sent back," said Crista Ramos, 14. The Bay Area teen is suing the federal government.

Editor's note: This story originally appeared on KQED. You can find the original here.

High school freshman Crista Ramos used to be mostly preoccupied with school, friends, and soccer practice with her team, the Richmond Lionesses.

All that changed last January, when the Trump administration announced plans to end the humanitarian protections that allow her mother and about 260,000 other immigrants from El Salvador to lawfully live and work in the United States.

Since then, the Bay Area teen and US citizen has become an outspoken advocate to preserve Temporary Protected Status, becoming the lead plaintiff in a landmark class-action lawsuit.

The legal challenge for more than 300,000 people from El Salvador, Haiti, Nicaragua and Sudan is the first by US-citizen children and TPS holding parents, including Crista’s mother, Cristina Morales, who joined as plaintiff and has lived in the US since she was 12.

If the Trump administration ends TPS protections, Crista would face a monumental choice: Grow up in the United States without her mom, who would likely face deportation, or move with her to El Salvador, a country convulsed by poverty and one of the highest homicide rates in the world.

“It would be a big struggle because in El Salvador, there’s not good opportunities like, for careers,” said Crista, who is 14. “And it’s very dangerous to live there.”

Crista said she dreams of going to college, playing soccer for the US Women’s National Team, and — most immediately — keeping her family together.

Congress created the TPS program in 1990 to provide humanitarian relief to immigrants in the US who could not return safely to home countries struck by natural disasters or armed conflict.

The secretary of the Department of Homeland Security can designate a country for TPS status. After periodic review, DHS may extend the status. Immigrants from El Salvador and Nicaragua have been eligible for TPS more than 15 years. 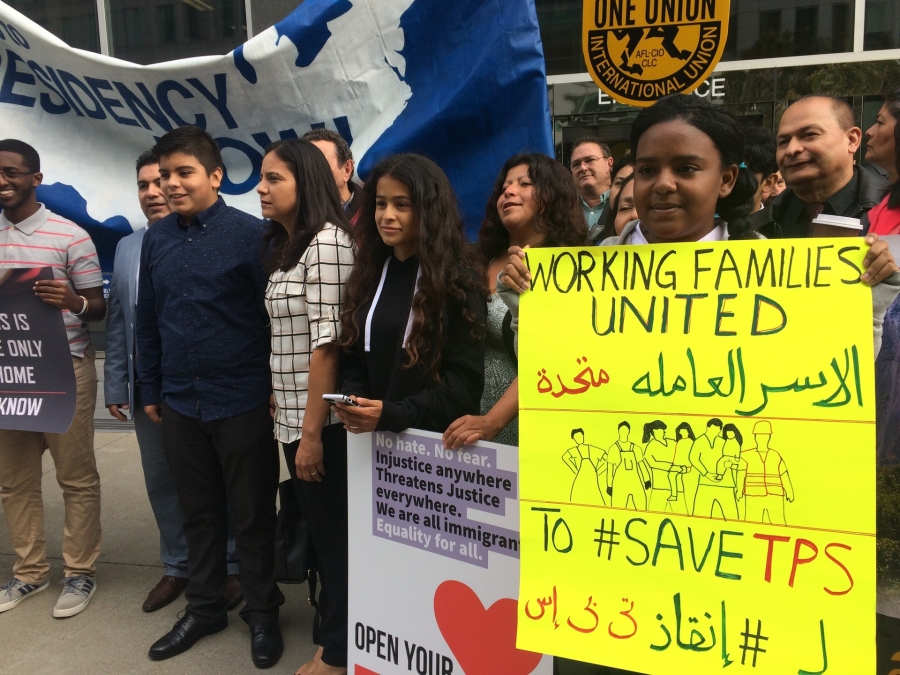 Sara Ahmed, 12, holds a sign in English and Arabic before attending a court hearing in San Francisco on Sept. 26, 2018. Cristina Morales, Crista Ramos and other TPS supporters rally nearby.

In October, Crista learned about a major step toward her goal.

US District Judge Edward Chen in San Francisco temporarily blocked the government from ending TPS, until he rules on the merits of Ramos v. Nielsen, which names US Secretary of Homeland Security Kirstjen Nielsen as defendant.

Crista heard about the judge’s decision as her dad drove her to school one morning. Both erupted in cheers.

“We were really happy in the car,” Crista said. “And when I got to school all my teachers were congratulating me because they already knew. And that made me feel more comfortable and positive.”

The Trump administration has since appealed to the 9th US Circuit Court of Appeals in San Francisco, which has yet to decide whether Chen’s preliminary injunction stays in place.

Crista says she used to be scared of public speaking, but not anymore.

“I think about how there’s other kids who are maybe too scared to speak up,” she said, referring to the estimated 273,000 US-citizen children who have at least one parent with TPS. “So I chose to help them, and be the voice of all the kids who are going through the same thing,” she said. 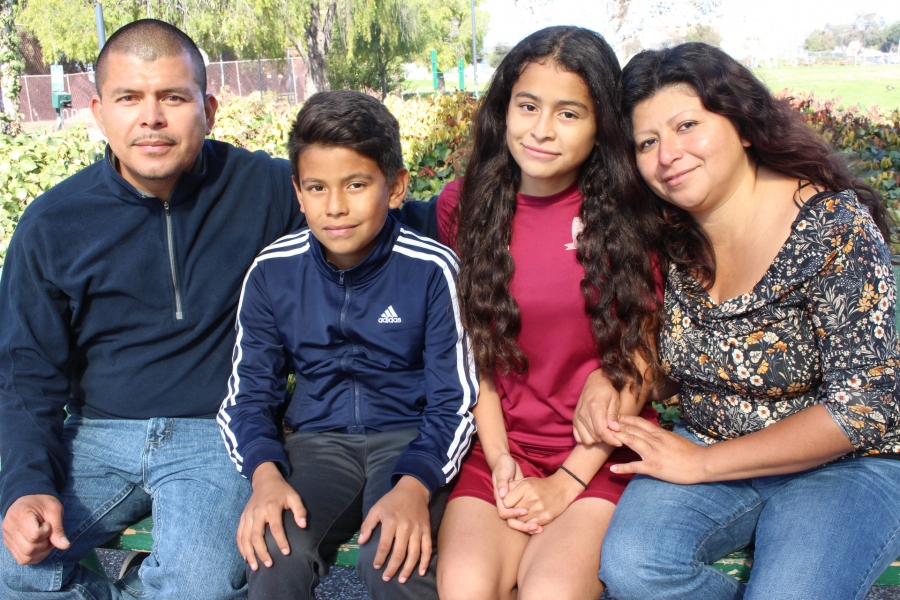 Because of the lawsuit, Crista has stepped into the spotlight, speaking before crowds of reporters at rallies, attending long meetings with attorneys, and going to court hearings.

As she walked into a hearing in September, Crista proudly pointed to a sign by the courtroom doors that read Ramos v. Nielsen. Crista asked if she could take the sign home.

“My goal is to keep my family and the other families together,” she said. “So that me and my brother and the other kids in these families can go on with our life, and education and plans.”

Morales said she’s proud of her daughter’s commitment and dedication. Crista’s friends have been often surprised to hear she’s leading this battle to defend the protections for immigrants, according to Morales.

“Crista is very shy and quiet,” said Morales, a school aide for special needs students. “But her mind is also very settled. Like, when she says something is not right, it’s not right.”

Related: A Syrian with temporary protected status says it's a matter of life or death

Emilou MacLean, a lead attorney in the lawsuit, conducted several interviews earlier this year with potential plaintiffs, many of whom were already involved in activism that sought more permanent protections for TPS holders.

MacLean said that’s how she met Morales, who at the time was working at an afterschool care program, and Crista. MacLean said during their first meeting, Crista asked a lot of questions about the lawsuit, and quickly recognized that it had life-changing ramifications for other children in families like hers.

“From the very beginning, Crista expressed a willingness to step out of her comfort zone for the protection of her family, but also for the broader impact this lawsuit could have,” said MacLean, with the National Day Laborer Organizing Network in Los Angeles.

MacLean asked Crista to be the lead plaintiff during a days-long meeting in San Francisco between attorneys and the 14 people who agreed to be plaintiffs, most of whom had traveled from other cities across the country.

“It takes a lot of courage to stand up and say I’m willing to put my name front and center against the Trump administration when something feels unjust,” said MacLean. “She has demonstrated an enormous amount of inner strength, and really sees this as part of the pursuit of justice.”

Crista’s family says coming out so publicly against the Trump administration has been stressful and feels like a risk, given the president’s aggressive immigration enforcement policies.

But because of that initial step, Crista has also lived unexpected moments for a girl from the working-class city of San Pablo.

In October, a nervous Crista stepped onto an airplane for the first time, traveling to Rome to ask Pope Francis for his support and deliver a letter. It asked Francis to travel to the US and lobby Congress to grant permanent protections for TPS holders.

Crista did not expect to see the pope up close, let alone shake his hand as she stood with about 10 US citizen children of TPS holders by St. Peter’s Basilica.

“We were seeing him, like, getting closer and I really was freaking out. We were all freaking out,” said Crista, whose parents are devout Catholics.

“Keep fighting,” Francis told the children in Spanish. “Migrating is a human right. Is that clear? And nobody can stop it.” 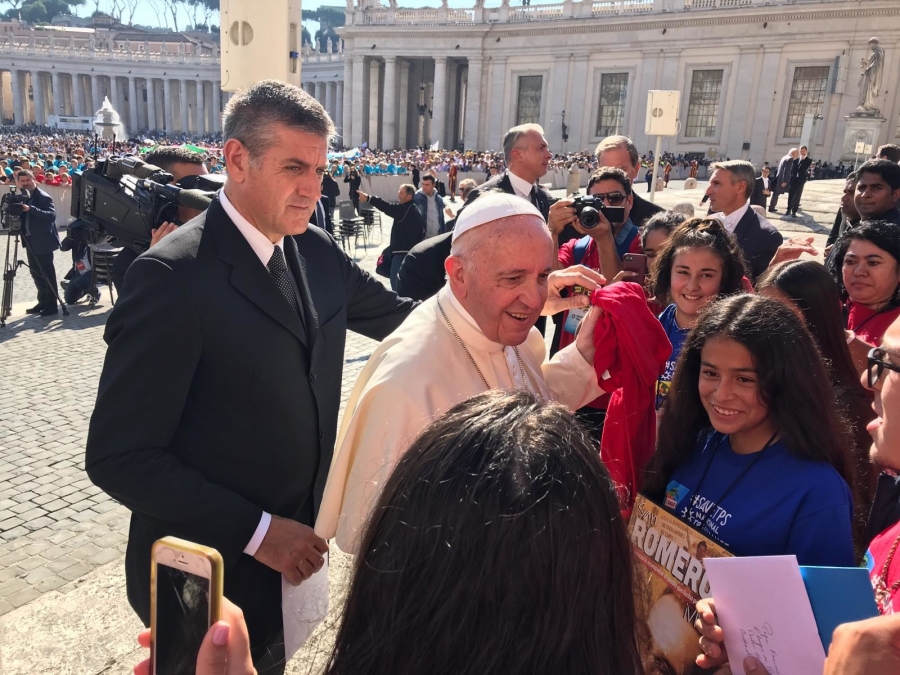 Pope Francis meets Crista Ramos and other US citizen children of TPS holders at the Vatican in October 2018.

At their home in San Pablo, Crista’s parents couldn’t believe their eyes when their cell phones started ringing with photos of a smiling Crista standing inches away from the Pope.

“You know, one night I was praying to God and asking him to give me strength to show my kids that everything is gonna be okay,” said Morales, “and Crista ended up going to Rome and being next to the Pope.”

Crista’s dad Edgar Ramos, a lector at church, chimed in: “It was everything.”

Ramos said the Pope’s message reinforced their hope that the family will prevail.

While the issue plays out in the courts, the parents try to protect their kids with a blanket of never-ending optimism, and focus on what they can control: sticking to their routine of school, work and soccer.

Ramos and Morales spend many weekday afternoons and weekends shuttling Crista and her 12-year old brother to soccer practice and matches in nearby Richmond and other cities in the Bay Area and beyond.

“Honestly we will do everything that is in our hands to keep everything normal for them,” said Morales. “I mean, we’re not gonna let this government decision (to end TPS) destroy our family.”