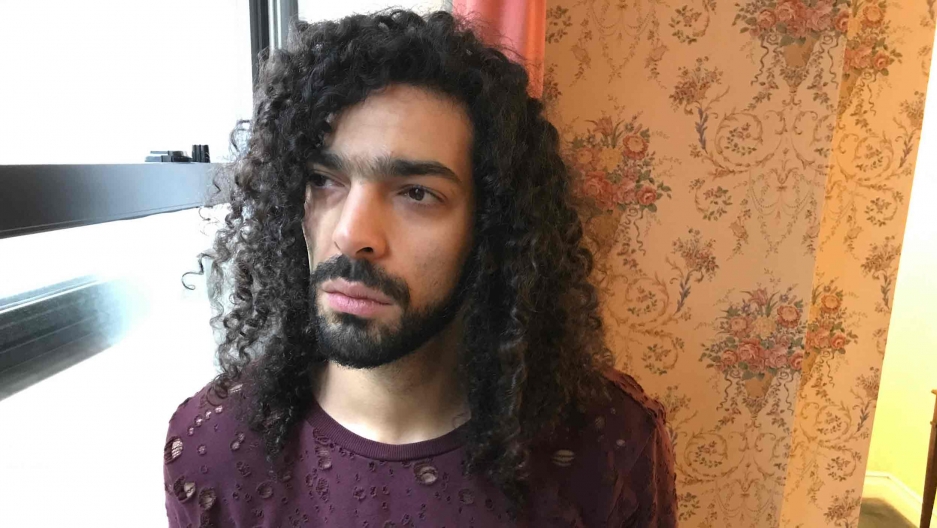 Egpytian musician Ramy Essam is living in exile in Sweden and had his passport revoked for his political music.

Egyptian musician Ramy Essam wrote a song in 2011 at the height of the Arab Spring.

The song? "Irhal,” which means "leave" — as in dictator Hosni Mubarak must leave.

"Irhal" became the anthem of the Tahrir Square protests in Cairo that would lead to the overthrow of Mubarak.

A lot has happened in Egypt since then: The revolution that toppled Mubarak was suppressed. Its leaders were thrown in jail, and a new authoritarian president took power: Abdul Fattah al-Sisi.

A year ago, Sisi ran for president and Essam wrote a song for that occasion, “Balaha.” Balaha means "date," as in the fruit.

But Essam says it also means something else.

“It's just like a way of people saying somebody's stupid or dumb,” Essam said last week during an interview in New York City. “We made ‘Balaha’ to criticize the first four years of the government and just try to raise awareness before the election so people can really think and try to choose something else. ... If there was something else. But there wasn't.”

Essam says that’s very similar to how life felt when Mubarak was in power.

And so were the consequences for the man who wrote the song's lyrics, Galel Behairi.

“So, it went really viral, and it made a great impact, according to the movement but in the same time what happened after was so sad, that the poet, Galel Behairi is in jail at the moment and he is spending a three-year sentence that came out from the military court,” Essam said. “This is the same shit going on, the military still, like, controlling everything, and it's the same corruption getting more; freedom of expression is dead.”

Essam isn't living in Egypt anymore — he says it's too dangerous for him there. He's currently in exile in Sweden, and he says his passport was revoked.

The loss of a passport also means that for a long time, he couldn’t travel.

“In my heart, yes I am [an Egyptian citizen], but on papers, I can't prove it anymore,” he said. “And on the practical level, as well, it wasn't easy because I lived almost the whole 2018 paperless, in Scandinavia, I couldn't go anywhere.”

Essam finally can travel and performed at a fundraiser for the Artistic Freedom Initiative last weekend in New York City. The World’s Marco Werman sat down with him.

Ramy Essam: I'm still connected with my home for sure, and I know very well that people are so exhausted and sadly, that the new government managed to, in the last four years, to put fear inside the people again. And according to the numbers, there are definitely more than 60,000 political prisoners plus the people that are getting tortured in jail, or getting killed in jail. And if things are still going like this, it wouldn't stay like this forever.

Marco Werman: When we last spoke in 2011, you said that one of your hopes for the future was that you'd be able to help more musicians in Egypt grow and mature. How much have you been able to do that and what are your hopes for other musicians stepping out and being vocal?

I'm sad that I couldn't start yet. To really do the support and to help that, I want to do that for my musicians and my colleagues back home. I hope that it has inspired any of the younger generations, that they can pick a good cause and good word and say something meaningful and helpful for the people. But on the other hand, I can't wait to start in the future a foundation, or any way to really help the artists back home, especially now when I'm abroad, I'm away, and I can work, I can tour the world. I have much more freedom than them there.

And yeah, one day, I will help the whole movement back home. This dream will never leave me.

I want to know what you miss about Egypt, about Cairo.

What would it take for you to actually return home?

This interview has been lightly edited and condensed.