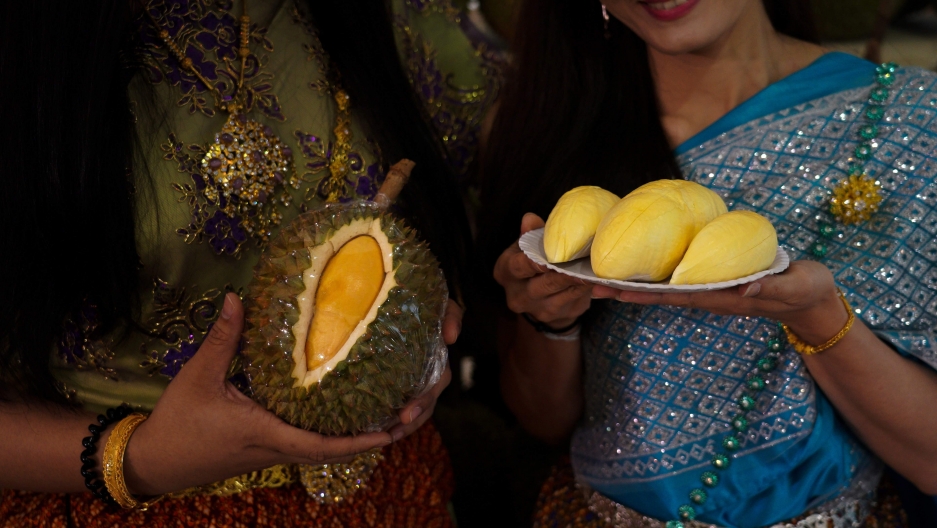 In America, durian is much more than a tropical fruit. It’s a punchline.

There is a subgenre of YouTube, clickbait videos that presents eating durian like an extreme sport. The shtick is always the same. Someone (or a group of people) is prodded to taste the fruit for the first time.

They will retch theatrically and then start describing it in the most revolting terms possible.

BuzzFeed’s contribution to this genre — a video titled, “People Try Durian (The Smelliest Fruit In The World)” — is fairly typical of the others. Amid shouts of “ewww!” a group of Americans liken the fruit to wet garbage, mayonnaise and body parts. The payoff: 4 million views.

Not to be outdone, a YouTube star called Coyote Peterson got 6 million views for his video, “Most Disgusting Food Ever?” in which he gags and spits durian into a trash can. There are quite a few videos like this, from amateur clips to bits on late-night TV shows. 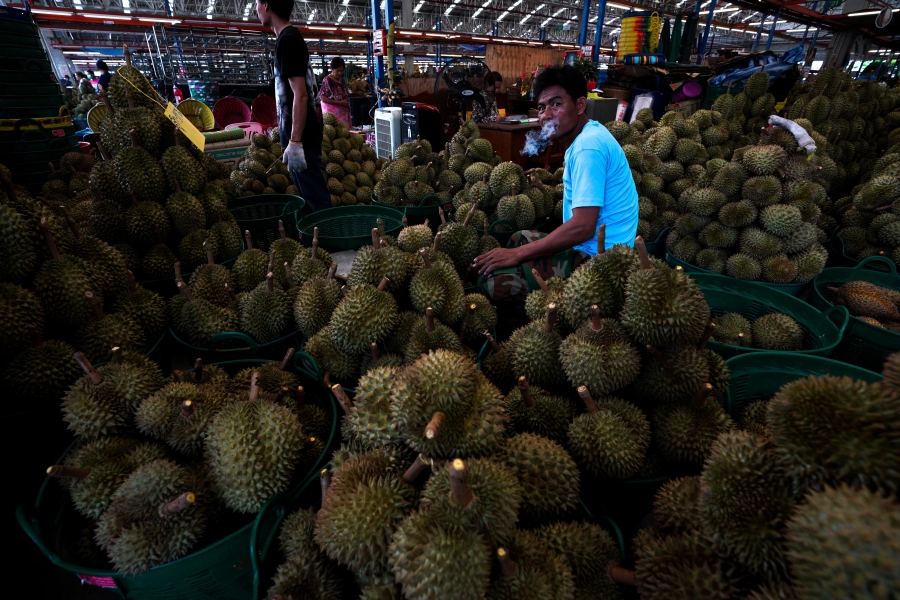 Durian vendors wait for customers at a market in Bangkok, April 26, 2018.

Athit Perawongmetha/Reuters/TPX Images of the Day

“Durian is a metaphor for how funky or possibly gross Southeast Asian cuisine can be,” said Chawadee Nualkhair, an author and food writer based in Bangkok. “It’s a way to illustrate foreignness … a shorthand for wacky.”

That’s the view from the West. But it’s difficult to overstate how silly these videos look from East and Southeast Asia. In fact, their comments sections are often filled with durian lovers from countries such as Malaysia or Singapore expressing annoyance.

Across Asia, durian is actually selling like never before. Long a coveted fruit, the durian has in recent years become the focus of a full-on, food craze.

This is largely owed to China, where the market for durians has quadrupled in the last 10 years to exceed a value of $1 billion. This heightened appetite for durian within the continent’s largest economy is sending ripple effects across the Asian tropics.

China’s topography and weather patterns aren’t ideal for growing the finest durians. So, the country imports from Southeast Asia — namely from Thailand but also Malaysia and Vietnam.

In Malaysia, a nation fiercely proud of its durians, investors are busy creating mega-orchards to profit from Chinese demand. This phenomenon is hitting Malaysia so hard that an official recently reassured the public that China would never be allowed to buy all of the country’s durians, an outcome that would be borderline treasonous.

This boom in fresh durian sales is happening in parallel to a growing market for durian-flavored snacks. The range of treats includes durian ice cream, durian pizza (from Pizza Hut), durian butter, durian-stuffed pastries, durian-flavored condoms and, at some McDonald’s outlets, the Durian McFlurry.

Chawadee is particularly well-positioned to decipher how durians are regarded in both North America and East Asia. Born in Thailand, she was raised in New Castle, a Pennsylvania steel town where she was “the only Asian girl in a town full of white people.”

She has spent much of her adult life in Thailand, however, excluding a stint at the Parisian culinary institute École Grégoire-Ferrandi. With that schooling in mind, I ask Chawadee to detail durian’s flavor profile in the same language you’d find on a bottle of wine.

“Musky. And fleshy,” she said. “But with bright, citrusy, honey-caramel undertones.”

She also offers a more pedestrian description: “It’s sweet and creamy. Like a custard. And ice creamy! Like vanilla ice cream, mango, apricot. All those elements are in there.”

As for the smell?

“I understand that it’s pungent,” she said. “Some people have compared it to garbage or sewage but I totally don’t get that. When I smell it, I associate it with something sweet. I just don’t remember what it’s like to smell durian without having tasted it.” 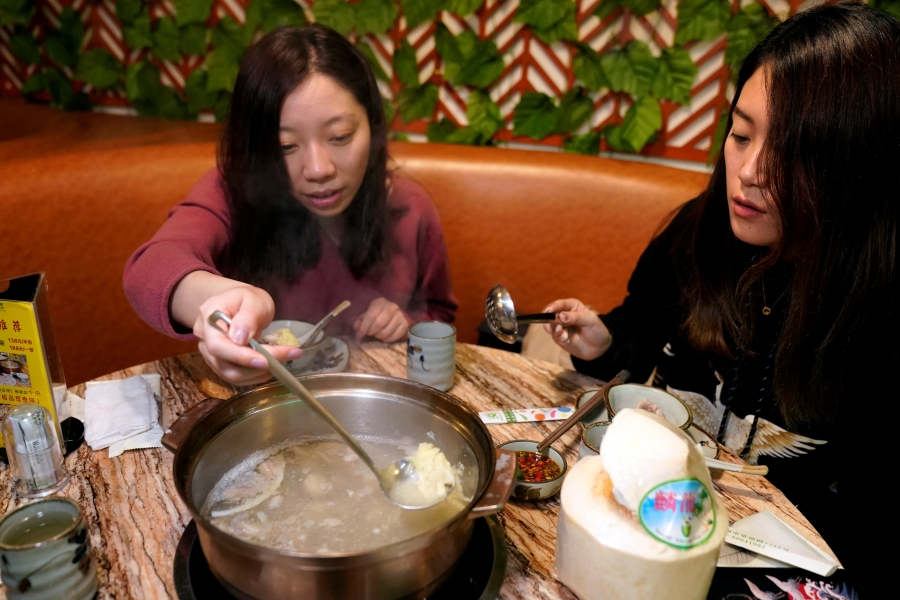 By the way, if there is any food that Westerners widely crave, but would send many diners in Southeast Asia reeling, Chawadee wagers it might be aromatic French cheeses.

“Not the cheese you stick in a ham-and-cheese sandwich. But like blue cheese. Saint-Marcellin. Tête de Moine. Thai people are going to be like, um, something bad just happened here. Something died,” she explains.

Given all the durian mockery on American social media, I wanted to know if durian sellers in Thailand are aware of this sneering. That curiosity led me to a wholesale fruit market in Bangkok where durians are stacked in tall pyramids towering over my head.

That’s where I met Suchara, a veteran durian vendor who has sold the fruit for more than 20 years. Most of her stock is comprised of a breed known as “mon thong,” which means “golden pillow.” This is the Granny Smith apple of durians — an everyday variety.

“Business has never been better,” she said, rattling off a list of countries that are driving exports. “Japan, Taiwan, Hong Kong, China most of all.”

But when I tell Suchara that durians are ridiculed in the US, she is genuinely befuddled.

“So, white people don’t like the taste of sweetness?” she asks. Well, I tell her, a lot of people believe it smells bad. “It does not stink! Some people may say that,” she said, “but they’re wrong. It’s so fragrant … and it makes your skin beautiful.”

America’s culinary mainstream may never embrace fresh durian the way it has absorbed quinoa or chia seeds — and not just because of its aroma.

A typical durian is as big as a bowling ball and nearly as heavy with menacing spikes jutting out in every direction.

Falling in love with durian is also expensive. In Bangkok or Kuala Lumpur, a standard durian might sell for $20. You’ll pay even more for more succulent breeds such as the Red Prawn, Black Thorn or a coveted varietal called Jackie Chan’s Wife.

But take even the most common durian from its native Southeast Asia and try to ship it to, say, Los Angeles. This proves such a logistical challenge that the sticker price can push north of $100. Only the most hypercurious foodies in the US will shell out that much for a hunk of fruit. 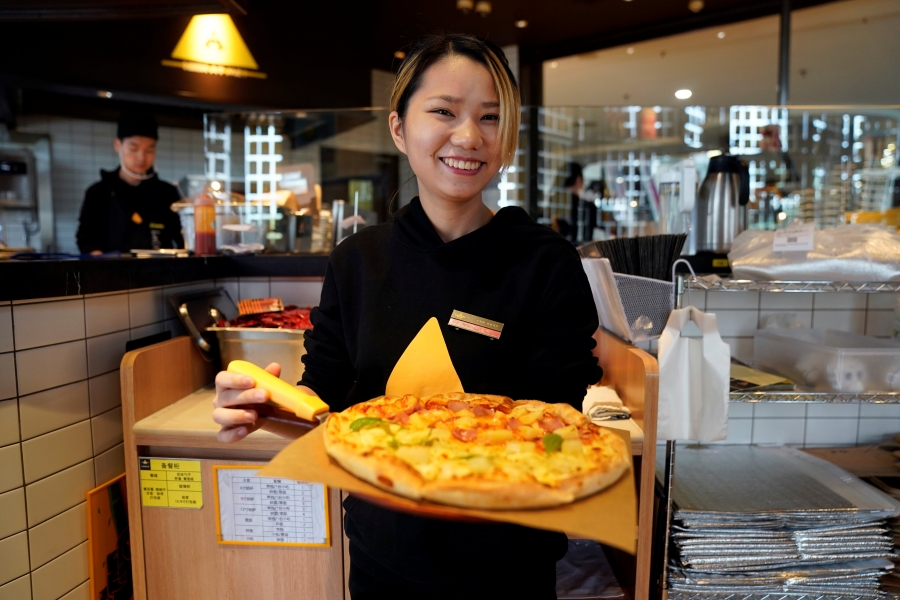 A server poses with a durian pizza at La Cesar Pizzeria in Shanghai, Nov. 2, 2018.

And yet, there are no logistical barriers to durian mania crossing the Pacific via durian-flavored, processed snacks.

“The way durian is being presented nowadays,” Chawadee said, “in cakes and ice cream, popsicles and cookies. That tells me the days of durian being a weird thing … are going to disappear.”

As for those durian gross-out videos, Chawadee believes that they really won’t age well.

Just like “pointing your finger at sea urchin and going ‘ewww’ is now very déclassé,” she said. “It shows you don’t know about good sushi.”

“The world is a small place now,” Chawadee said. “There will be a time when durian is seen as just another strong ingredient, such as anchovies. And I look forward to that. Because the more that Asian ingredients are accepted abroad, the more people will appreciate Asian food and Asian cultures.”