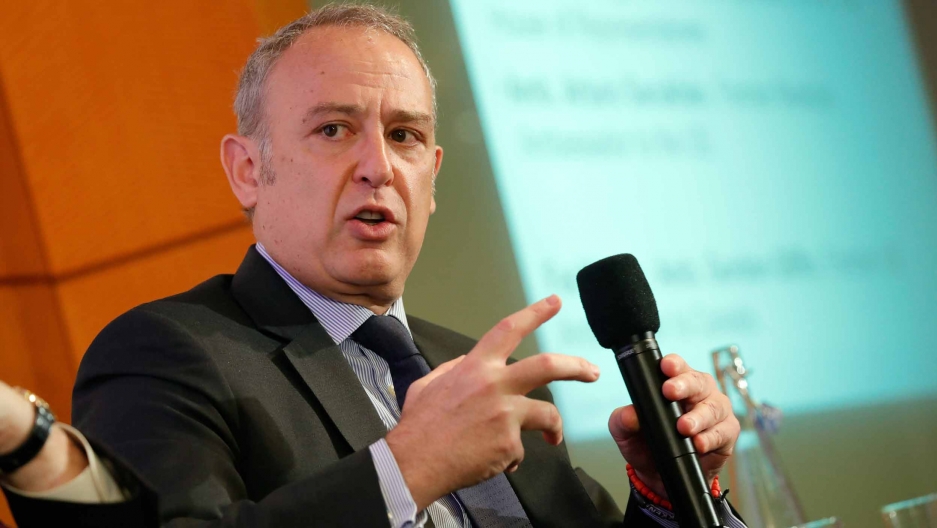 Former Mexican ambassador to the US Arturo Sarukhan speaks about Trump, Trudeau, and Nieto regarding NAFTA Negotiations at the law firm Dentons' NAFTA 2.0 Summit on October 11, 2017 in Washington, DC.

Mexican and US officials have worked together closely — especially since 9/11 —  to maintain security on their shared border. In his Oval Office address Tuesday night, US President Donald Trump insisted a $5.7 billion wall "is absolutely critical to border security."

He also promised that the wall "will also be paid for indirectly by the great new trade deal we have made with Mexico."

But the view looks different from Mexico. Arturo Sarukhán, who served as the Mexican ambassador to the US from 2007 to 2013, tells The World's Marco Werman that Trump's claims are misleading, and although the US-Mexico alliance is under pressure, their collaboration at the border continues.

The World: We heard a lot about a crisis on the border last night. We haven't heard much about the history of Mexico and the US working together since 9/11 to deal with the people coming across the border. What do you recall from your time as ambassador?

What is a big shame is that this narrative the White House has tried to craft of national security crises on the border with Mexico is precisely a huge disservice to the work that Mexico and the United States have done since the terrorist attacks of 9/11 to enhance intelligence-sharing, cooperation on the border to ensure that no suspect or known terrorists use that border.

Mexico and the United States have been working hand-in-hand since 9/11, sharing passenger lists of every single aircraft that flies into Mexican airspace to ensure that no one who was on the terrorist watch list is trying to fly into Mexico and then make the trek up to the northern border. There hasn't been, since 9/11, a single terrorist who has attempted to undermine the security of the US homeland that's crossed the border from Mexico.

Related: The 'real' border crisis: The US immigration system isn't built for kids and families

Has that collaboration all fallen by the wayside under Trump?

Despite the Mexico-bashing and the use of Mexico as a political-electoral piñata by President Trump … the cooperation that we set in motion more than a decade ago — which was deepened during the Bush and the Obama administrations — has continued.

The challenge is that the more Mexico-bashing that goes on, it could have a detrimental effect on the appetite and the willingness of a new Mexican government to build upon that strategic engagement. At some point, incoming Mexican government officials may say enough is enough. … And that could impact the long-term interests of both our countries.

We've developed, since 9/11, with Canada the United States and Mexico, a paradigm of North American common domain awareness, or common security, with the idea that a threat to one of the countries could become a threat to either one of the other two partners in North America.

The lies that were spewed by the White House press secretary over the weekend saying that 4,000 terrorists were apprehended across the border from Mexico in 2018, which has been absolutely debunked — these things could create … a lessening of the appetite of a new Mexican administration in the way that it engages and collaborates with the United States on very sensitive issues.

Give us a reality check. Some people argue that the US-Canadian border has been a more of a security risk in recent years than the southern border at least in terms of attempted crossings by people on the Terrorist Screening Database.

Given the nature of our two borders — the Canadian-US border and Mexican-US border — there are risks with both Canada and Mexico. That's the reason why, after 9/11, we understood that if we were to continue to build this synergistic, economic, trade-driven convergence that has been happening in North America since the early '90s, we needed to ensure that our borders with the United States were secure.

The focus of the debate in the United States has been on the Mexico border, whether it's racially driven or whether it's because it's easier to pit upon your neighbor to the south than it is to the north.

If you look at the hard data, this narrative that is being driven by President Trump simply does not hold water. The number of unauthorized immigrants in the US has been declining steadily since at least 2007. Over the past 10 years, undocumented immigration has increasingly taken the form of visa overstays, rather than unlawful border crossings. Arrests at the border have dropped in numbers not seen since the early 1970s — despite the spike from Central American transmigration, first in 2014 and then this last year.

And more importantly, immigration from Mexico has fallen to historically low levels. We've got zero net, if not negative, migration from Mexico to the US. That means that more Mexicans are going back to Mexico from the US than those coming over illegally across the border.

President Trump says the wall will be paid for indirectly by Mexico via economic benefits from the revised trade agreement, the USMCA. What do you make of that?

No. Mexico isn't paying for the wall through the new revised trade agreement.

Are you saying that Trump is essentially playing around with the math and describing a payment scheme that makes it look like Mexico might be paying for some of the wall?

What about drugs crossing the border, which Trump addressed last night. What is the best way to stop that?

So you're saying they're not being carried by individuals, they're being transported by trucks or cars?

There are 75,000 trucks across our border in both directions every day. And that's where the drugs coming north and the guns going south into Mexico — that's where most of this stuff is coming in through. So the challenge is at the port of entry, not in the desert between ports of entry.

What you need is a mix of technology, better infrastructure, more CBP personnel, to be able to inspect trucks and lorries and containers coming through the border. We need a much more intelligence-driven approach.

The border needs to be more like a membrane than a wall. The membrane allows the good stuff to come in but filters the bad stuff out. And that has to be the paradigm that both countries devise for our border.

Do you believe the border actually must be loosened between the US, Mexico and Canada?

That's a very divisive and toxic debate right now precisely because of how immigration has become a third rail inside GOP politics and how the president is using that to rally and mobilize his hardcore base. That's why he retained the Senate and the midterms in November — by playing up the fears of the migrant caravan from Central America on the Mexican border.

One of the issues that was never dealt with in the original NAFTA — labor mobility — is a difficult issue. That's why again it doesn't figure prominently [in the USCMA]. There is this chapter on North American visas, which allows mobility of professionals, engineers, doctors to move between Canada, Mexico the United States.

But if you look at the most accomplished success story that we have today in the world, the European Union — which is being challenged precisely on labor mobility — labor mobility has to be regulated, has to play in, because it will provide strength to the North American market. f you look at the demographics of the United States in 20-25 years, it won't have the doctors, the nurses, the workers [it needs]. Those can come from Mexico. If we find legal, orderly, transparent, safe ways of allowing people to come with a visa to work, and then come back and forth in a legal orderly manner, that should be the end of the game. I don't think we're anywhere close to having that debate at least with the United States today.