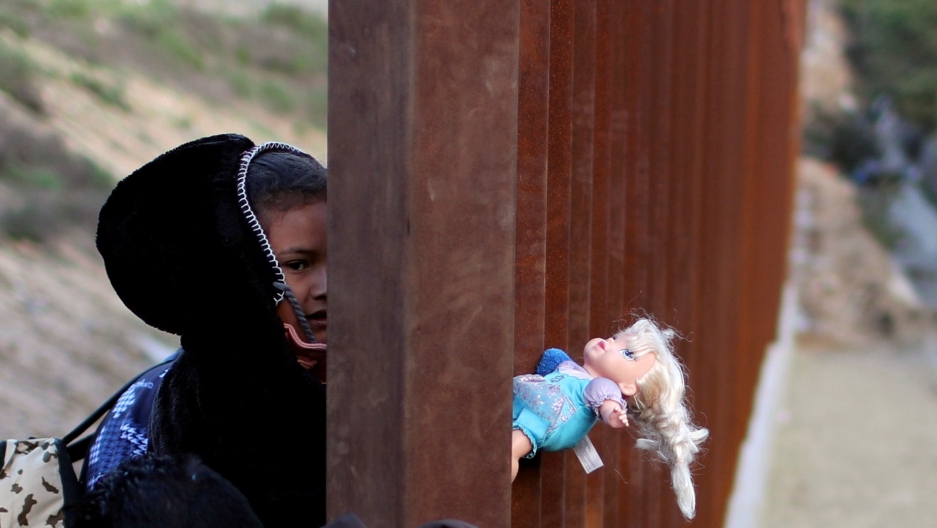 A migrant from Honduras, part of a caravan of thousands from Central America trying to reach the United States, jumps a border fence to cross illegally from Mexico into the US, in Tijuana, Mexico, Dec. 27, 2018.

Border disputes have recently taken on renewed importance, threatening political crisis in the UK, US and EU. Yet 2018 saw positive steps towards resolving some of the world’s most difficult border conflicts, between Uzbekistan and Kyrgyzstan and Ethiopia and Eritrea. What lessons can be drawn from these examples?

International boundaries are not the same as international borders. Boundaries are invisible vertical planes extending upwards into airspace and downwards into the subsoil, marking the legal limit of states. Borders, on the other hand, are the practices associated with managing movement over boundaries, such as customs checkpoints, passport controls, and fences. Although literally at the edge of states, they can symbolically figure at the heart of a nation’s politics.

This was amply demonstrated in 2018. In the UK, the “Irish backstop” question plunged the country into an unprecedented political crisis. In the Mediterranean, meanwhile, over 2,200 migrants died attempting to evade the EU’s draconian border controls. At the same time, political gains have been made by parties of the right who regard the EU’s border-control policies as not draconian enough.

Across the Atlantic, meanwhile, US President Donald Trump’s tub-thumping over a “caravan” of Central American migrants supposedly threatening the US border made 2017’s hotly-contested midterm elections even uglier. Tussles with lawmakers over funding a border wall with Mexico have now led to a government shutdown.

All this is a long way away from the “borderless world” that 1990s globalization theorists such as Kenichi Ohmae predicted would follow the end of the Cold War. Instead, we are seeing a “rebordering” of the world, the physical and symbolic reinforcement of what historian Timothy Synder has called “the wall around the West.”

But the Western perspective isn’t the only one. Indeed, 2018 saw a number of hopeful and instructive developments in Asia and Africa.

Created in the 1920s by the Soviet Union, Uzbekistan and Kyrgyzstan became independent states in 1991. Their mutual boundary was an internal division within the Soviet Union, and was never intended to be an international boundary. Consequently, when the two states became independent, there were numerous disputes about its precise course. Villages, ethnic groups, families, farms, transport links and utility provision crisscrossed the borderlands.

Nonetheless, in the late 1990s and early 2000s, the authoritarian president of Uzbekistan, Islam Karimov, imposed unilateral border controls. Visas were demanded, crossborder bridges demolished, roads blocked, and bus routes terminated. Villages that straddled the boundary were demolished and residents forcibly moved elsewhere. Barbed wire fences were erected, unmarked mine fields laid, and soldiers deployed to the border frequently used violence on petty traders and other borderlanders. A boundary commission was established, but its work stalled as relations between the two states deteriorated.

Populists in Kyrgyzstan reacted furiously, alleging that Uzbekistan was invading them. Inter-ethnic dynamics within Kyrgyzstan worsened, culminating in 2010 with pogroms against the country’s Uzbek minority.

In 2018, I visited the border and saw crowds of people crossing for trade and to visit family members, many of whom they had not seen for a decade and a half. Ethnic and interstate relations have improved as a result.

An even more striking example from 2018 was the ending of the Ethiopian-Eritrean border conflict. As with Uzbekistan and Kyrgyzstan, this boundary was a colonial legacy that artificially divided populations — and between 1998 and 2000, the two countries fought a bitter border war during which some 70,000 people died. The disputed territories were relatively small and of little economic value, but became heavily politicized by the militaristic governments of both countries.

Related: Francis Fukuyama on 2018, a year in identity politics

The Eritrea–Ethiopia Boundary Commission (EEBC) was established under a 2000 peace agreement to end the war. It rendered its decision in 2002 and planned to oversee demarcation in 2003. Although previously agreeing that the ruling would be binding, Ethiopia took the highly unusual position of refusing to accept it. Despite pressure from the UN Security Council, troops continued to occupy disputed territory, refugees remained in camps, and crossborder contact was minimal. The threat of renewed war continued.

But in April 2018, the relatively youthful Abiy Ahmed took over as Ethiopian prime minister. He moved rapidly to improve relations with Eritrea, accepting the EEBC ruling and pulling troops back from disputed areas. A mere three months after taking office, he signed a peace accord with his Eritrean counterpart, formally ending the war. This was accompanied by joyful scenes of families reunited after two decades.

How to make good borders

Good borders are not about technical lines on a map, but political will. Changes in leadership in Uzbekistan and Ethiopia were crucial in restarting boundary delimitation and border management processes that had become deadlocked. As a result, families have been reunited, ethnic tensions reduced, and trade opportunities increased.

There are broader lessons here. The impasses created by the Irish border question in the Brexit negotiations and Trump’s border wall have created political crises, poisoned politics, and fanned xenophobia. More migrants die each year because of the EU’s militarised border controls than at any other border on Earth. These outcomes are not inevitable; they are political choices.

The EU, UK and US like to see themselves as moral standard-bearers in the international community. When it comes to border politics, however, they could do a lot worse than look to Uzbekistan and Ethiopia in 2019.