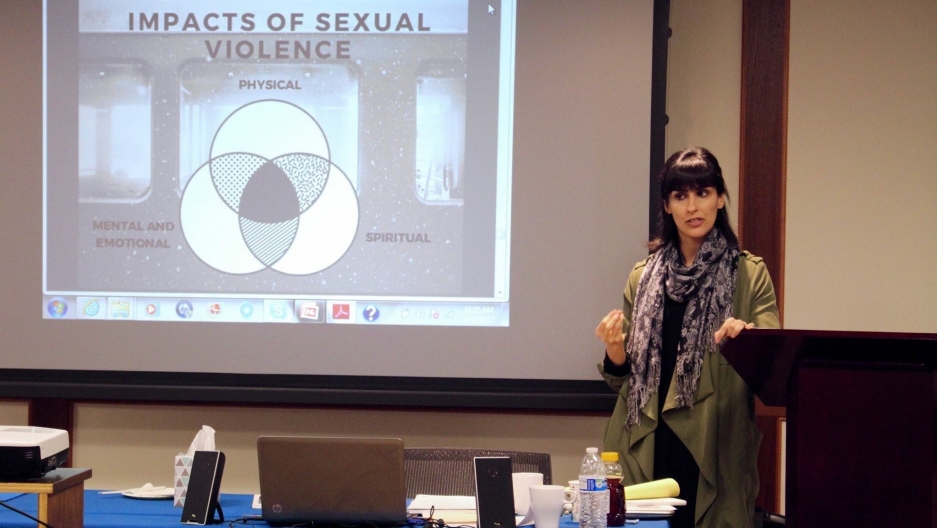 She was only 8. He was in his 20s. Sameera Qureshi didn't fully understand that she'd been assaulted by this distant relative, a Muslim just like her, until two decades later when she became a sexual health educator and started teaching students in schools about sexual abuse.

“I was 30 years old when I realized I am a survivor,” said Qureshi, now 36, speaking at a panel titled, “#MeToo in Scared Spaces,” in Columbus, Ohio, in September. “I can reflect back, and now all the traumatic memories start to make sense. My body … has kept the score till this day as I continue to unravel and work through the trauma that my body has held for that many years.”

In 2012, Qureshi joined HEART Women & Girls, a national organization that raises awareness about sexual health and violence within the Muslim community. The group, whose sex educators are all Muslim, has a presence in Chicago, Washington, DC, and Los Angeles. HEART also has "virtual educators" with whom Muslims can talk privately online, and it hosts webinars, talks and trainings across the country.

Related: Muslim women are speaking out against abuse with #MosqueMeToo

“For the past eight years, I've been driven spiritually, mentally and physically to do sexual health education by prevention within my communities,” said Qureshi, director of sexuality education and training at HEART.

“While I do not speak for all Muslim survivors, I do see my experience as guiding my work till this day and I hold onto a verse of the Quran in which one simple sentence is repeated twice within six verses of one chapter: ‘Verily with hardship comes ease.’”

Nadiah Mohajir co-founded the group in 2009 after identifying a need in faith-based communities for sex education, as traditional programs failed to meet their demands and religious programs were almost nonexistent or focused on topics like hygiene.

“Mainstream programs alone were missing the mark because they weren't really giving students the space to think about how their religious and cultural worldview could fit into some of the topics they're talking about,” Mohajir said. “So, we founded it to merge what was happening in the mainstream world with public health education and put a cultural lens on it.”

The group provides a forum for Muslims to talk about issues that can often be taboo, working with mosques, campus chaplains and community centers as well as other organizations like Planned Parenthood and rape crisis centers to raise awareness among non-Muslims about the merits of culturally sensitive sex education.

Related: These young women are raising awareness about sexual health in Iran

HEART works with the Muslim community on everything from sex education 101 to HPV awareness. The group also regularly partners with universities and research institutions to collect data and contribute to the literature pertaining to Muslim communities.

Jeanine Erikat, a senior at the University of California, Irvine, said the group had a meaningful impact on her as a Muslim. “HEART opened up a big space that's been missing on our campus for people to talk about sex and sexual violence without having to worry about how I'm perpetuating Islamophobic stereotypes about Muslim men or how oppressed I am,” said the 22-year-old majoring in public health sciences and history.

Erikat later became a fellow at HEART's university chapter, building relationships with different departments on campus, including the Campus Assault Resources and Education, to help non-Muslim counselors cater to Muslim students' needs. “A lot of people have told us how, as Muslims, they don't feel comfortable going to that space because no one has that kind of cultural training. So, we're working on meeting with people from that office to discuss what that would mean for Muslim survivors and how you could support them.”

Erikat said that the organization's usage of Islamic texts to discuss topics that are often taboo have been particularly eye-opening because it taught her about sexual health from an Islamic lens and helped bust myths that are often perpetuated in the community.

Many of HEART's sessions open with passages from the Quran and hadith (sayings attributed to the Prophet Muhammad) that make references to sex.

“There are fatwas [Islamic religious leader’s legal opinion] and interpretations regarding all aspects of sexual relations down to intercourse,” said Sylvia Chan-Malik, a scholar of women's and gender studies at Rutgers University. “Islamic scholars have been extremely explicit about these things. It's not a prudish religion in that way.”

“HEART opened up a big space that's been missing on our campus for people to talk about sex and sexual violence without having to worry about how I'm perpetuating Islamophobic stereotypes about Muslim men or how oppressed I am.”

Chan-Malik, author of the recently released book, “Being Muslim: A Cultural History of Women of Color in American Islam,” explained that Islam has a rich history of female scholarship that has been erased by male voices.

“Women's interpretation of the Quran and the hadith produce very different understandings of sexuality and what sexual relationships are,” she said. “Islamic feminism looks at emphasizing the ways in which the Prophet Muhammad put himself on very equal footing with his wives or women in the community. So, it goes back to who gets to interpret the text.”

Qureshi echoed Chan-Malik's sentiment. “Faith is not the problem,” she said. “It's the misinterpretation and misuse of religion. Female leaders are reteaching a lot of men about justice, equality and equity of women's rights within Islam to bring forth that narrative.”

That has been heightened since the #MeToo hashtag flared, leading to more awareness about the sexual violence and abuse perpetrated against women. But Qureshi says Muslims have a unique experience in the #MeToo era: They are “hypervisible” in society, attacked by politicians and often targeted after terrorist attacks, and yet their unique experiences are rarely addressed.

“‘Don’t report. I’ll be tried as a terrorist,’” Qureshi has often heard other women say, highlighting the complications of #MeToo for Muslim women.

“There's a great distrust of authority, of police. For people to come forward and use law enforcement, it's much more challenging … [and it's] often not an option and sometimes that's used by perpetrators to silence victims. It's such a complex narrative for Muslim women within the #MeToo movement.”

Muslims also have to contend with increasing Islamophobia and fears of fanning prevalent anti-Muslim sentiments. There are also heightened concerns that those who turn to law enforcement may be deported if they are undocumented immigrants or refugees.

“You don't want to go outside of your community to report an incident like that because as a Muslim woman in the US or the West, you're hyperaware that there are ways in which your community, your religion, your scarf is already misinterpreted and misunderstood by broader society,” Chan-Malik said.

Related: Why some Iranian women are taking off their headscarves and hanging them on a stick

These fears are magnified when the perpetrator is a religious man with a large following on social media, like an imam. “It's hard for people to see through it [because] we're not taught sexual violence literacy … we're not taught to question authority especially when that authority has a long beard and a hat on his head and millions of followers on Youtube,” Qureshi said.

“Islamic feminism looks at emphasizing the ways in which the Prophet Mohammed put himself on very equal footing with his wives or women in the community. So, it goes back to who gets to interpret the text.”

A number of scandals have recently rocked the Muslim communities — here in the US and abroad — with cases of renowned Islamic figures getting accused of sexual assault or impropriety, including Nouman Ali Khan, a preacher from Texas, and Tariq Ramadan, a prominent Swiss scholar.

“These types of religious teachers are constantly emphasizing certain notions of religious piety and modesty for Muslim woman as central tenets of their faith,” Chan-Malik said. “So, there's an extra level of shame attached to that.”

Organizations like HEART recognize that survivors of sexual abuse in religious communities like Muslim ones face a different set of challenges, including issues with reporting the crimes perpetrated.

“The fear of coming forward and shame that people experience, the denial … trauma … a lot of that is very similar across the board and not really specific to any one cultural or religious background,” Mohajir explained.

“[But] in Muslim communities, victim blaming may take a religious shaming kind of framework where people falsely correlate certain religious traditions around modesty or gender segregation to justify why the abuse occurred.”

Oftentimes, religious tradition is exploited and misused to scare women into silence or submission. That includes justifying marital rape by referring to men's sexual rights as spouses, or pointing to the tradition in Islam that says: “Give your brother 70 excuses when he makes a mistake.”

“That tradition is specifically for small mistakes and not for something that was a crime committed against somebody else,” Mohajir said.

That's why working with religious institutions such as mosques has come with its own set of challenges.

“Mosques are not forthcoming. There's a lot of bureaucracy there and a lot of red tape. We've gotten our share of backlash and opponents who tell us that this work is too progressive, too Western, too liberal,” Mohajir said.

“But we also have our share of strong supporters who say, ‘This is what we've been waiting for. And this is exactly what our community needs.’”

Correction: An earlier version of this story incorrectly stated that Sameera Qureshi taught abused children. It has been corrected to say that she started teaching students in schools about sexual abuse.