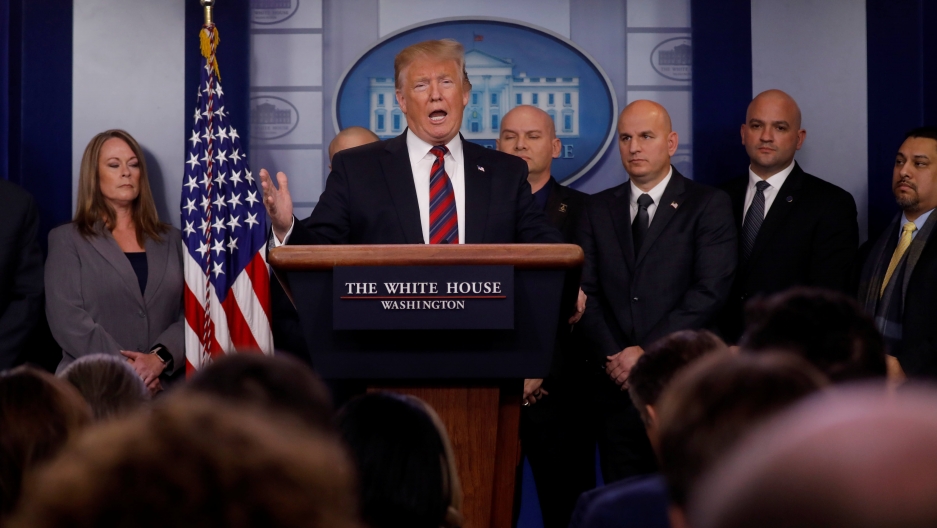 US President Donald Trump speaks to reporters about border security in the briefing room at the White House in Washington, DC, Jan. 3, 2019.

The Trump administration has several times this week used a statistic to reinforce its argument that the country needs a wall, or some kind of physical barrier, along the entire US-Mexico border.

President Donald Trump himself said Thursday that border agents had “apprehended, last year, 17,000 criminals trying to get across the border.”

But that’s only partially true.

According to the Department of Homeland Security’s latest statistics, yes, 16,831 “criminal aliens” were encountered by Customs and Border Protection in Fiscal Year 2018, excluding the final month of September. (The US government’s fiscal year begins on Oct. 1 and ends on Sept. 30.)

That seems pretty black and white. The final number for FY18 will probably be even higher once September’s figures are added. (The DHS website is not being updated because of the shutdown.)

However, a full 63 percent of those individuals were “encountered” by the Office of Field Operations (OFO). Those are the people you meet at the airport and at border crossings. In other words, the “criminal aliens” they encountered were travelers who failed routine checks at legal entry points and were denied entry.

When a non-US person enters the country, their fingerprint is electronically checked, they go through a facial-recognition screening and of course, their name is checked. If any of these gets a hit on a law enforcement database, the person is deemed inadmissible and goes back the way they came.

Only 6,259 individuals of the 362,000 individuals apprehended by Border Patrol were actually found to have criminal convictions. Those individuals get fast-tracked for deportation.

That still seems like a big number though. But take a look at their crimes. A full 47 percent of the 6,259 individuals were convicted for illegally entering or re-entering the United States. 14 percent have DUIs. One in ten has a drug offense.

Only 13 percent — or about 800 people — have records of violence or convictions for sexual or firearms offenses. That’s less than 1 percent of the total 362,000 apprehended by the Border Patrol in that period.

That’s a ratio of 1:450. By contrast, one in 12 adult Americans has a felony conviction.

More than 700 persons were apprehended for suspected gang ties. And CBP agents felt obliged to use force on almost 1,000 occasions to defend themselves.

So yes, some "bad people" are trying to come to the United States. But it’s not as bad as President Trump would have us believe.

By the way, “criminal alien” is a government term used to describe a non-US person with a conviction on their record, anywhere in the world. If disclosed as part of the immigration and visa process, a criminal record can be overlooked. So, people usually only get in trouble if they are caught entering illegally, or if they fail to disclose their record prior to travel.