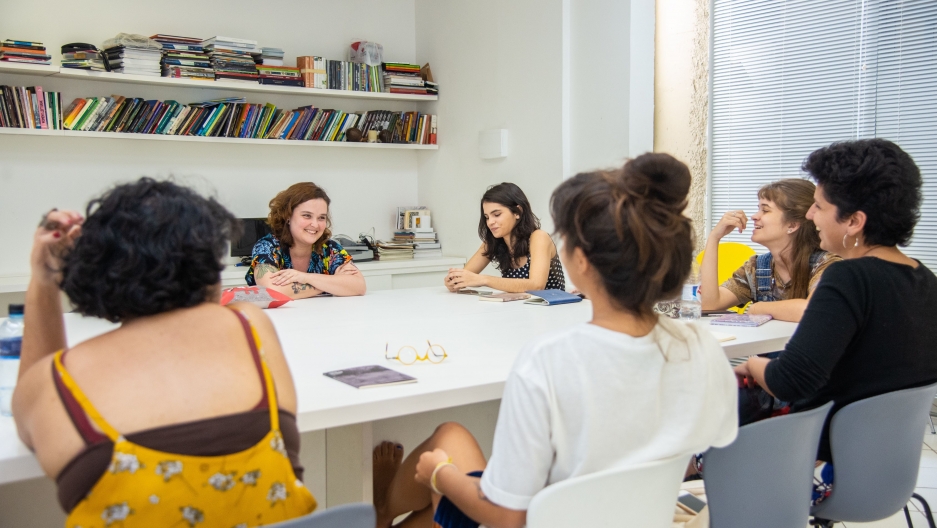 In 2018, Taís Bravo and Estela Rosa from the Women Who Write group were invited to teach a weekly workshop at the prestigious Federal University of Rio de Janeiro.

Clarissa Xavier voted in Brazil’s presidential election in October with a book under her arm — a copy of British author Virginia Woolf’s 1929 work, “A Room of One’s Own.” Xavier participated in an online campaign asking people to bring books to the polls to silently protest against ignorance and intolerance of others.

She was struck by how Woolf's title, which advocates for space for women writers within a literary tradition dominated by men, resonates still today — especially in light of anti-feminist rhetoric from Jair Bolsonaro, who was sworn in as president on Tuesday. “It’s amazing how I can see in the United Kingdom of the beginning of [the] 20th century my own hometown in Brazil in the 21st century,” Xavier said.

Several years ago, Xavier realized there was a dearth of women writers on her own bookshelves.

“That really bothered me,” she said. “[The market ] is ruled by men who protect each other. They don’t believe there is any problem when it comes to women representativity in literature, even though most of the books you see at a bookstore were written by men. Also, consciously or unconsciously, they don’t read women, so, they don’t empower women writers or feminists.” 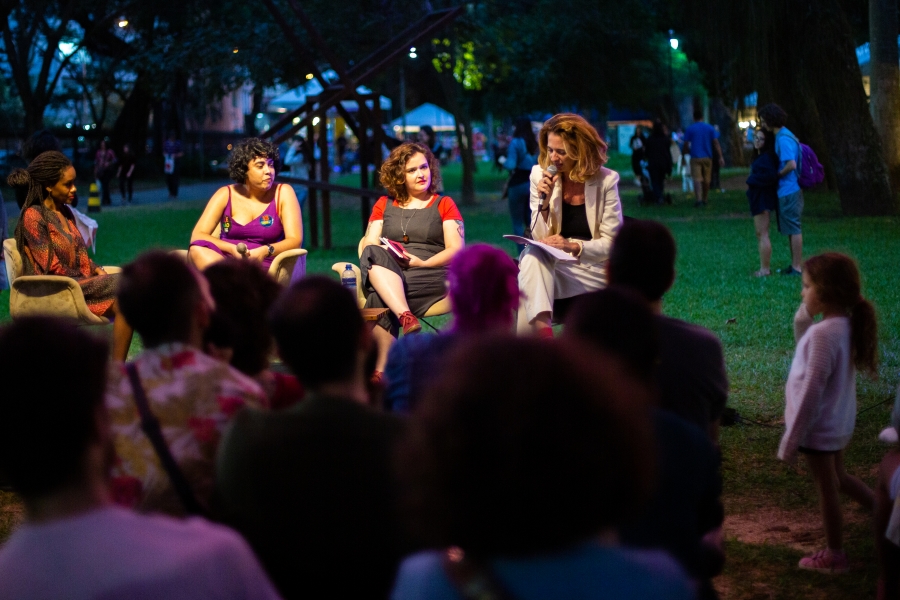 Poet Leticia Novaes reads her work during the Women Who Write presentation at the Spring Literary Festival in October 2018 in Rio de Janeiro.

In response, Xavier started a book club called Read Women in her hometown of Portalegre after learning about a similar group in São Paulo. Their monthly meetings began with a handful of people. Today, Read Women has grown to 70, including some men.

Related: Cuba could pull thousands of its doctors out of Brazil

Book clubs have emerged in other Brazilian cities in the past few years, and many of them focus on the country’s contemporary women writers. It’s a testimony to the fact that, “In the past decades, Brazilian women and minority writers became more visible as social movements, especially black feminist movements, demanded more representativity,” said Milena Britto, a PhD in Brazilian literature and a visiting scholar at the University of California, Berkeley.

“There is a huge difference when we look at how things were in the ’90s and how we see women in Brazilian literature today. Before, it wasn’t that common for critics to review books written by women. Today, we feel the presence and the recognition of many contemporanean women writers.”

Britto highlights how, in recent years, FLIP, Brazil’s main literature festival, has invited more women writers and showcased black women to meet a greater demand for new voices, experiences and perspectives crossing genre, race and class. Additionally, as democracy has matured in Brazil over the past 20 years, and more people have gained access to education, it has brought more visibility to women's and minorities’ work.

“In Brazil, recent laws from 2008 made it mandatory to learn about African and Indigenous cultures at school. Publishers became aware of this need; we began to see more diverse author profiles. They’re not just white men from Rio de Janeiro or São Paulo anymore,” Britto said. “Social demands in Brazil coincide with feminist demands.”

However, the recent presidential election, which put Bolsonaro’s ultra-right-wing government in power, has some in the literary community concerned about what it means for women’s voices. Bolsonaro, who publicly touts his anti-feminist stance, told a woman she was “too ugly to rape.” He has also said that women shouldn’t make as much money as men and that he has a daughter because he had a moment of “weakness.” Additionally, Bolsonaro wants to fight indoctrination at school, and he considers feminism as indoctrination.

“I’m scared we might see a setback. I’m very scared. The recent attempt at censoring Brazilian universities is a detour from what a healthy discussion should be.”

Soon after as he was elected, Bolsonaro asked students to “snitch on a teacher” and record their classes to stop “indoctrination” and prevent teachers from complaining about his victory. At some universities, teachers have seen their names posted on the wall — tagged with personal threats from people who say they will fight what they call “left-wing indoctrination.” Women, black people, Indigenous people, activists and even his political opponents are some of Bolsonaro’s rage targets.

“I’m scared we might see a setback," Britto said. "I’m very scared. The recent attempt at censoring Brazilian universities is a detour from what a healthy discussion should be."

The current political climate is a frequent topic for Read Women.

“We talked about it in our past meetings half-jokingly: ‘When they stop our meetings, what will we do if we have to meet in secret?’ We have talked about the repression feminist groups might face. We are actually really scared,” Xavier said.

Historically, preconceived notions of women’s role in society prevented many from seeing their names in the literary canon and today still condemns readers to a narrow view of women’s lives in Brazil and globally.

Literary inequality is at the root of the Brazilian Academy of Letters. The academy was created in the beginning of the 20th century, but only in 1977 was a woman allowed to belong to this prestigious institution for the first time. In 1910, one of the academy's founders was writer Júlia Lopes de Almeida, who was denied entrance and replaced by her husband.

This year, social movements got behind black woman writer Conceição Evaristo’s candidacy to one of its prestigious chairs. In Salvador Bahia, Insubmissible Dialogues of Black Women, which promotes black women writers, put out a petition with more than 20,000 signatures and organized protests to ask for Evaristo to be the first black woman to be honored by the academy. The 40-member academy, of which just four are women, did not vote her in. Critics point out that male politicians enter the academy by writing only one book.

Even so, Evaristo was this year’s highlighted author on ENEM — an important Brazilian national college entrance exam — alongside writers Angélica Freitas and Natália Borges Polesso. 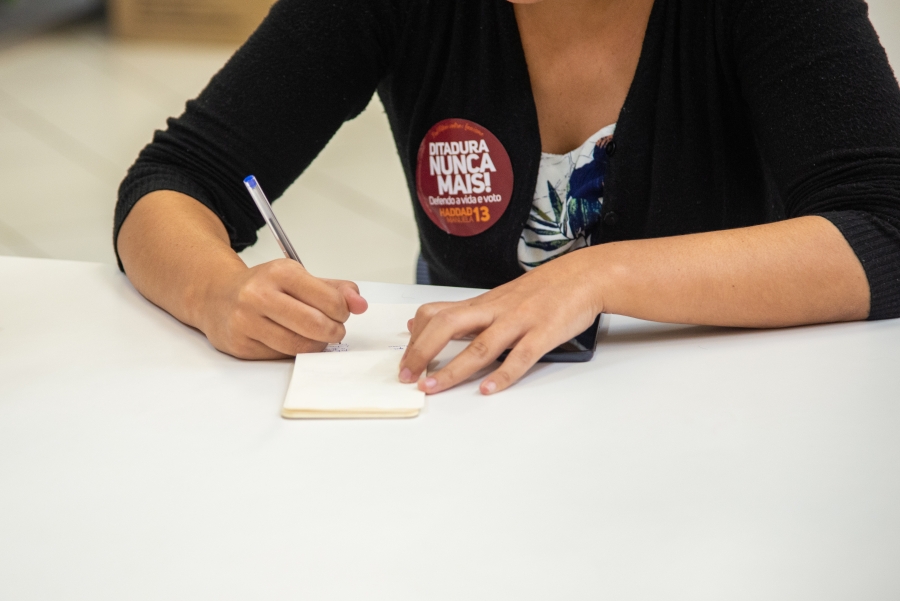 During the Women Who Write workshop at the Federal University of Rio de Janeiro, poet Cissa Khattar reads from her work. The sticker on her shirt says, "Dictatorship Never Again."

Bolsonaro criticized the exam for including feminist and gay authors.

“That ENEM exam, you’ll say I’m overreacting," he said in a Facebook Live address. "For the love of God, those issues, that particular language used by those people, what does that have to do with us, for the love of God? We see those words translated, it’s absurd. Will they be making young people become interested in these things for next year’s exam? You can be certain, you can rest assured, those questions won’t be there next year. We will vet the exam beforehand. This won’t happen again.”

“It’s hard to separate art and politics. Here, I feel like a warrior even though it is becoming kind of hard to survive.”

With speeches like that, “We worry about being able to keep our street events safe,” said Letícia Brito from Girls’ Slam, a network of “female poetic resistance,” which organizes poetry slams all over the country. “If people don’t read women, if people don’t read LGBTQ writers, they will never see them as equal; they’ll never realize they share many of the same experiences those people do. That really causes people to have low self-esteem because they don’t see themselves in that eurocentric pattern of a thin, blond, rich person.” 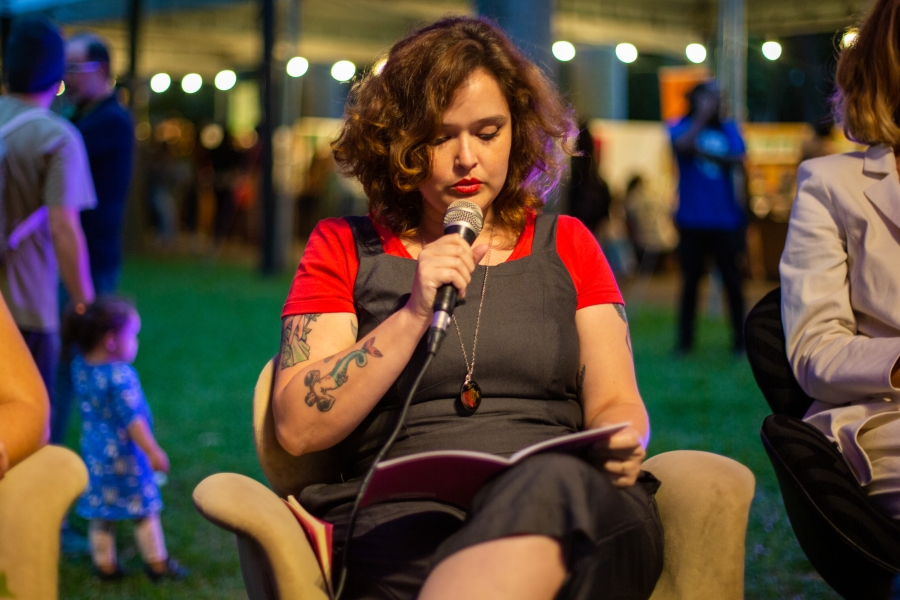 Poet Estela Rosa reads her work during the Women who Write presentation at the Spring Literary Festival in October 2018 in Rio de Janeiro.

“She was always around. With Marielle’s death, we realized we’re at the forefront of the battle; we can have our bodies killed and raped,” said Brito. “We know this election brought in fear. The president spreads out fake news. To his supporters, he is coherent and they just think we are alarmists.”

“To bring the work of contemporanean women to a university is a big deal in Brazil.”

Two years ago, poet Estela Rosa became a founding member of the group, Women Who Write, which hosts talks and a podcast and has been invited to set up a literary residence at the Federal University of Rio de Janeiro.

Women Who Write started out as a blog and has since gained a large, in-person following. Similar groups all over Brazil have also grown in numbers due to their online presence.

"We're talking about Brazilian women writing today. All these women are alive," said Rosa, who defines herself as a contemporary poet. Her poem, “The Figs,” got a prestigious off-FLIP award. "If men don't want to read what we write, that's OK. There are many of us, and we will read each other’s work; we need to read women; we need each other as a reference in our own writing and in our lives.”

“To bring the work of contemporanean women to a university is a big deal in Brazil,” said Cissa Khattar, a student with Women Who Write. “Women themselves take the first step to bring women into an academic setting.”

Khattar had a “Dictatorship Never Again” sticker on her black shirt.

“The revolution is here. At this table,” she said at a group meeting, reading her poem and letting the last lines sink in with the women around her.

“It’s hard to separate art and politics. Here, I feel like a warrior even though it is becoming kind of hard to survive,” said Letícia Ozório, a student in the group.

In the room, women from different backgrounds talked about other women’s work and discovered new references and inspiration for their own writing.

“That’s what I identify with," Benincasa said. "Men as literary critics can’t get to the bottom of what we’re talking about, there are deeper meanings. By reading other women’s writings, I ended up validating my own writing.”

Benincasa picked her poem, “so you can read carla diacov right.” She read the line: “How many women fit in this place? Answer: All of them.” 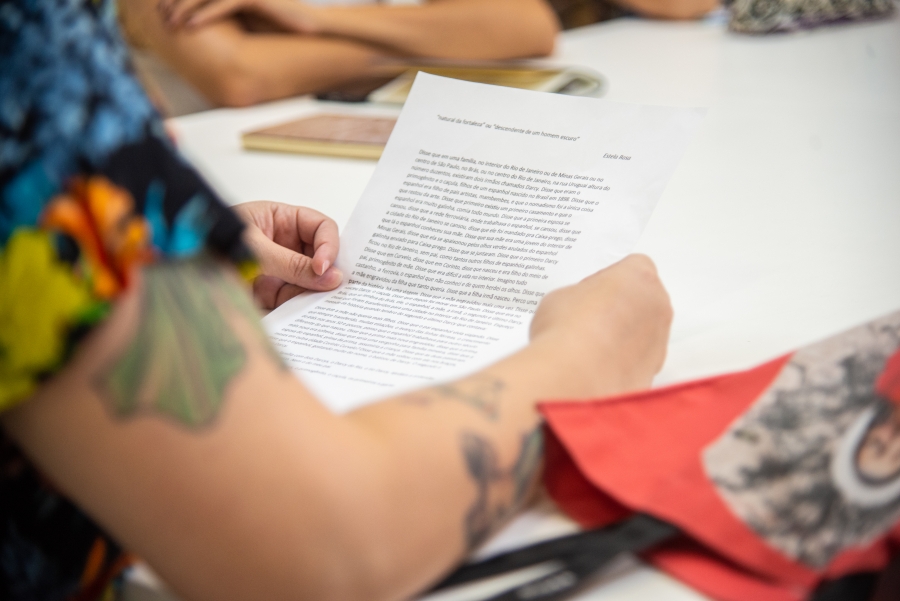 Brazilian poet Estela Rosa shares her latest work during the Women Who Write workshop meeting at the Federal University of Rio de Janeiro.