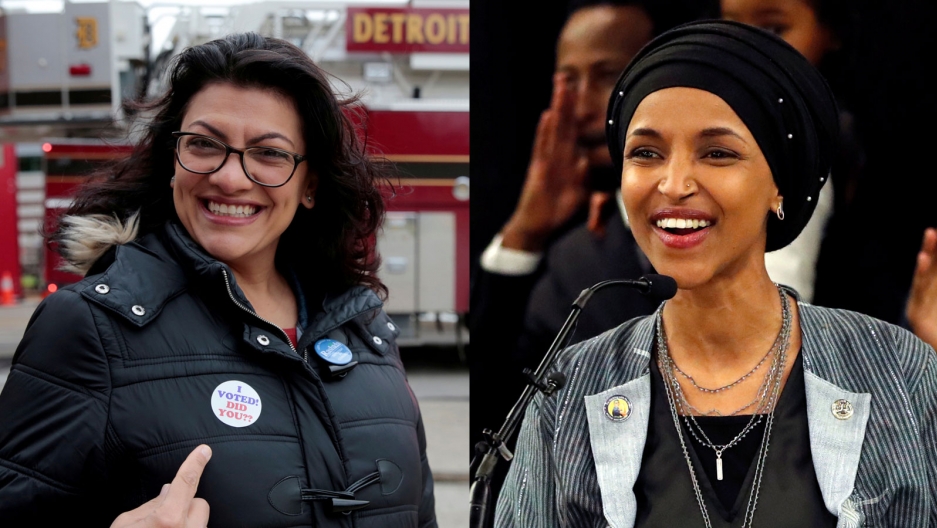 Congressional Representatives-elect Rashida Tlaib, left, and Ilhan Omar, right, will both use Qurans during their ceremonial swearings-in on Jan. 3, 2019.

The first two Muslim American women in Congress have been unapologetic about their faith from the start of their campaigns. Thursday’s swearing-in to the US House of Representatives was no different.

Rashida Tlaib, an American-born Muslim of Palestinian descent, was sworn in with her left hand on her own copy of the Quran, though she considered using a 1734 English translation that belonged to Thomas Jefferson. And Ilhan Omar, who arrived in the US 23 years ago as a refugee fleeing Somalia’s war, used the Quran of her late grandfather, who helped raise her.

New members of Congress are not required to take their oaths on the Bible or any other religious text. In fact, they need not swear on anything at all. Tlaib and Omar used the Qurans at individual, ceremonial swearings-in at the House speaker's office after the official, en masse swearing-in on the House floor.

Both Democrats, they are part of an extraordinarily diverse class of representatives — "transformative,” as Rep. Nancy Pelosi called them in her address after being elected House speaker Thursday. For many Muslim Americans, the presence of a Quran is a symbolic moment amid a presidential administration that has seemed to wage an all-out war on the triple whammy of what Tlaib and Omar represent: immigrants, Muslims and women.

Degha Shabbeleh, a suburban Minneapolis high school English teacher whose family was exiled from Somalia when she was a child, says it’s the first time she feels truly represented in national politics.

“To finally have women of color, or immigrants or second generation-Americans to be sworn in on a holy book other than the Bible — for me it personally validates that I do belong here, and this is home,” says Shabbeleh, who campaigned for Omar and flew to Washington, DC to attend Thursday’s swearing-in. “I personally needed that. Especially now more than ever, with all the bigotry going on and hatred that’s being exposed.”

Related: These are the women who made history in this year’s midterm elections

It’s not the first time members of Congress have been sworn in using the Quran. In 2007, former Democratic Rep. Keith Ellison of Minnesota — who was the first Muslim elected to Congress — used Jefferson’s Quran for his ceremonial swearing-in. Omar was elected to Ellison’s old seat after he stepped down to run for state attorney general and won. And Omar used a Quran when she was sworn in to the Minnesota House two years ago.

Tlaib ran for the seat vacated by John Conyers, who resigned over sexual harassment allegations. She lost in a special election to replace him but won the 2018 general.

Omar and Tlaib are joining Rep. André Carson of Indiana, a Democrat, for a total of three Muslim members of the House. Both Carson and Ellison have spoken on behalf of Muslim Americans, particularly as President Donald Trump instituted a travel ban affecting refugees and travelers from several Muslim-majority countries.

But the two women’s elections are notable for the diversity they bring to national-level representation of American Muslims, say faith and community leaders. Ellison and Carson, who are both black and grew up in the US, each converted to Islam as young adults. Omar and Tlaib grew up Muslim; Tlaib in an Arab community of Detroit, and Omar in a Kenyan camp for Somali refugees, then a Minneapolis neighborhood that is home to many Somali and East African immigrants.

“It’s important because Muslims are not one. We don’t all come from the same background and experiences,” says Robert McCaw, director of government affairs with the Council on American Islamic Relations (CAIR) in Washington, DC. “Now, with three different reps with three very different experiences, it gives us a more powerful collective and representative voice.” 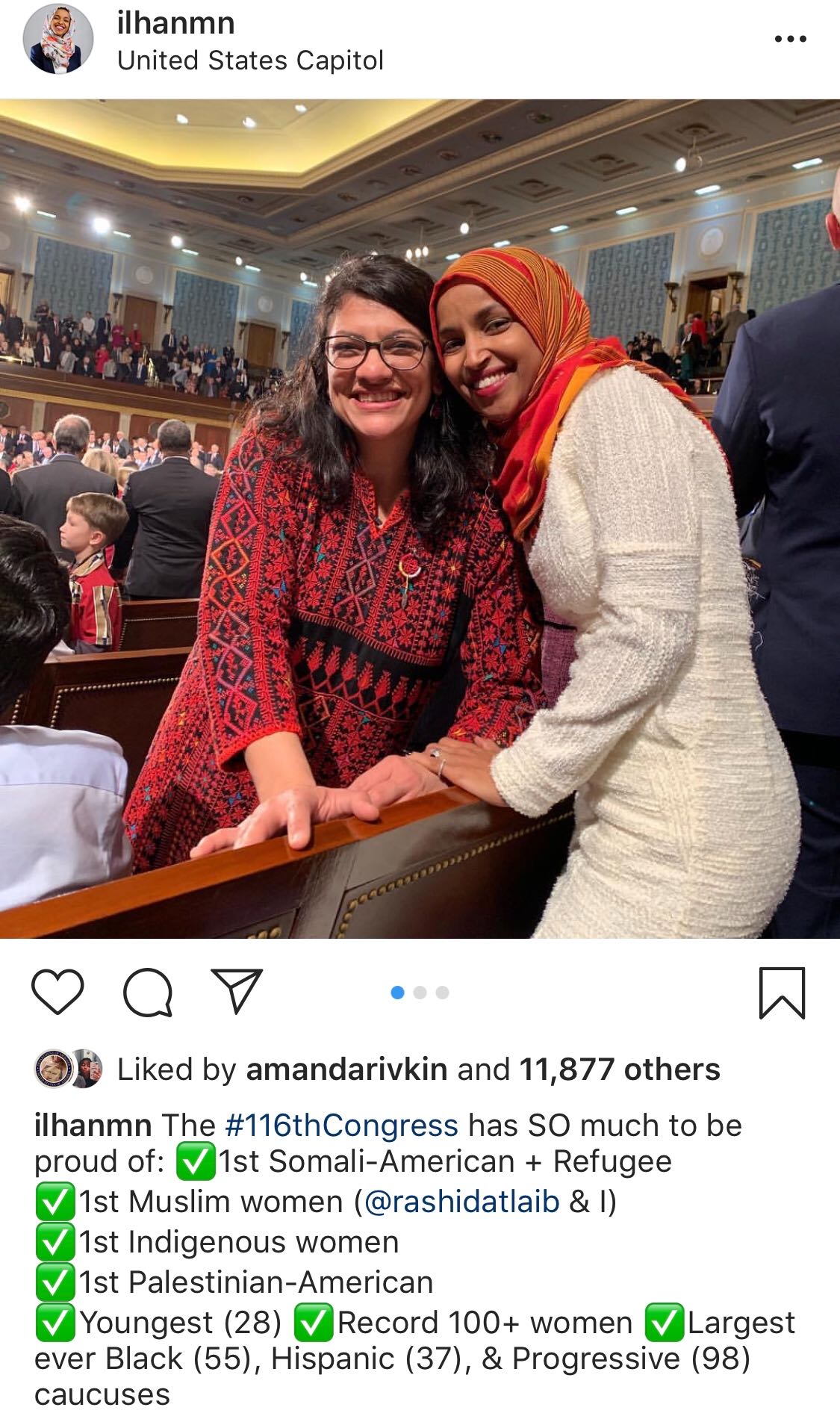 Omar, 37, is the first person in Congress to don the hijab, or Islamic head covering worn by many women. That makes her the first hijab-wearing member of the House, too. Shortly after being elected, she vowed to help lift the 181-year-old ban on headwear on the House floor.

Tlaib, 42, does not wear the hijab. Some hope their leadership will challenge stereotypes of Muslim women and show the hijab is an individual choice.

“There are so many parts of the Quran that preach about freedom and equality and preach about women being at the forefront,” says Sumaiya Ahmed Sheikh, executive director of the Michigan Muslim Community Council in Detroit and a friend of Tlaib. “People think of Islam as oppressing women. But the fact that there’s a Muslim woman wearing the hijab, swearing in on the Quran, shows women are at the forefront of these movements and have always been. It’s a lesson there’s no way Muslim women are oppressed.”

Asha Noor, a Somali American activist with CAIR’s Michigan chapter in Detroit who has worked with both Tlaib and Omar, called Thursday a “big moment” for Muslim women across the world.

“That representation is especially important for younger generations to see that Muslims can ascend to leadership unapologetically and not have to compromise who they are to do that,” she said. “The swearing in on the Quran, our divine revelation, and having our faith tradition be part of the opening chapter of your leadership is a bold statement, and it’s part of that unapologetic representation.”

Their election is controversial in some quarters of the US. Last month, a conservative Christian pastor singled out Omar and complained on his radio show: “The floor of Congress is now going to look like an Islamic republic.”

Omar shot back on Twitter: “Well sir, the floor of Congress is going to look a lot like America...And you’re gonna have to just deal.”

Well sir, the floor of Congress is going to look like America...

And you’re gonna have to just deal 😂 https://t.co/mHQzj34ZTn

“They’re very aware of not being token first Muslim women,” says Rami Nashashibi, founding executive director of the Chicago-based Inner-city Muslim Action Network, whose acronym, IMAN, is the Arabic word for faith. “They’re coming in with these extraordinary global-local narratives and are uncompromisingly grounded in their Americanness while being refugees, Palestinian and Somali — and that’s what’s so inspiring for Muslims and non-Muslims.”

‘Muslims were there at the beginning’ of America

Tlaib announced last month she would use Jefferson’s Quran and wear a Palestinian traditional dress called a throbe.

“It’s important to me because a lot of Americans have this kind of feeling that Islam is somehow foreign to American history,” she told the Detroit Free Press. “Muslims were there at the beginning.”

Indeed, the history of Muslims in America goes back to before the country’s founding. The Founding Fathers specifically included Islam as they established the principles of religious liberty. At least 10 percent of the millions of Africans brought to the US as slaves were Muslim, according to historians, and many practiced their faith even after being forced to convert to Christianity.

About 3.45 million Muslims now reside in the United States, or about 1.1 percent of the US population, according to Pew Research Center. The rapidly growing group is set to overtake Jews as the United States’ second-largest religious group after Christians by 2040.

With such numbers, “we should be beyond this point in American Muslim history of having to validate our narrative,” Nashashibi says. But the current political climate means they must defend themselves constantly.

“Hey, Ilhan’s dad here,” he started. “Twenty three years ago, my family and I arrived at an airport in Washington DC. We were newly arrived refugees in this country, from a refugee camp in Kenya. [...] I could never have dreamed that twenty three years later I would return to the same airport with my daughter Ilhan by my side, the day before she is to be sworn in as the first Somali-American elected to the United States Congress.”

“I wish Ilhan's grandfather could be here to witness this historic moment,” he continued. “He will be here in spirit as Ilhan will place her hand on his Quran for the ceremonial swearing in.”

Omar has previously credited her grandfather with teaching her about representative democracy and inspiring her career in politics. He arrived in the US with Omar, her father and siblings in the mid-1990s, and used to bring along Omar, then 14, to translate for him at Minnesota Democratic party meetings.

Update: An earlier version of this story stated Rep. Rashida Tlaib was sworn in using a 1734 English translation of the Quran that belonged to Thomas Jefferson. She changed her mind and used her own Quran on Thursday, according to the Detroit Free Press.