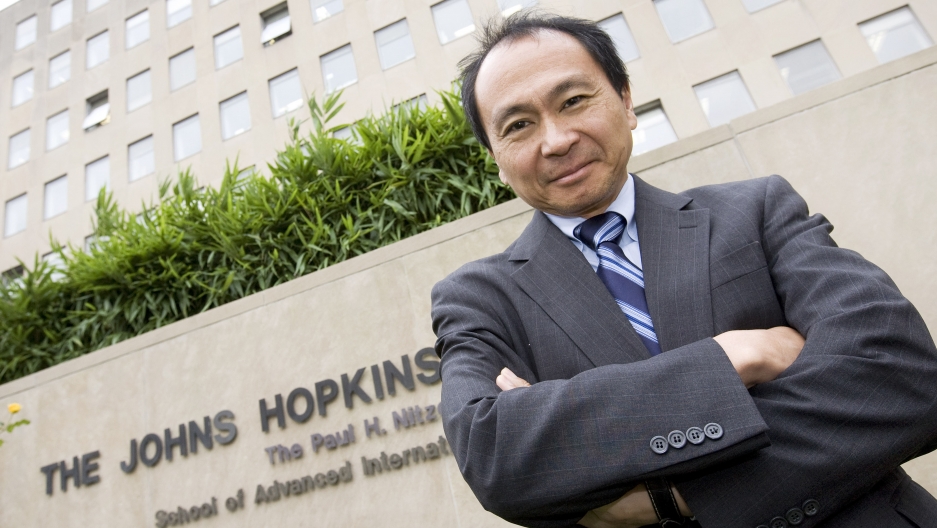 Francis Fukuyama at the Paul H. Nitze School of Advanced International Studies at the The Johns Hopkins University in Washington DC, Oct. 8, 2008. In his latest book, "Identity: The Demand for Dignity and the Politics of Resentment," the political scientist says a cultural revolution is underway.

This year we saw three European leaders under stress. In France, tens of thousands of protesters in yellow vests demanded that President Emmanuel Macron step down. In the UK, both sides of the Brexit debate deserted Prime Minister Theresa May. And in Germany, Chancellor Angela Merkel lost control of her party.

All three leaders presided over countries that are deeply divided. And just like in the United States, the divisions are really emotional.

Political scientist Francis Fukuyama has written about it in his new book, "Identity: The Demand for Dignity and the Politics of Resentment."

Fukuyama sat down with The World's Carol Hills to go over the identity politics of 2018.

You've given me a new word to learn in Greek it's spelled t-h-y-m-o-s. What is it?

Thymos, yes. Well, it's usually translated in English as "spiritedness" but it really refers to the part of the human psychology that demands respect.

And how does it apply to the troubles in France, the UK and Germany?

I think that a lot of the populist revolt that's been going on in all of the countries you mentioned, the Brexit voters that wanted to get out of the European Union, saw their country filling up with foreigners which they blamed on the EU and they wanted to have control but they felt the elites were not listening to them. In France, the yellow jacket movement are people that don't live in Paris, aren't these cosmopolitan types that benefit from globalization. And they felt that the gas price hike was hurting them. And finally, in Germany, there was a big backlash to Angela Merkel's welcoming of Syrian refugees in 2015 by a lot of ordinary Germans that felt that this was going to change their national culture and their national identity in ways that they didn't like and the elites weren't listening to them. And in all of those cases you had groups of voters that felt they weren't being listened to, they were invisible to the elites. That's why they were angry and that's why they went out to either vote or protest in the way that they did.

How do identity politics in the US differ from the examples you mentioned in Europe?

I think that in a certain way, the sociology is the same and so you have a similar group of people that live in less populated areas that haven't benefited, and in fact, have actually been hurt by globalization. You know, the job loss and the outsourcing and deindustrialization that's occurred in many industrial heartland states. So that's similar. What's different I think, though, is what American identity is, to begin with. Because the US was always a much more diverse country than all of the countries — especially those in Western Europe that actually had a single religion and a single ethnic identity. The United States started out that way. But as you had successive waves of migration, we became much more diverse. And I think Americanism began to reflect that diversity.

You're concerned about identity politics. Let's take the US. What concerns you?

The reason I wrote this book on identity was that you've now seen the rise of a right-wing identity politics. If you want to know what that means, just look at the behavior of Donald Trump before the Nov.  6 midterm election. He was advised to campaign on his tax cuts and the fact that the economy was doing great. And instead, all we heard about was this horrible migrant caravan and taking away birthright citizenship and sending the military to the border to protect us from these terrorists trying to get into the country. I mean that's really an example of what we mean by identity politics are shifting the conversation away from economic policy to these identity issues, where essentially your identity is fixed by your birth — by the ethnicity and the religion and the characteristics of your parents. And I just think it's very hard to have a democracy under those conditions. It feeds the polarization in the country, which I think is our single biggest vulnerability right now.

I think partly because they're not that diverse. In all of those countries, you had a very distinctive national identity that was formed hundreds of years ago — in China's case, a couple millennia ago. And you've had an ethnic homogenization of those populations. And then further, they don't permit immigration. None of those countries welcomes immigrants. And so as a result, you don't have the kind of ethnic cleavages that exist in immigrant communities in Western democracies. And therefore you don't have the backlash movement, but you do have a certain form of populism. I think that all of those countries, in a sense, do have a certain craving for strong leadership that has some similarities to the things that are going on in other parts of the world.

When you talk about the kind of lean toward a strong government leadership, are you thinking of that historically or as part of the trend that we're witnessing now in places that used to not be strong leaders and now the sort of trend toward populism and authoritarianism?

No, this is absolutely part of the current trend. I think that one of the characteristics of populist politics is charismatic leadership. This means that the leader establishes a personal relationship between himself or herself and the people. And that makes them anti-institutional and that's the real threat, I think, to democracy. Because democracy is not just about getting elected by voters, it's also about a constitutional system that limits power through a system of checks and balances. And virtually all of the new populist leaders that have arisen, like Viktor Orban in Hungary for example, have been anti-institutional in that sense. They don't like the courts. They don't like a critical media. They don't like anything that gets in the way of their agenda and therefore they try to dismantle it. And you know, I'm sorry to say, but our president is the prime example of this.

Do you ever worry that liberal democracy as we've known it is kind of on the way out? Are you concerned at all that we're kind of slowly evolving into something else here in the United States or do you think that's kind of overblown?

I definitely worry that the quality of our democracy is decaying. This is something that has started way before the 2016 election. I think with the rise of money in politics and the increasing polarization of the political system, it's just not been functioning properly. But I do think that the country has been through worse patches — like the period before the Civil War was pretty bad and it actually led to the country falling apart. And yet, the country managed to get through that. And I think you're seeing already a kind of blowback to the blowback emerging. I think the Nov. 6 election was a repudiation of Trump's brand of populist politics. And hopefully, that's a trend that will continue.