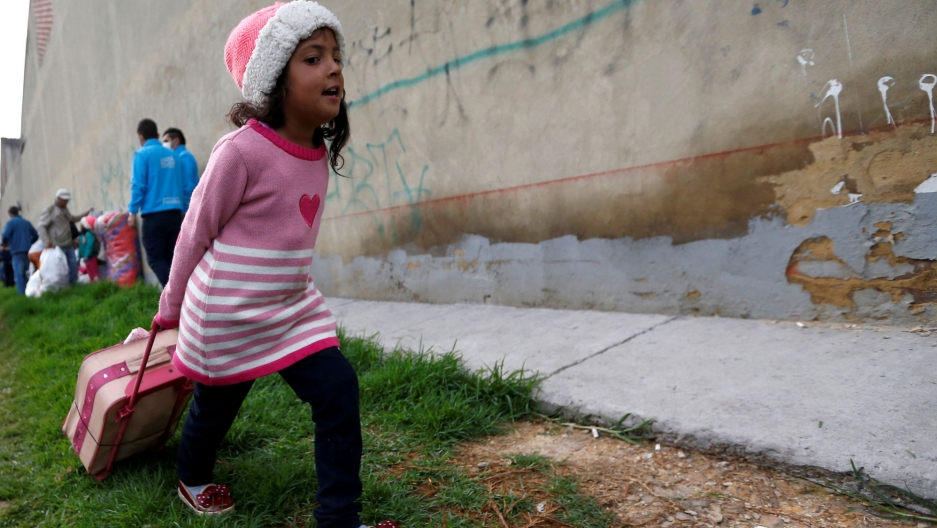 A Venezuelan migrant girl heads to the exit of a makeshift camp with her belongings in Bogota, Colombia, Nov. 2018.

For a year, Colombian Marnellis Muentes and her neighbors have opened their small homes in a hilltop slum to dozens of Venezuelan families.

Muentes was forced to flee during Colombia's conflict and feels a moral duty to help Venezuelans fleeing political turmoil and economic meltdown in their homeland.

But the Venezuelan crisis now threatens to overwhelm Colombia and other countries in South America and is likely to test their good will in 2019 as migration and asylum claims from other Latin America nations, in particular Nicaragua, pick up.

About 3.3 million people have fled Venezuela since 2015 and the United Nations estimates about two million more, from a population of 32 million, could follow in 2019.

"I know what it's like to have to leave home with nothing. I've experienced the suffering, the hunger, Venezuelans are going through," Muentes told the Thomson Reuters Foundation.

"It breaks my heart seeing children beg for food. I had to do something to help," said Muentes, who provides free shelter in her home in the border city of Cucuta.

Every day, about 5,000 Venezuelans leave home, according to the United Nations, in one of the biggest exodus of people in modern South American history.

In total about one in every 10 people in Venezuela have fled their country in the past three years, with about one million now living in Colombia, 500,000 in Peru, 222,000 in Ecuador, 130,000 in Argentina and 85,000 in Brazil, as well as tens of thousands living in several Caribbean islands.

"There's a sense of solidarity, which is very admirable," said Jan Egeland, secretary general of the Norwegian Refugee Council.

"The 35 countries in Europe collectively panicked because one million people came to 35 countries in 2015 across the Mediterranean. Now five nations in Latin America received three million and they still haven't closed the borders."

Yet there are signs the solidarity and good will is waning in countries already battling poverty and weakened economies.

"There's no adequate education or assistance programs, which means that there will be more social tension within the group and between the groups, in the host communities," Egeland said.

With the highest number of Venezuelans living in neighboring Colombia, its schools, hospitals and other services are struggling to cope.

Rising numbers of Venezuelans are seen begging at city traffic lights, sleeping rough in parks and in tent settlements.

According to the Colombian government, the influx of Venezuelan immigrants costs Colombia about 0.5 percent of its gross domestic product per year — equivalent to $1.5 billion.

While most Colombians, like Muentes, are sympathetic to the Venezuelans' plight, xenophobia has increased, including reports of attacks against migrants.

Tensions between locals and migrants are also increasingly strained in Ecuador, where the government has said it needs about $550 million to provide aid to migrants.

In Brazil, which shares a border with Venezuela and where more than 65,000 Venezuelans have requested asylum so far, tensions have also flared up.

In August in Brazil's border town of Pacaraima, security forces were sent in after camps of Venezuelans were set ablaze.

Since the exodus began in 2015, countries in South America have largely kept their borders open to Venezuelans but there are signs that is changing.

This month, Chile refused to sign a UN migration pact aimed at improving migrant integration and protection. Chile also now requires Venezuelans to apply for entry at consulates in Venezuela and to show a passport, which many do not have.

The UN has appealed for $738 million in 2019 to help Venezuela's neighbors as so far South America has been on its own.

"I think the humanitarian response and funding, and even diplomatic interest, in this crisis has really lagged behind," said Amanda Catanzano, senior director of advocacy at aid group, International Rescue Committee.

"The scale of the crisis is staggering, the magnitude and impact are still not understood. It's growing. And that's not sustainable in the absence of a coordinated regional response, the likes of which we really haven't seen yet."

Poor diplomatic relations between Venezuela and its neighbors, in particular Colombia and Brazil, mean such a regional plan is unlikely to materialize anytime soon.

"We basically need now to talk with other — whether that's with the opposition, neighbors and north to south," Egeland said. "There must be a regional effort."

Elsewhere in Latin America, thousands of migrants from Central America, mainly El Salvador, Honduras and Guatemala, leave their homes every year, fleeing gang violence, poverty and joblessness to seek a better life in the United States.

"It's entire families. It's not anymore the youngest, the strongest," said Francesca Fontanini, spokeswoman for the UN refugee agency (UNHCR).

The hardline immigration policies of President Donald Trump have seen record numbers of parents travelling with children being apprehended trying to cross the US border with Mexico.

Cashing in on Trump's tough stance are human smugglers, known as coyotes, who now charge double for the trip — $10,000 a person, Fontanini said.

"The journey up north is much longer, more risky," Fontanini said. "Since Trump, it's much more difficult to cross the border."

A new migrant crisis is unfolding in Nicaragua, where more than 300 people have been killed since April as the leftist government of Daniel Ortega has responded, often brutally, to anti-government protests.

The crackdown has led to tens of thousands of Nicaraguans, many of them students, travaling to neighboring Costa Rica. More than 23,000 have applied for asylum.

"They were lucky because Costa Rica immediately opened the doors," Fontanini said.

Nicaragua has regained some stability, but Ortega's refusal to agree to a referendum on holding early elections in a bid to calm opposition means further unrest is likely.

What is certain is the exodus will continue, said Muentes.

"As long as people don't feel safe and have no food, they will keep coming. They have no other choice."