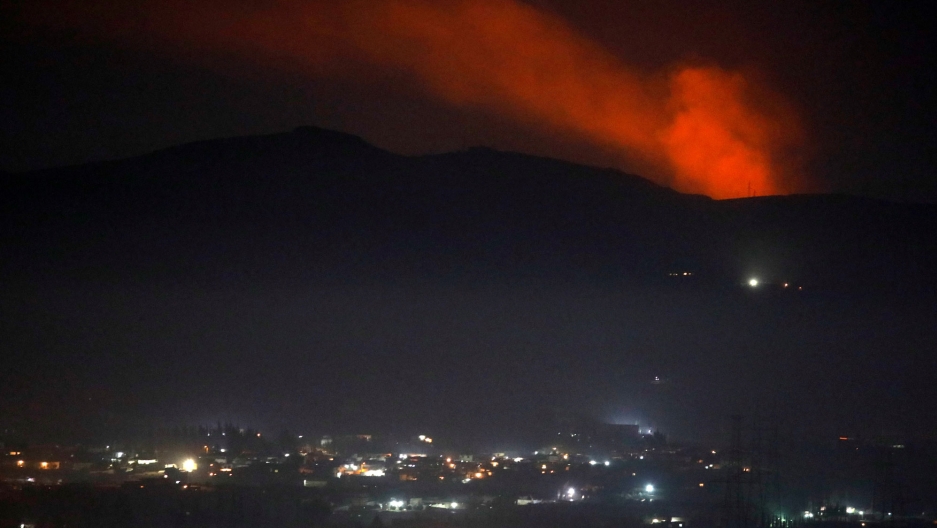 Smoke rises past a mountain as seen from the Damascus countryside, Syria Dec. 25, 2018.

"Our air defenses confronted hostile missiles launched by Israeli war planes from above the Lebanese territories and downed most of them before reaching their targets," the  military source said.

An arms depot was hit and three soldiers were injured due to the attack, the source added.

The nature of the Israeli missiles targets was unclear.

The ministry, which did not specify which flights had been threatened, added that Syrian air defenses had destroyed 14 of 16 Israeli missiles launched against unspecified targets near Damascus on Tuesday.

The Israeli military declined to comment on the reported missile strikes and the Russian allegations.

Addressing a graduation ceremony for new pilots at an Israeli air force base on Wednesday, Prime Minister Benjamin Netanyahu made no direct reference to specific attacks or Moscow's criticism.

But he reiterated Israel's intention to prevent "Iranian military entrenchment, which is directed against us" in Syria.

"We will act against it, vigorously and continuously, including during the current period," Netanyahu said.

An Israeli military spokeswoman also declined to comment on the reports.

The Syrian Observatory for Human Rights, a UK-based war monitor, said Israeli missiles were launched from above the Lebanese territories and targeted western and southwestern Damascus rural areas.

"A number of missiles hit arms depots for Hezbollah or Iranian forces," the observatory said. No casualties or losses were reported.

During the more than seven-year conflict in neighboring Syria, Israel has grown deeply alarmed by the expanding clout of its arch enemy Iran — a key ally of Syrian President Bashar al-Assad.

Israel's air force has struck scores of targets it describes as Iranian deployments or arms transfers to Lebanon's Iran-backed Hezbollah movement in the war.

Reporting by Hesham Hajali in Cairo, Kinda Makieh in Damascus and Dan Williams in Jerusalem; Writing by Dahlia Nehme; Editing by Edmund Blair and Leslie Adler.