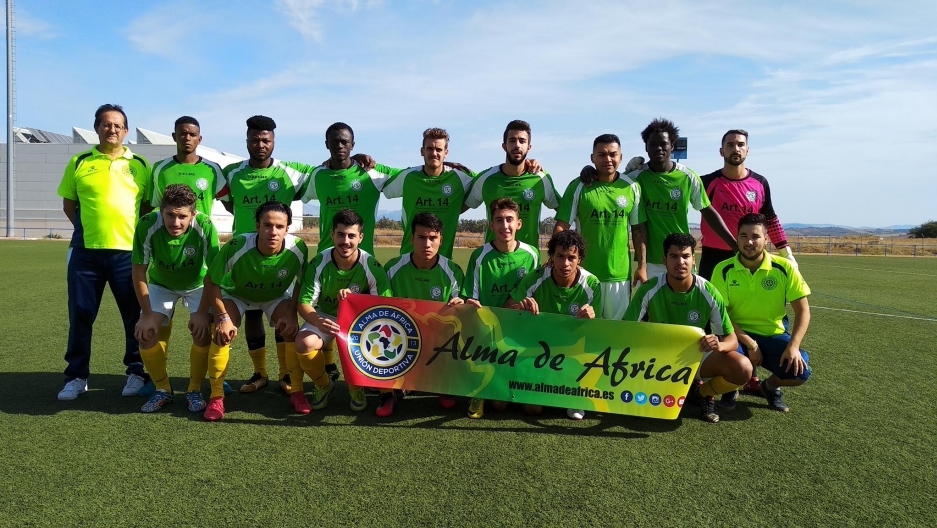 Alma De África soccer team of immigrant and Spanish players pose for a team photo in Jerez de la Frontera, in the southern region of Andalusia.

On a Friday morning, Alejandro Benítez interrupted his work to drive across Jerez de la Frontera and help Issa Abdou with a parking ticket. Abdou greets him with respect, almost like a father figure. He affectionately refers to him as “presi,” short for president. When Abdou needs help with something, he calls Benítez. And Benítez usually doesn't say no.

Benítez is the president of Alma de África, a soccer team of immigrant and Spanish players in Jerez de la Frontera, in the southern region of Andalusia. Abdou, known as Karim, is a Cameroonian player on the team.

Four years ago, Benítez, a former professional soccer player, decided to help a group of immigrant friends who played pickup soccer in an open field. He had the idea of creating a professional team that would work as an experiment for migrant integration. That’s how Alma de África, “soul of Africa,” was born.

“We built the team around those African immigrants. Some migrants associations in Jerez told us to include Spanish players to promote the integration from within,” Benítez said.

Benítez is now the club’s president. Although he has a job as a real estate and insurance agent, Alma de África has become the center of his life.

“I invest a lot of family and work time in these players. I do it voluntarily because I believe I have a responsibility towards them. My reward is their happiness and the fact they have the chance to feel equal to everyone else here,” Benítez said.

That resonates deeply with Abdou, who hasn’t seen his family in 18 years.

The Cameroonian was 10 years old when he said goodbye to his parents and started a long journey north. He dreamed of becoming a soccer star in Spain. It took him nearly 10 years, but he finally made it to Spain in 2007. Although he isn’t a soccer star, he’s usually the captain of Alma de África, which includes 25 players of 15 different nationalities as well as locals.

Spain is probably the most welcoming European country for immigrants now. In a 2018 Pew Research Center Survey, 86 percent of Spanish adults supported taking in refugees fleeing violence and war. But in Andalusia, there’s growing frustration that their region has become the new frontier for those trying to reach Europe. And there’s no clear plan on how to accommodate them.

Susana Díaz, the former leader of the regional Andalusian government, called on the national government to “distribute the immigration effort” among all the regions, particularly in the case of unaccompanied minors, the region’s biggest challenge. Andalusia is caring for approximately 36 percent of the 11,174 unaccompanied minors who arrived in 2018. “This is a collective and shared responsibility,” she said.

Faced with the highest unemployment rates in the country and a surge in arrivals, some in Jerez are turning against migrants. For months, services that work with migrants have been warning about a breaking point and a shift in attitudes.

“There seemed to be a pact of silence among politicians so as not to stir hatred towards migrants, but that pact has been broken after some of them made public, anti-immigration statements. And now, you hear regular people complaining that migrants are stealing their jobs and their money,” said Michel Bustillo Garat, a social worker who helps migrants in Jerez de la Frontera.

That might help explain why an anti-immigrant party won 12 seats in the Andalusian parliament in December — the first time a far-right party made it into the government since Spain became a democracy in 1978.

Benítez is worried about the rise of anti-immigrant sentiment, but he’s not happy with Spain’s integration model either, which he says treats migrants like children.

“The system gives them everything, like housing and job training, without demanding commitment from their side. They grow accustomed to getting everything for free,” said Benítez.

Alma de África players are no exception, he says. The club doesn’t have enough money to pay the players. Most of them scrape by with seasonal jobs as beach vendors or construction workers. Benítez veers between feeling responsible for them and resenting them for demanding too much.

“Some are suspicious we are using them to make money; others believe they should be paid like Messi or Cristiano because they believe all players are paid in Europe. This creates tension. It’s disappointing, sometimes,” said Benítez.

There’s some disappointment in Abdou’s voice as well when he talks about his life in Spain. When he’s not playing with Alma de África, he’s watching soccer on TV. He has never had a steady job in the 12 years he has lived in Spain, and he’s not working now.

Abdou says he left Cameroon filled with high hopes. Not long after he arrived in Spain, he realized he had made a mistake, he says.

“If I knew then what I know now, I would have stayed with my family. Life here is tough; it’s not what we think it is. We waste a lot of time here,” Abdou said.

Related: The razor wire that separates Europe from Africa might be coming down

Abdou is ambivalent about Spain. But he says he can’t go back. For better or for worse, Spain is home now. And besides being his family, Alma de África is his reason to get out of bed every morning.

“I have a family here, a big family. Sometimes we fight, but that's soccer. The truth is, when we don't have a job, if we have something to do, we get up with a purpose. And that means something,” Abdou said.

For the moment, Abdou is not worried about the populist threat. Right now, he’s focusing on fulfilling a new dream — having come to terms with the fact he’s not going to become a soccer star.

“I want to become a coach to start a soccer school in Africa. I want to show them they can play soccer there, that they don’t need to come to Europe to fulfill their dreams. In Europe, time is money. In Africa, time is freedom,” Abdou said.