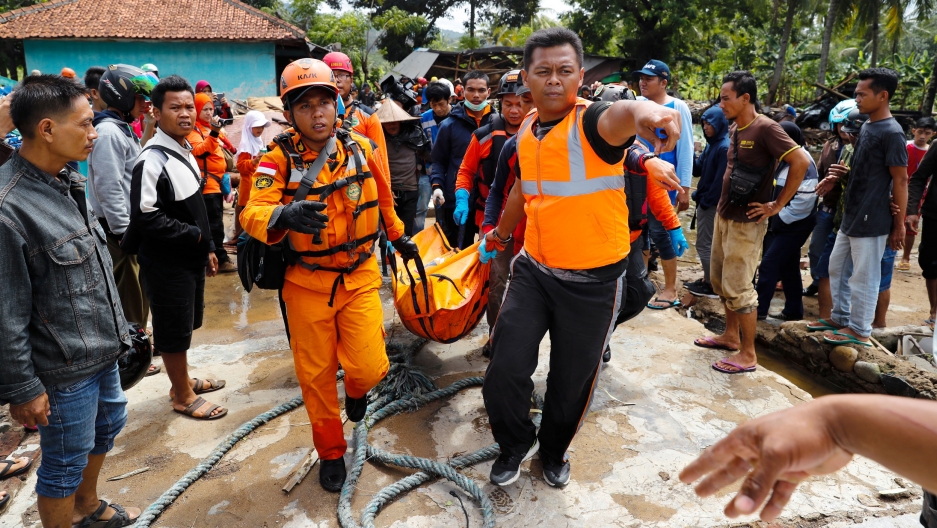 Rescue workers carry a body bag containing the remains of a victim of the tsunami in Pandeglang, Banten province, Indonesia, on Dec. 24, 2018. Hundreds were killed when a tsunami was triggered by underwater volcanic activity.

Indonesian military and rescue teams fanned out across a stretch of coastline on Monday, hoping to find survivors of a tsunami triggered by an underwater landslide from a volcano that has been erupting for months.

Authorities called for vigilance amid the spewing of ash by Anak Krakatau, a volcanic island where a crater collapse late on Saturday together with a high tide set off waves that smashed into coastal areas, killing at least 281 people.

Rescuers using heavy machinery and their bare hands searched through debris, pulling out bodies in the worst-affected areas on the west coast of Java island, where and hundreds of soldiers and volunteers looked for victims along a 60-mile stretch of shore.

More than 1,000 people were injured and about 12,000 residents had to move to higher ground, with a high-tide warning extended to Wednesday.

The vast archipelago, which sits on the Pacific "Ring of Fire", has suffered its worst annual death toll from disasters in more than a decade.

Earthquakes flattened parts of the island of Lombok in July and August, and a double quake-and-tsunami killed more than 2,000 people on a remote part of Sulawesi island in September.

President Joko Widodo visited the affected area on Monday and praised the authorities for swift action in responding to the latest disaster.

"The speed and accuracy in the field is to be appreciated," he said. 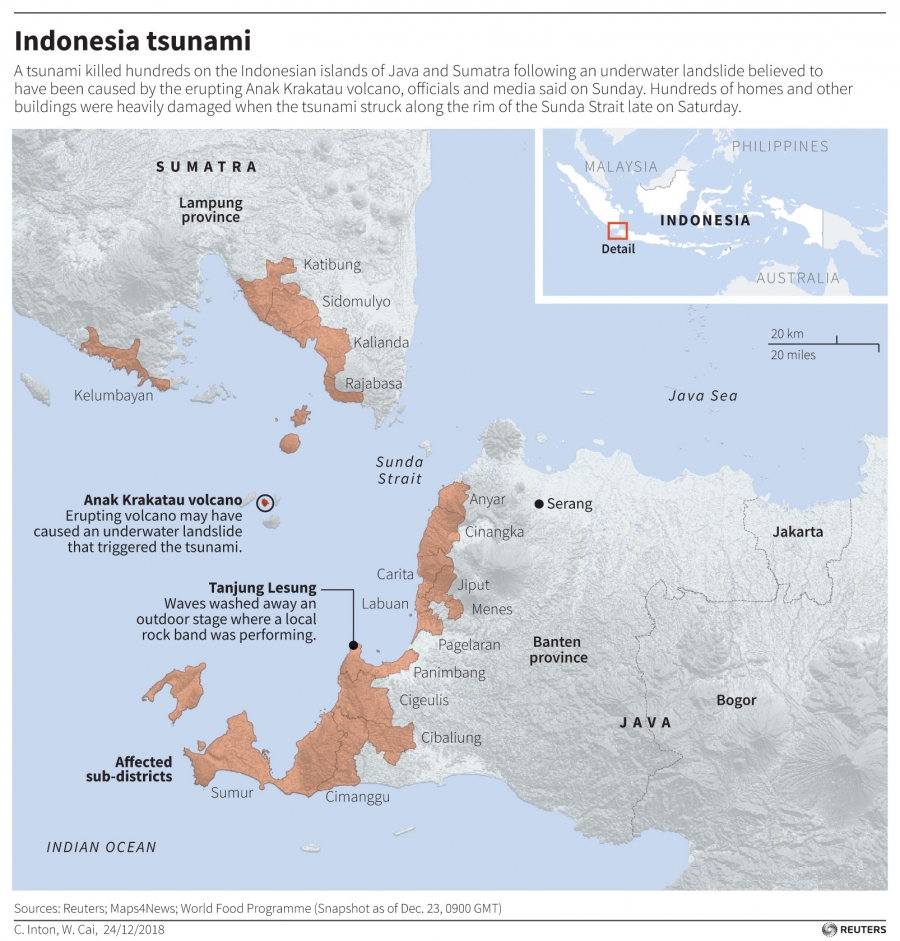 Saturday's tsunami came with almost no warning and destroyed more than 700 buildings, from small shops and houses to villas and hotels. The time between the landslide and waves hitting the coast was just 24 minutes.

Dented vehicles were crushed together by a wave that carried chunks of metal, felled trees and left roof tiles, wooden beams and household items strewn across roads. Some cars ended up in rice fields.

Nurjana, 20, dashed to the mountains after the tsunami hit. Her beachside snack stall was washed away.

"I opened the door straight away and saved myself. I jumped over the wall," she said. "Everything is destroyed."

Aerial video footage of the Sunda Strait between the islands of Java and Sumatra showed Anak Krakatau (Child of Krakatau) still erupting on Sunday night, with sustained bursts of white smoke and ash filling the sky.

The meteorology agency estimated the collapsed area of the volcanic island, once known as Krakatoa, was about 64 hectares, or the size of 90 soccer fields.

Scientists had earlier said an underwater landslide was the likely cause.

Krakatau erupted in 1883, killing more than 36,000 people in a series of tsunamis. Anak Krakatau is the island that emerged from the area in 1927 and has been growing ever since.

The high waves isolated hundreds of people on Sebesi island, about 7.5 miles from the volcano.

"We are completely paralyzed," Syamsiar, a village secretary on the island, told Metro TV, calling for food and medicine.

Widodo, who is running for re-election in April, told disaster agencies to install early warning systems, but experts said that unlike with tsunami caused by earthquakes, little could have been done to alert people that waves were coming.

"Tsunamis from volcanic flank collapse are generated right at the coast and often close to populations," said Eddie Dempsey, lecturer in structural geology at Britain's University of Hull. "The interval between the volcanic collapse and the arrival of the waves is minimal."

The timing of the disaster over the Christmas season evoked memories of the Indian Ocean tsunami triggered by an earthquake on Dec. 26, 2004, which killed 226,000 people in 14 countries, including more than 120,000 in Indonesia.

Families streamed out of the area on Monday for fear of further tsunami, jamming roads already blocked by debris.

Fishermen told how a light breeze was followed by a huge wave that smashed together wooden fishing boats moored off the coast and pulled down the trees they were tied to.

Excavators were being used to move debris and wreckage, including piles of steel roofing tangled like spaghetti. Medics were sent in with the military, while groups of police and soldiers reached remote areas.

A team of volunteers who worked on disasters in Lombok and Palu pulled bodies out of damaged beachside retreats.

"This year has been pretty busy. The disasters have been more severe," said Muhammad Idris, who led the team. 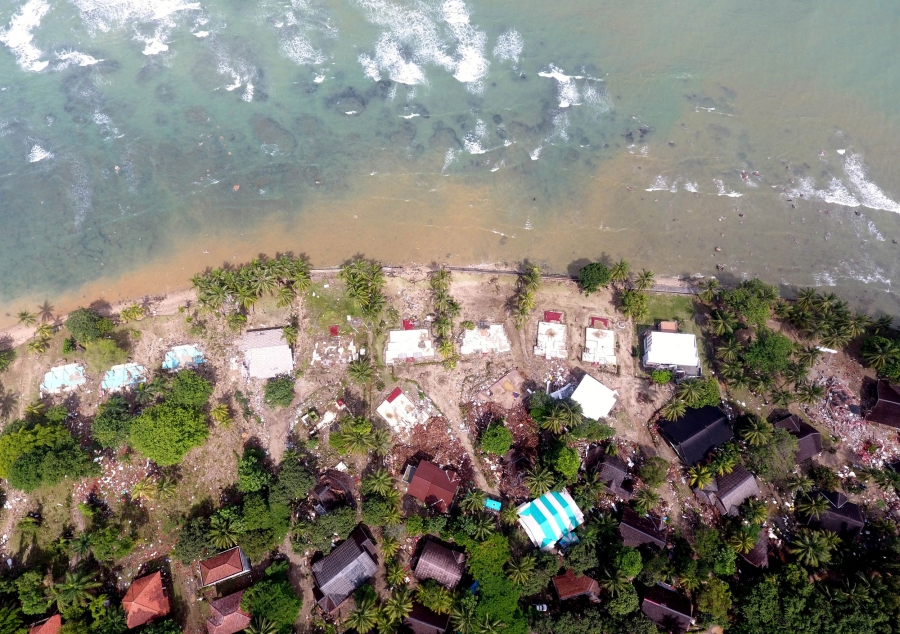 An aerial view shows the damage after a tsunami hit Carita district in Pandeglang, Banten province, Indonesia, on Dec. 24, 2018.

Television footage showed how the tsunami washed away an outdoor stage where Indonesian rock band Seventeen was performing for about 200 guests at a party for utility company Perusahaan Listrik Negara (PLN).

Cici Paramita, 27, remembers hearing volcanic eruptions on Saturday afternoon, as she in front of her house about 165 feet back from the beach but said they were "not unusual."

But then she heard an "extraordinary" rumbling.

She dashed inside to save her year-old baby and later found her other child, 8, alive among the wreckage outside.

"I was afraid for my life," she said.